Modeling graphene oxide (GO) at the atomistic scale remains an exciting challenge due to the variety and the complexity of the different GO surfaces. A reliable microscopic model of this fascinating 2D-material would improve the understanding of its numerous properties, more particularly in water.
MOUHAT Félix
Postdoctoral researcher, Ecole Normale Supérieure
Follow
Like

Graphene oxide holds great promise for water purification applications, though its chemical reactivity in water is yet to be clarified. Here the authors show by first principles molecular dynamics that graphene oxide structures with correlated functional groups and regions of pristine graphene are t…

When I started my postdoctoral contract at the École Normale Supérieure (Paris, France), with ML Bocquet and F-X Coudert, we decided to study the chemical reactivity of graphene oxide (GO) in liquid water, with or without charged species (ions) in the liquid.

To reach that purpose, it was first necessary to generate a realistic GO layer. The difficulty started already because unlike the prototypical graphene layer, the GO layer is ill-defined at the atomic scale: how many oxidized functions present on the surface? Their nature? Their spatial arrangement over the graphene sheet?

We therefore generated different GO replicas, with the exact same chemical composition where epoxides and alcohol functions (see Figure below) are grafted randomly either  on the entire graphene layer or on half of it. Using the Density Functional Theory (DFT) approach, we established that the GO replicas where the chemical functions tend to cluster are more stable, in agreement with recent experimental data (Raman spectroscopy, solid NMR).

Figure 1: GO+water system in the simulation box. Periodic boundary conditions are applied but not represented here for the sake of clarity. Image performed with the Visual Molecular Dynamics software, version 1.9.3.

Then, we concentrated our efforts on the most stable GO replicas among the generated structures. We placed them into a simulation cell with liquid water solvating the GO layer at room temperature (T = 300 K).

To ensure the relevance of these preliminary ab initio Molecular Dynamics simulations, I decided to track the evolution of the GO+water system using a vizualisation software. I had the surprise to observe that the GO surface was unexpectedly reactive, even in the absence of charged species in the liquid.

Identifying such reactive events would not have been possible without a state-of-the-art description of the electronic properties of this material. Therefore, from now on, we know that:

This work opens the way for more extensive ab initio studies of the GO and analogues in different conditions: influence of the confinement thickness on the water dynamics, charge effects induced by the presence of other ionic species...

The paper can be found here: https://www.nature.com/article...

The authors acknowledge funding from the Horizon 2020 FETOPEN project NANOPHLOW number 766972. This work was granted access to the HPC resources of TGCC and CINES under grants A5-A0070807364 and A0070807069 by GENCI. We also thank Vasu Kalangi and Lydéric Bocquet for insightful discussions about GO membranes. 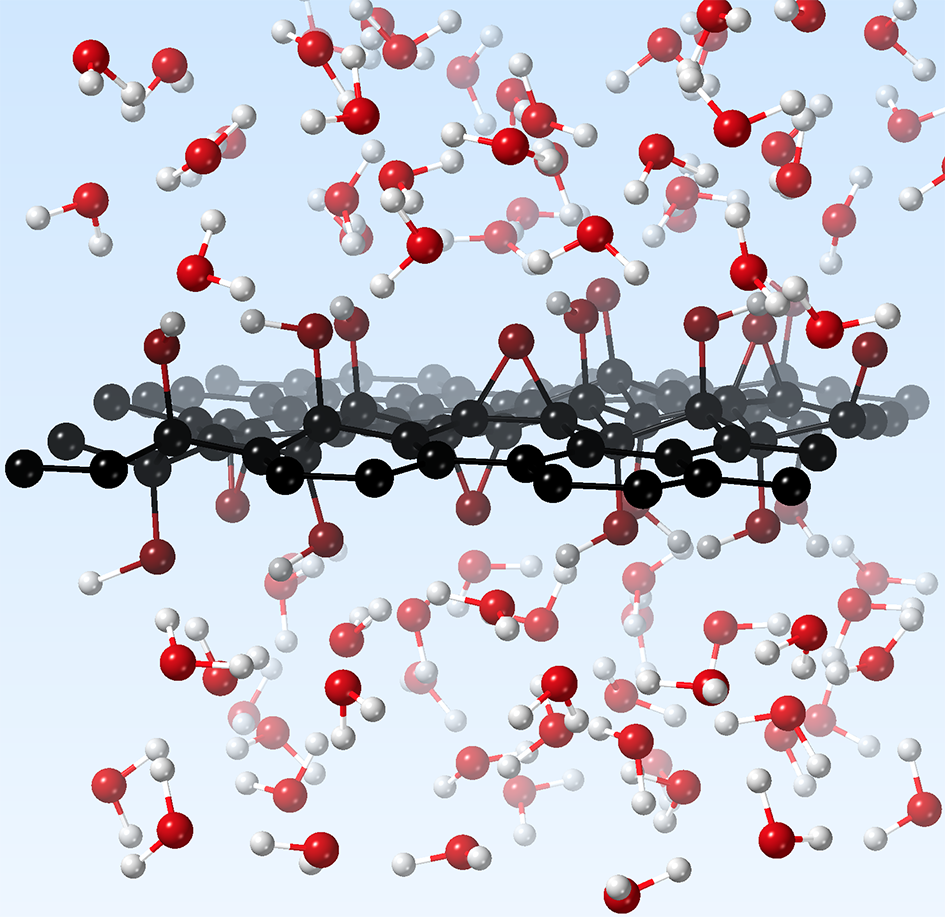 Modeling graphene oxide (GO) at the atomistic scale remains an exciting challenge due to the variety and the complexity of the different GO surfaces. A reliable microscopic model of this fascinating 2D-material would improve the understanding of its numerous properties, more particularly in water.