Knowledge about the interface synergism for better catalytic activity in core-shell particles now apprears quite incomplete according to our latest discovery via combination of multiple in situ methodologies that the core shell configuration can no longer exist during real reactions.

For many years, bimetallic particles have been always companied with the ‘core-shell’ configuration in my mind since I headed for exploring the nano-world using the microscopy skills as a graduate student interested in how a nanostructure grows. Indeed core-shell particle is a sort of well-defined catalytic material and it has attracted tremendous interests in a variety of heterogeneous and electrochemical reactions due to the distinct advantages: on one hand it lowers the noble metal consumption thus reduces the cost by limiting its coverage to a few atomic layers, while on the other hand it enhances the catalytic performance via the core&shell synergy in aspects of both the electronics and geometry. The above knowledge could never be wrong before we turned our eyes on a NiAu bimetallic architecture to see whether it has the same manner as what former researchers observed. The CO2 hydrogenation was used as a probe  when we found Dr. Zhaoxuan Wu who had just built up a delicate reaction evaluation system. Our discussion aroused an interesting question that for the CO2 reduction, a Ni catalyst favors methane while the Au adsorbs carbon monoxide (CO), what would come out for a Ni-Au system?

With curiosity, we started the project from the NiAu synthesis. Months of effort was spent on this step even with referring to previous reports full of fabrication details; it reminded me there’s a wide gap for a microscopist between dictating atoms to assemble particles and just imaging them. Fortunately, we were able to obtain grams of NiAu catalyst uniform in both the size and composition under the sight of transmission electron microscopy (TEM). The moment of getting the performance results was full of surprise when we found the CO selectivity stayed as high as 95% in the wide temperature range for a ~90 a.t.% Ni catalyst. We immediately turned to HAADF-STEM on the spent catalyst, observing a typical core shell structure with atomically thin Au shell covering a nickel core. Such core-shell structure had been found – not only after reaction – but also before reaction. In the front of the structural evidences from double-side of the reaction, it turns out a simple, clear and persuading picture as we imagine the whole story by attributing the interesting CO production to the atomically thin gold shell. After getting partial FTIR results, Dr. Bing yang and I had agreement about pushing this well-designed, perfectly-satisfied, nice pictured discovery forwards into a manuscript before Dr. Meng Gu giving the call to offer an opportunity to examine what we found on their environmental TEM. From then on, the whole story changed when the in-situ observation demonstrated the NiAu particles lost their core-shell configuration during working in a 9 mbar CO2+H2 gas atmosphere. Being surprised but still suspicious, we sought more in situ supports. The in situ HAADF imaging at reaction pressures from 2 Pa to 1 bar clearly confirmed the absence of Ni@Au core shell but forming the NiAu alloy phase at the particle surface. Up to this stage, new story gets clear that it is the alloy surface that accounts for the activity, but it’s viewed in the microscopy aspects. To touch the nature of catalysis, one has to find solid correlation between such microscopy discovery and the overall catalytic performances through a quantitatively statistic technique of directly characterizing the atom neighboring without electron irradiation influence while allowing to load real reaction condition. The X-ray absorption spectroscopy (XAS) seems to be the best choice. After Dr. Guanghui Zhang worked out the EXAFS data confirming Au-Au coordination number reduced to ZERO when catalyzing the reaction at 550 °C, I realized our story had changed from a microscopy discovery to a catalysis one. Finishing all the experimental efforts for this fantastic truth, questions still remain: what drives Ni atoms to the particle surface and why the NiAu alloyed surface yields CO but not CH4? Thanks to Prof. Yi Gao and Dr. Bei’en Zhu who flew to my Lab twice to have face-to-face discussions before they worked out via elaborate simulation efforts (also fully supported by our in situ FTIR results) that it is the CO adsorption that helps to stabilize Ni atoms on the surface and the roll-over of CO adsorption from Ni to Au before desorption ascribes to the uncommon high selectivity of CO product.

Written behind the publication of this work, we feel lucky for having the chance of combining multiple in-situ techniques to reveal the hidden face of bimetallic catalysis during reaction. The catalysts could change during reaction and evolutionary design strategy based on the in situ or operando information are highly required. Particularly for the NiAu case, it remains our interests since NiAu composition keeps changing as reaction temperature ramps, why these continuously evolved surface structures yield identical product selectivity? More work to be done for Xiaoben Zhang and Shaobo Han in front of our advanced microscopes. 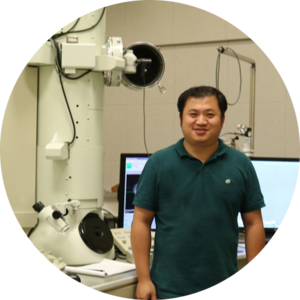 Electron microscopy has served as a unique methodology in directly observing materials at nano- or even atomic scale. Deeply rooted in surface chemistry and nanotechnology, demands from catalysis study have been driving the combination of traditional microscopy techniques e.g. analytical electron microscopy, high-resolution microscopy with the capability of loading real working conditions, denoted as ‘in situ microscopy’, aiming to correlate structural dynamics with the catalytic reaction performances. To try to touch the nature of catalysis rather than encounter a fantastic microscopy discovery. I focus my main efforts on seeking reliable connections between a statistic and spectroscopic descriptions about catalytic behaviors and the localized details extracted from the big data of in situ microscopy. It is a methodology issue to turn the microscopy capability to face to the urgent catalysis demands.
Follow