Single-atom catalysts (SACs) has recently emerged as a new frontier in catalysis science and has attracted increasing attention in academic and industry. However, in most cases, the metal atoms were only deposited on the surface of the bulk support materials. Although the metal species were fully reflected, their corresponding bulk supports were not utilized as much. Besides, even SACs exhibit improved catalytic performance, it remains a challenge to produce such catalysts on a large scale owing to the present low production efficiency. On the other hand, due to the microenvironment of the single-atom active species exposed on the surface of supports, mostly limited to the conversion of small molecules, such as hydrogen, carbon monoxide and water. Classical organic transformation catalyzed by the single-atom catalyst is still rare. We anticipated that the applications of single-atom catalysts can be extended to much broader chemical transformation reactions.

In this work, we have developed a new Pd single-atom catalyst embedded in bimetal oxides, ZnO-ZrO2, via an in-situ coprecipitation method in a multi-grams scale. Aberration-corrected HAADF-STEM and the extended X-ray absorption fine structure (EXAFS) tests verified the atomic distribution of Pd in the catalyst Pd-ZnO-ZrO2.

The newly synthesized Pd single-atom catalyst was systematically studied as a catalyst for the classical C–C coupling reaction. Compare to the corresponding single metal oxides as support (Pd-ZnO, Pd-ZrO2), a significant synergetic effect of ZnO and ZrO2 was observed for the bimetal oxide supported catalyst. The title single-atom Pd catalyst exhibited excellent catalytic performance for the phosphine-free Suzuki-Miyaura cross-coupling reaction at room temperature in air, which is a break-through compared with the previous reports. Systematically characterizations demonstrated that the active sites are Pd single atoms coordinated with two oxygen atoms. The turn over number was up to 62,500 for the reaction between bromobenzene and p-tolylboronic acid in a single run. This catalytic system can tolerate various substrates with moderate to very high reaction yields. The catalyst can be reused multiple times without any activity decreases. The facile synthetic procedure of the new catalyst, milder reaction conditions, and high stability of the catalyst endow this single-atom catalyst great potential in real-world applications. 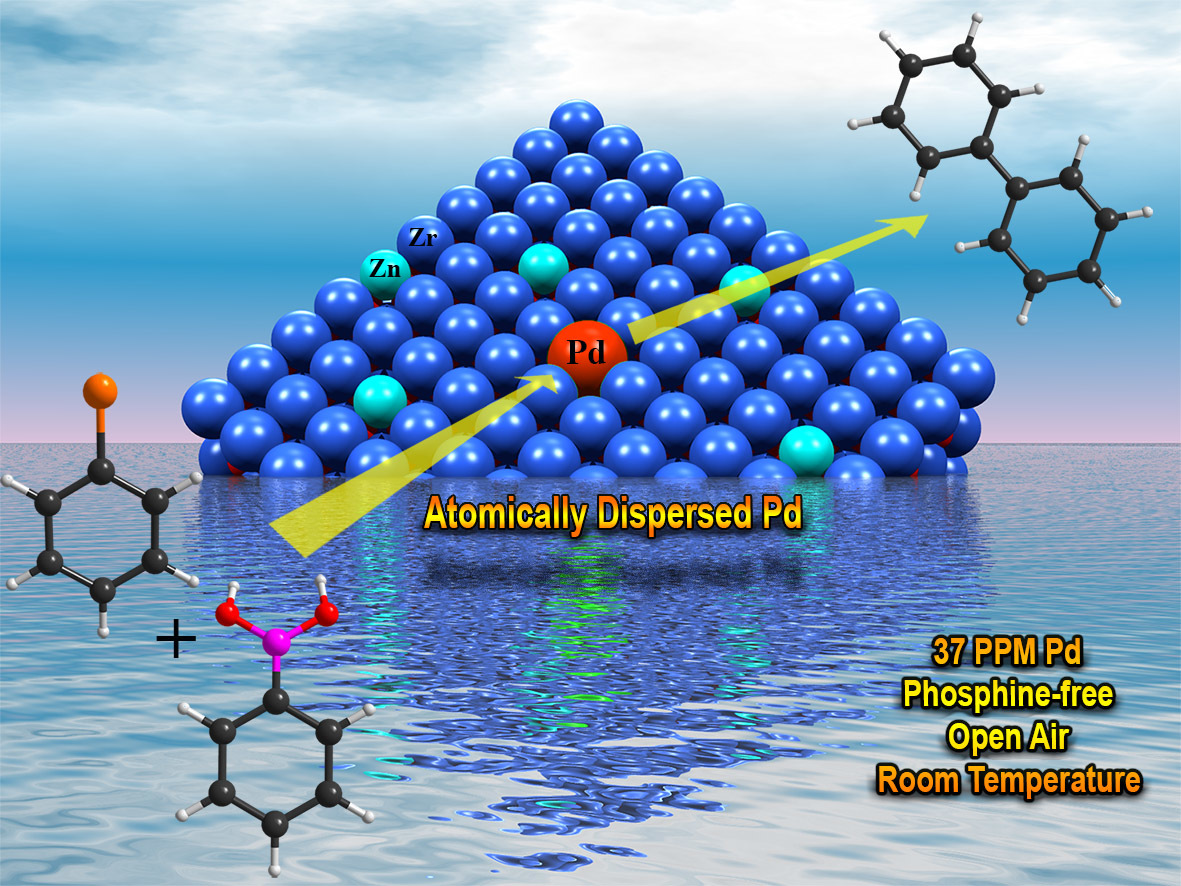