Carbon-carbon bond formation is one of the most fundamental steps currently needed for the synthesis of organic molecules, including essential drugs. Cross-coupling reactions meet these necessities and among them, the Suzuki-Miyaura (SM) reaction played a major role since its discovery in 1979, reflecting the mild conditions required. Generally, the SM reaction requires a catalyst based on palladium that activates a carbon-halogen bond which then becomes accessible to a transmetalation agent, boronic acid, releasing the desired C-C bond by a reductive elimination step. Solid catalysts are usually a good choice for preparing molecules of interest at industrial scale due to the easy catalyst recovery (e.g. filtration/centrifugation) and lower operative costs. Many solid catalysts, including palladium nanoparticles stabilized on several supports (e.g. metal oxides, polymers), have been prepared to serve this purpose for the SM reaction. The use of solid catalysts, rises to the question whether the catalytic cycle occurs at the catalyst surface (heterogeneous phase) or in solution (homogeneous phase), in the latter case mediated by leached metal particles. Finding the correct answer is not merely important from a mechanistic point of view, but it has significant consequences for large scale synthesis, since leaching processes often result on unwanted traces of toxic metal on drugs, thus raising the operative costs for purification and catalyst recovery.

Recently, single-molecule fluorescence techniques have been applied for elucidating challenging catalytic systems.1-3 Tracking molecule by molecule the catalytic product formation makes it possible to monitor and quantify single catalytic events that occur during chemical reactions at a solid catalyst. Our group has largely contributed in this field by employing TIRFM (total internal reflectance fluorescence microscopy) in click reaction (CuAAC) heterogeneously catalysed by copper nanoparticles (CuNP). By using FRET pair consisting of alkyne and azide group linked to a fluorescent probe, it has been possible to confirm that the CuAAC reaction occurs mainly in the surface of CuNP and the contribution of homogeneous catalysis is low than 5 %.4

In this work, we employed TIRF microscopy in an attempt to unveil whether Pd nanoparticles supported on TiO2, Pd@TiO2, act as active catalytic sites or rather as reservoir of Pd species that catalysed the SM reaction in solution. We designed a chemical system where a fluorescence probe, based on a BODIPY chromophore, switches its emission from green to red upon catalytic reaction with the transmetalation agent, 2-thienyl boronic acid. Classical bench scale experiments routinely used to distinguish heterogeneous from homogeneous catalysis gave apparent contrasting results. Order in catalyst, Hg(0) poisoning, and filtration tests supported an heterogeneous mechanism, while kinetics studies at lower Pd loading, molecular oxygen effect on reaction yield and detection of Pd in the reaction supernatant (in ppb range) seemed to indicate a leaching process ongoing in SM reaction.

To explore at the molecular level, a methanol solution of green reactant (pM range) was flowed over a coverslip coated with Pd@TiO2 and numerous bursts have been recorded within catalyst aggregates by exciting with 488 nm laser. After adding the boronic acid, the solution was flowed over the coverslip and several fluorescence emitters, caused by the catalytic generation of product molecules, have been detected by exciting the product with a red laser (632 nm). While it has been observed that the formation of product occurs on the catalyst surface, co-localization inspection between reactant and product molecules with the help of super-resolution analysis, raised the question about the mobility of the active catalytic sites. Indeed, by employing a high-performance microscope that ensures focus stability for hours, we observed a loss and a new generation of active catalytic sites within Pd@TiO2 aggregates. A novel experiment design, where Pd@TiO2 and pristine TiO2 are both present but separated about 3 mm in the same coverslip, clearly showed a Pd transport process, since numerous product emitters have been detected in the pristine TiO2 side by flowing the reaction mixture on the above-mentioned coverslip.

In conclusion, single molecule fluorescence studies showed that the active catalytic sites are mobile rather than fixed onto the support, likely due to a Pd transport process. Importantly, TIRF microscopy demonstrated that the catalytic sites, atoms or small clusters of Pd, are active once landed back to the TiO2 support, highlighting the heterogeneous -yet mobile- nature of the catalytic system investigated.

If you want to know more about this work, please read our article “Real-time fluorescence imaging of a heterogeneously catalysed Suzuki–Miyaura reaction” in Nature Catalysis. 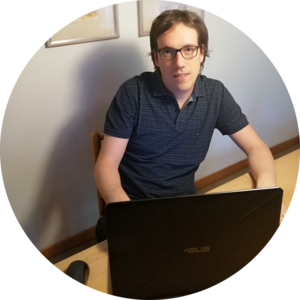