Upon discovering a previously unknown phenomenon, scientists are faced with an important task: to name the thing they’ve discovered. Should it be christened with a name that attempts to succinctly describe the behaviour? Like ‘superconductivity’ or ‘gluon’ which are names that indicate the nature of the underlying phenomena. Or opt for a literary reference as in the case of ‘quarks’ named after the line “Three quarks for Muster Mark!” in James Joyce’s largely nonsensical novel Finnegan’s Wake.

In the history of science it is unfortunate that phenomena are sometimes given names that in hindsight seem unhelpful or misleading. This is the case for topological defects which, due to the inherently negative connotations of the word ‘defect’, sound like something quite undesirable. This negative-sounding name detracts from the mathematical richness and useful technological applications of topological defects.

Topological defects are not, in themselves, defective. They are in fact ubiquitous in ordered physical systems found throughout nature. Many of you will be familiar with defects in crystal lattices, some of which are topological defects. But they are also studied widely in particle physics, condensed matter physics and cosmology, and play a crucial role in explaining the properties of a wide range of materials including the strength of steel and the conductivity of semiconductors.

So what are topological defects in liquid crystals? Let’s aim to get an intuitive understanding by using some aquatic friends.

Consider a 2D pool full of fish. These fish are thin, but quite long, so they tend to prefer swimming in a shoal where they all point in the same direction. Especially when there is not much space in the pool. These fish are an analogy for the behaviour of liquid crystal molecules that are widely used in TVs, monitors and phone screens.

Now let’s hypnotise the fish around the edge of the pool to be completely stationary and point towards the right side of the pool. We are imposing a boundary condition.

We now put the rest of the fish that haven’t been hypnotised into the pool and find that they tend to settle into a pattern that looks like this:

Now, as an experiment, what happens if we hypnotise the fish at the edge to follow each other head-to-tail?

When we fill the rest of the pool with unhypnotized fish, they will now circulate in a clockwise pattern.

But what happens if we put a fish in the exact centre of the pool?

It won’t know what to do! Should it swim up, down, left or right? There is no right answer. This is because the exact centre of this pool is a topological defect. It is a point of disorder in this otherwise ordered shoal of fish. If you place the fish anywhere else in the pool, it will know what to do and follow its aquatic brethren.

It’s possible for the defect itself to drift around the pool a bit but there is no way to remove the topological defect from the pool completely without relaxing the ‘boundary conditions’ (the hypnotised fish around the edge).

Liquid crystals are long and thin organic molecules which behave in a similar way to these fish. The rod-like shape of the molecules results in self-organising behaviour (just like the shoaling fish) and also leads to interesting optical and electrical properties that make them so suitable for use in displays.

In our paper “Electrically-Tunable Positioning of Topological Defects in Liquid Crystals” we impose 3D boundary conditions with a laser microprinting technique, creating microscopic polymer structures that freeze the liquid crystal molecules in place to generate topological defects. These laser-fabricated polymer structures are just like the hypnotised fish around the edge of the pool. Then by applying a voltage to the liquid crystal we can also tune the defects, controlling their position and dynamic behaviour.

Usually, the processes that govern the formation of defects and points of disorder in liquid crystals are largely random. But our technique shows it is possible to precisely control the formation and stabilisation of such defects, bringing order to disorder.

Over the past few years, there have been some brilliant demonstrations of the uses of defects in liquid crystals in the self-assembly of nanomaterials[1], optical vortex generation[2] and tunable metamaterials[3]. Defects have even been used to bring order to the disordered and chaotic movement of swimming bacteria dispersed into a liquid crystalline environment[4].

We hope that our paper will bring further attention to the fascinating area of topological defects and that our fabrication technique will enable future technological applications which go a step further in bringing order to disorder in liquid crystals.

Check out our open-access paper “Electrically-tunable positioning of topological defects in liquid crystals” in Nature Communications. 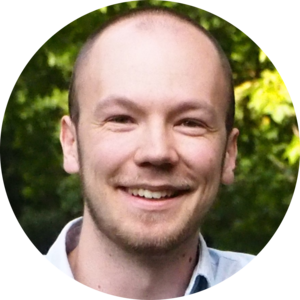 PhD student at the University of Oxford working on next-generation Soft Matter Photonics technologies. My research brings together laser micro-machining and the science & technology of liquid crystals & polymers. I use a titanium-sapphire femtosecond laser to create microscale polymer structures directly inside electrically-controlled liquid crystal devices. In 2019 I was awarded the Institution of Engineering and Technology's Leslie H. Paddle scholarship.
Follow