Blue holes are unique depositional environments that are formed within carbonate platforms, under the influence of global sea-level rise and fall (van Hengstum et al., 2019). They are commonly characterized as ecosystems with steep biogeochemical gradients and distinctive microbial communities, due to their relatively enclosed geomorphology and restricted water exchange (Pohlman, 2011). For the past three decades, studies have described vertical gradients in physical, chemical, and biological features of the water columns of blue holes. Yet elemental cycles, especially carbon cycling, remain poorly understood in these environments.

The Yongle Blue Hole (YBH), located in the Xisha Islands of the South China Sea (SCS) has been known and respected by ancient local Chinese fishermen for hundreds of years as a dragon hole with dark blue color and immeasurable depth. In July 2016, the YBH was announced to be the deepest known blue hole on Earth. A team leaded by the director of the Sansha Track Ocean Coral Reef Conservation Research Institute of China (STO), Mr. Liang Fu, found that the YBH has a depth of ca. 300 m, far deeper than the previously recorded deepest blue hole, Dean's Blue Hole, Bahamas (202 m deep). Mr. Fu, an excellent deep diver and an accomplished underwater photographer, has made many dives into the YBH.

Three months after the discovery, researchers from Ocean University of China (OUC), STO and other institutes were organized by Mr. Fu for a pilot scientific investigation. During this investigation, sampling equipment was tested and basic physical and chemical features of the YBH water column were examined in preparation for sampling plans in future investigations. Initial observations revealed that dissolved organic carbon (DOC) and dissolved inorganic carbon (DIC) showed extremely low and high concentrations, respectively. We were all surprised and excited to find DOC and DIC concentrations comparable to those typically found in radiocarbon-old deep-sea waters - 3 to 5 km in depth. This motivated us to focus on dissolved carbon in our next sampling, where we collected water layers, with greater resolution on radiocarbon and dissolved carbon analyses.


The second scientific investigation occurred onMarch, 2017, after the winter season of the South China Sea. Measurements of chemical and hydrologic properties in the YBH were conducted to explore dissolved carbon cycling within the system. Since the YBH is not a vertically-straight hole, an ROV was utilized to collect samples at depths below 200 m. A mini-laboratory was constructed on-site in the YBH, to allow for the analysis of pH, DO and H2S which require immediate analysis.

Water column stratification existed mostly within the depth range of 80 to 100 m, as reflected in physical and chemical gradients. Below 100 m depth, the YBH is characterized by both anoxic and sulfidic conditions. As expected, some of the lowest concentrations of DOC (e.g., 22 µM) and highest concentrations of DIC (e.g., 3,090 µM) in the hole in the deeper waters. Radiocarbon ages of dissolved carbon indicated that both DOC and DIC were unusually old (6,810 years BP and 8270 years BP, respectively), for oceanic waters not in the deep ocean. For example, the lowest reported oceanic DOC concentrations on the planet (~ 36 µM) are in the deep ocean (Hansell et al., 2009). Moreover, this DOC found in the deep ocean (e.g., >1,000 m) is commonly defined as recalcitrant DOC (RDOC) (Hansell, 2013) and recognized as a long-term microbial carbon sink in the global ocean (Jiao et al., 2010). The unusually low concentrations and old ages of DOC in the relatively shallow YBH has led us to consider a more short-term cycling for RDOC in oceanic waters. Based on H2S and microbial community composition profiles, we conclude that sharp redox gradients and a high abundance of sulfur cycling bacteria are likely responsible for much of the DOC consumption in YBH.

These results illustrate the unique features and accessibility of the YBH as a natural laboratory for examining in part, carbon cycling in marine anoxic systems. Expanding oxygen minimum zones (OMZs) and anthropogenically-induced coastal hypoxic systems further demonstrate the importance of easy access of a relatively nearshore low oxygen system that with waters akin to the deep ocean. While numerous other studies have been conducted in blue holes around the world, we posit that some of the deep ocean properties of the YBH provide the potential for understanding the “fast and slow” biogeochemical dynamics of coastal and deep ocean waters - particularly in the context of global change.

Finally, the deep dissolved carbon in the YBH, found to be thousands of years old, indicates that these relatively shallow waters have either not mixed with the open ocean for a very long time, or some other aging factor may be a work. However, we still do not know the residence time of water in the deep hole and do not know the role of carbonate dissolution from the walls of the hole in affecting DIC ages. There appears to no evidence of subterranean freshwater that could introduce old dissolved carbon into the bottom waters of the YBH. We remain eager to further explore what controls DOC cycling in this system and, the food and energy sources of microorganisms that affect DOC composition and the production and consumption of methane. There are many more hidden secrets waiting for others to discover in the YBH.

Peng Yao
Professor, Ocean University of China
Follow
I work in the area of organic biogeochemistry of aquatic systems, with particular emphasis in organic carbon cycling in rivers, estuaries and marginal seas.

Ruth Milne
over 2 years ago

This is so cool, thanks for sharing! 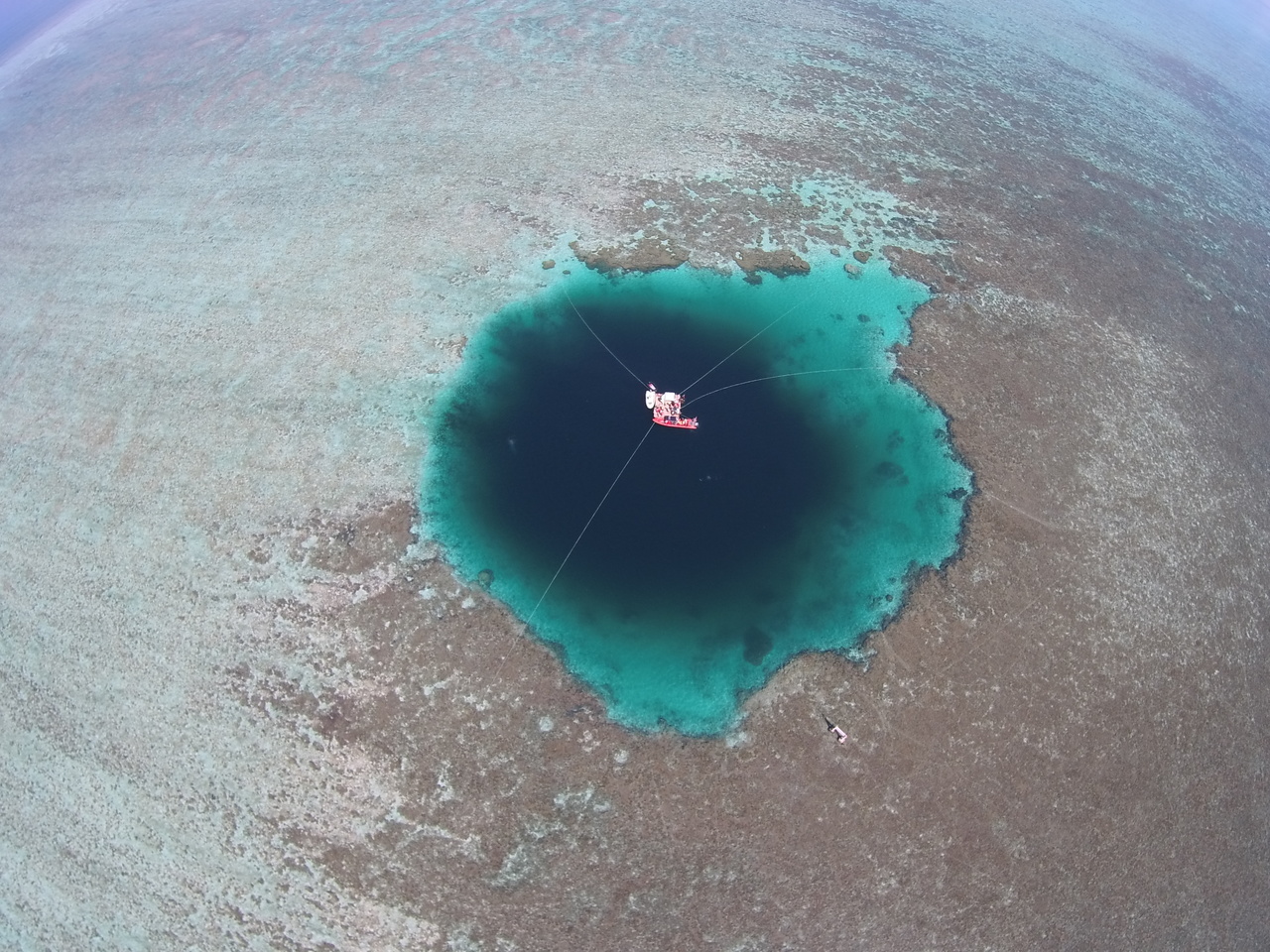