To slow down global warming, the world community has put forward the road to achieve carbon neutralization, which lay great emphasis on the use of renewable energy. Particularly, since our planet receives almost infinite energy from the sun every year, light energy has attracted considerable attention. For photosynthetic organisms, they can harvest light energy efficiently via light harvesting systems (LHSs). Hence, it would be meaningful if natural LHSs could be simulated via artificial systems. Frankly speaking, this is the primitive motivation to carried out this study. In the following part, I want to share my experience and thinking about the current research.

To simulate natural LHS, the first issue was to choose a suitable natural prototype for the newly designed artificial LHS. As classical prototypes, the LHSs of purple photosynthetic bacteria possess sequential energy transfer (SET), which show remarkably high overall energy transfer efficiencies (Φoverall ~ 95%).[1] However, most of artificial LHSs that mimic the prototype show Φoverall values less than 70% (see published paper for more examples).[2-4] For artificial systems, it is still challenging to perfectly mimic the functions of protein scaffolds in organizing bacteriochlorophyll (BChl) pigments via non-covalent binding[5] and promoting energy transfer via long-lasting quantum coherence[6]. On this account, we then paid attention to LHSs of green photosynthetic bacteria. Similar to higher plants, it contains hydrophobic cellular structures called chlorosomes. Direct supramolecular self-aggregation of BChl c pigments exists in chlorosomes without the aid of protein scaffolds.[7] Through cooperative self-assembly, densely packed nanostructures are generated with the involvement of 50000~250000 BChl c pigments.[8,9] Ascribing to high packing density and ordered packing mode of pigments, it efficiently collects light energy even under weak light intensity,[10] which transfer to reaction centers via SET.[11] Despite so many advantages, I feel puzzled that merely limited SET systems derived from BChl c have been reported.[12,13] The main cause probably lies in the fact that BChl c mimics have strong propensities to self-aggregate instead of co-assembling with other π-conjugated molecules.[14-16] Therefore, LHSs have been constructed via covalently attaching artificial antenna molecules to BChl c mimics.[12,13] It not only leads to the inevitably synthetic complexities, but also difficulties in the adjustment of donor/acceptor (D/A) ratios.

Considering that BChl c aggregates represent simpler yet efficient light harvesting antennae, we eventually decided to construct artificial LHS based on the natural prototype. As a PhD student major in supramolecular chemistry, I asked myself the second issue: whether green photosynthetic bacteria inspired SET system could be constructed purely via non-covalent strategy? To attain this objective, it is essential to seek for appropriate molecular basis. Fortunately, our group has developed a type of platinated (hetero)acene-based supramolecular monomers.[17-19] Similar to BChl c, they assemble into long-range-ordered helical aggregates via cooperative self-assembly (Figure 1). Intriguingly, by altering (hetero)acene units, spectral properties of supramolecular monomers can be regulated (Figure 1), which have potential to serve as D/A pairs. Accordingly, platinated (hetero)acene-based monomers are considered as suitable candidates. Once the molecular basis was decided, I encountered the third issue: how to determine (hetero)acene units of assembly monomers? With the aid of DFT/TDDFT calculations, spectral properties of supramolecular monomers possessing various (hetero)acenes were calculated. Through this method, I gained deeper insights into feasible combinations of D/A pairs. Of course, this method generally requires expensive computational cost while the results may sometimes less accurate. Recently, machine learning has been combined with DFT/TDDFT calculations to predict and study excitation energy transfer between D/A pairs in natural LHSs without the need of expensive computational costs.[6a,20] In the future, it maybe also a powerful tool for rational design of D/A pairs in artificial LHSs.

For photosynthetic organisms, light energy is transferred to reaction centers via SET and converted into chemical energy via photosynthesis processes. For artificial SET systems, they have been exploited to power photosynthesis in very limited studies.[2,21-23] In the final stage of this study, I attempted to combine the bioinspired SET system with chemical reactions. Since it primarily emits near infrared light from the final acceptor, it may be used to support near infrared light triggered polymerization.[24] However, the exploration was indeed unsuccessful. I think it is a pity for the study. 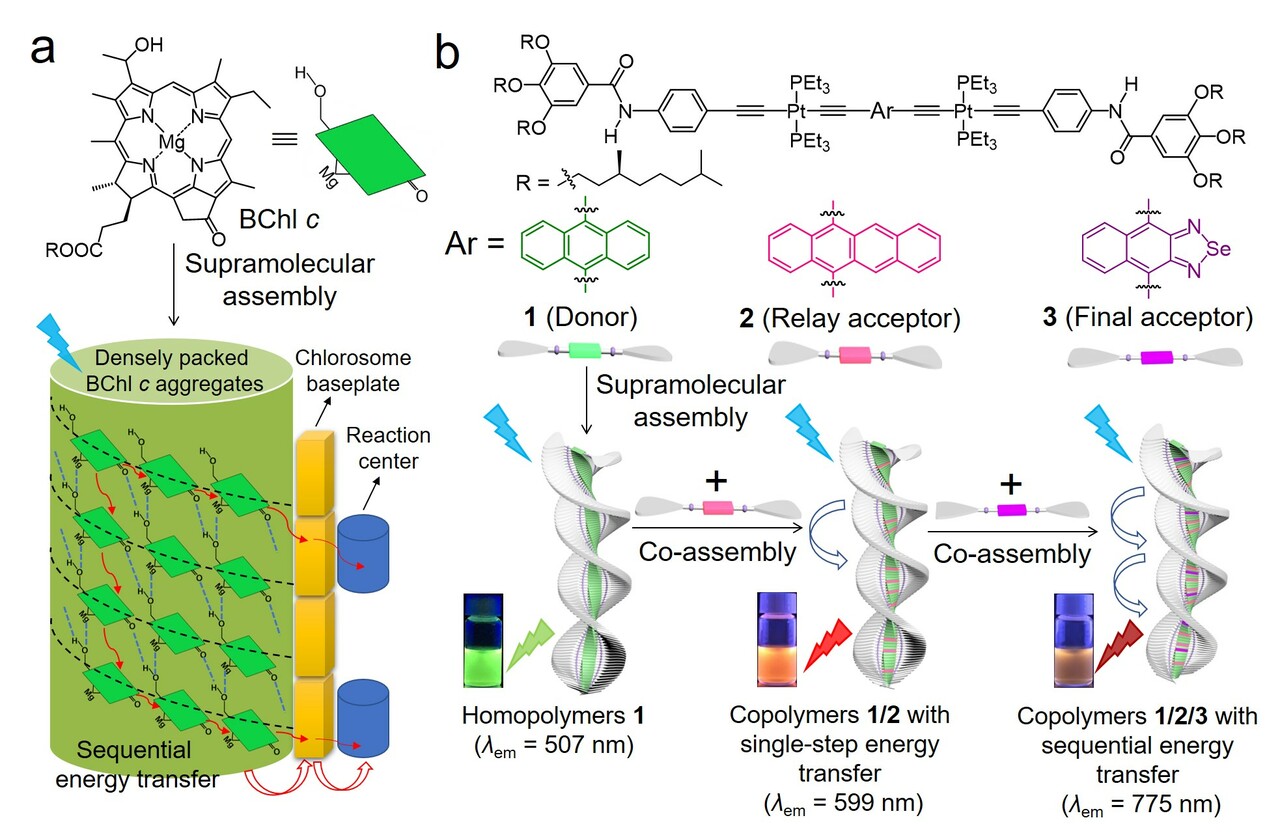