Whether we like it or not, herbicides are vital for modern, large-scale agriculture. The overuse of key herbicides has encouraged herbicide-resistant weeds to proliferate. This, coupled with decades of complacency in the research arena, means the hunt is on for new actives with new modes-of-action.
Josh Mylne and Joel Haywood
2 contributors
Like Liked by Evelina Satkevic and 3 others
0

There are hundreds of commercial herbicides (at last count about 360) classified into two dozen groups based on their mode-of-action, but weeds have become resistant to most of them. To make things worse, over the last 40 years, only one new mode-of-action herbicide has reached market. So it's not enough to find new herbicides; they have to be a new mode-of-action.

Our lab sought inspiration from a chemical library consisting of old, off-patent human drugs and we repeatedly hit statins (cholesterol-lowering medicines) as potent herbicides. This prompted us to investigate the protein target of statins by protein crystallography, hoping to enable us to develop plant-specific inhibitors that could be new mode-of-action herbicides.

The cholesterol-lowering compounds that came up time-and-again in the herbicidal screens were statins, natural products discovered in fungi and which quickly saw use in medicines.

Statins bind and inhibit the enzyme HMGR (3-hydroxy-3-methylglutaryl-coenzyme A reductase) which is an early step in the mevalonate pathway and leads to many products including the huge isoprenoid chemicals family. HMGR specifically reduces HMG-CoA to mevalonate using NAPDH.

The non-mevalonate pathway, also used in plants, is the target of the herbicides clomazone and bixlozone, but no herbicide specifically targets the mevalonate pathway or HMGR. To explore whether a plant-specific HMGR inhibitor was possible we solved the first structure of HMGR from a plant, namely the model plant Arabidopsis thaliana. Our crystal structures of HMGR showed the active site had an enlarged pocket. This enlarged pocket was not due to plant specific changes in the active site, rather it was due to an adjacent loop that in plants specifically appears more flexible and allows the active site in plants to be broader.

As important medicines, statins are unlikely to ever see field use as herbicides, but to demonstrate we could exploit this structural difference unique to and shared among plants, we modified atorvastatin and showed we could shift its specificity from the human enzyme to the plant enzyme. HMGR herbicides will need to be new scaffolds - an approach now possible with a plant structure made available.

An understated finding from our work is that we settle a long-held assumption; namely that statin-making fungi protect themselves with a modified HMGR.

The reason fungi produce statins is for self-defence. Statins tend to block most HMGR enzymes so in addition to modulating human HMGR, statins are anti-bacterial and of course anti-fungal. With statins largely studied in the 1980s and 1990s, research interest in them waned. The mechanism by which statin-producing fungi avoid killing themselves was never really pursued. Hutchinson et al. (2000) mention as 'unpublished data' putting the lvrA gene encoding a HMGR from the statin-making Aspergillus terreus into the lovastatin sensitive Aspergillus nidulans to confer strong resistance, but no-one ever actually got around to understanding the molecular basis of statin resistance.

With genomics becoming routine, a realisation came that when a fungus produces a natural product that would otherwise kill itself, its genome would have a pair of target genes, one usually within the cluster encoding genes for the lethal natural product. This cluster copy usually possesses a mutation or mutations that gives resistance to the encoded target protein. By following co-clustered self-resistance genes and natural-product biosynthesis genes, biologically active natural products and a resistant target protein are being discovered. A very relevant example is "Resistance-gene-directed discovery of a natural-product herbicide with a new mode of action" by Yan et al. (2018), which found a gene cluster producing the herbicidal aspterric acid as well as a modified dihydroxy-acid dehydratase that could tolerate it.

In our work, we sought statin clusters and examined their HMGR copies to find one that contains a leucine to threonine mutation within its active site. This is almost certainly the mutation this and other fungi need to survive their own statins. We made A. thaliana HMGR with the equivalent mutation (L558T) and found recombinant HMGR1-L558T protein continued to reduce HMG-CoA in the presence of statins. Transgenic plants expressing the same protein also grew well on statin-containing media.

Whether statins make it on their own as herbicides or not, in the future this mutation - favoured strongly by fungal evolution - might engender plant HMGRs with tolerance to alternative chemical scaffolds that inhibit the HMGR active site. 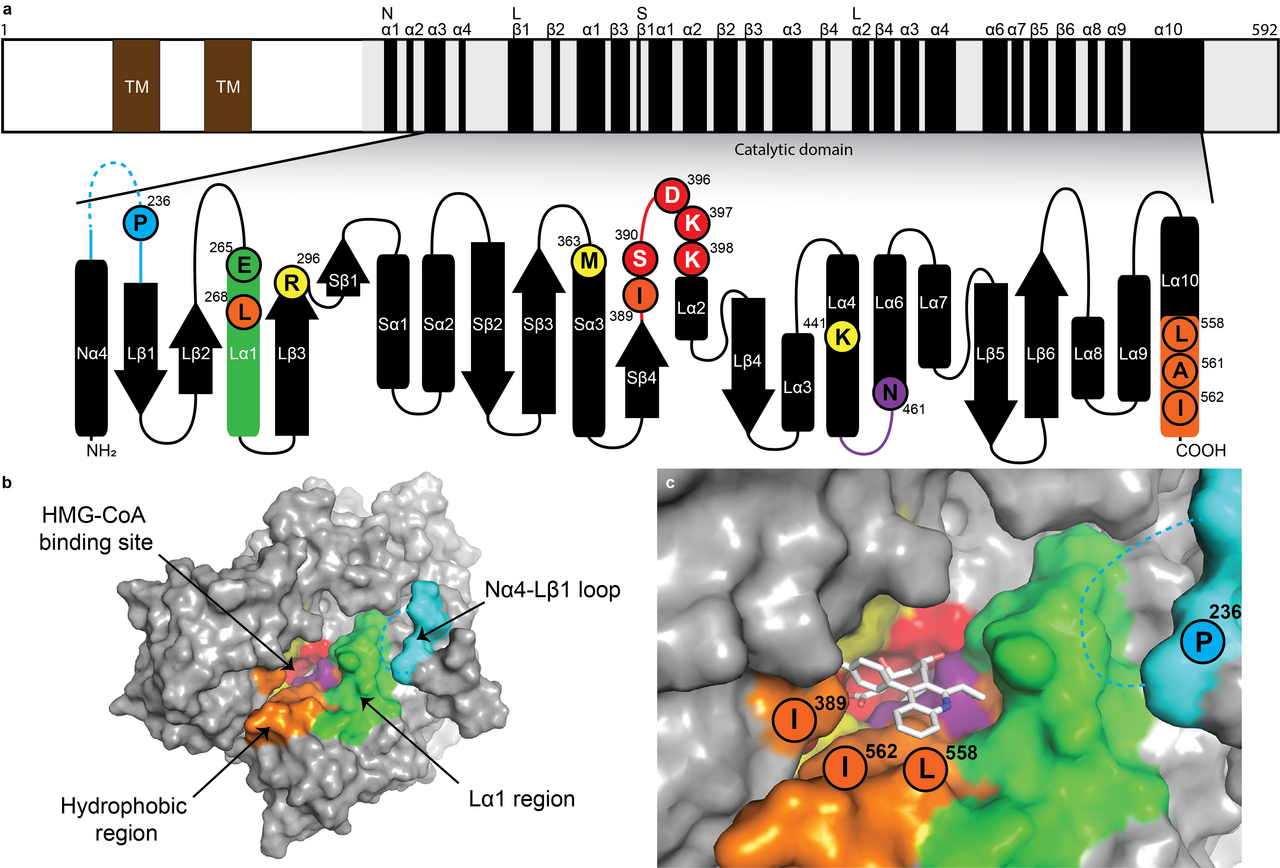 Whether we like it or not, herbicides are vital for modern, large-scale agriculture. The overuse of key herbicides has encouraged herbicide-resistant weeds to proliferate. This, coupled with decades of complacency in the research arena, means the hunt is on for new actives with new modes-of-action.