Protein filaments are common in biological systems and perform critical cellular roles. However, the lability of helical symmetry presents a challenge to the design of synthetic filaments. Here, we report a cryo-EM analysis of cross-alpha filaments that provides insight into peptide designability.

In scientific research, the question often arises about the appropriate time to cut bait on an ongoing project, that is, to abandon a line of research that has no apparent productive path forward. Such decisions can be difficult to render due to personal investments of time and resources, in conjunction with an intellectual attachment to a particular line of inquiry. This manuscript resulted from one such study, in which we decided to perform one final experiment to finish off a project that we thought played out. This experiment turned out to be the classical “one too many”, which yielded unanticipated results that immediately suggested further analysis. The results of this analysis provided new insights into the quaternary structure of peptide filaments, in particular, the mechanism whereby changes in peptide sequence can be accommodated through the structural plasticity of interfaces.1

The origin of this project dates back to approximately 2012 when Dr. Chunfu Xu, a former graduate student in my lab, had undertaken the structural analysis of a class of synthetic coiled-coil peptides that we had designed to self-assemble into helical filaments. Fortunately, after we initiated this project, developments in cryo-EM structural analysis made it possible to determine the structures of peptide filaments at near-atomic resolution. In conjunction with Prof. Liz Wright (University of Wisconsin) and Prof. Ed Egelman (University of Virginia), cryo-EM was employed to screen the filaments and analyze the structures.2 The structures of filaments derived from two closely related peptide sequences, Form I and Form II, differed not only from each other, but also from the conceptual model, first proposed by Prof. Dek Woolfson and co-workers (University of Bristol),3 that was employed as the basis for the peptide design. The Form I peptide filament displayed an unusual interaction in which four protofilaments associated laterally through an interaction of a pair of appropriately spaced arginine residues (arginine clasp) with the C-terminus of a helix on an adjacent protofilament. Mutagenesis of either arginine residue to lysine resulted in conversion of the Form I structure to the Form II structure. This conversion demonstrated the sensitivity of quaternary interfaces in peptide assemblies to semi-conservative amino acid substitutions. This structural plasticity has significant implications for the design of synthetic peptide assemblies. These results were published in the journal Structure in 2015.4

Shortly thereafter, Charlie Modlin, a new graduate student, joined my lab and followed up the initial investigation. We thought that we might use the position of the arginine clasp motif and the length of the peptide to control the diameter of the filament, since the helices defined the periphery of the assembly. Using conventional TEM and SAXS analysis, Charlie was able to demonstrate that an incrementally longer peptide did in fact form slightly wider filaments, although it was not possible to extend the peptide length beyond a single repeat unit and preserve its self-assembly behavior. Charlie was soon diverted to more promising projects and his results languished until he was finishing up his graduate work. At that point, we thought to complete the analysis and publish the results, even though they didn’t represent a particularly profound or compelling insight. At this point, Ed Egelman and Dr. Fengbin (Jerry) Wang, a postdoc in the Egelman lab, once again came to our assistance. Jerry solved the structure of the corresponding peptide assembly (36-31-3) using cryo-EM analysis. We had anticipated that the structural analysis would demonstrate that the corresponding assembly would have the same structure as the original Form I filament. Instead, we observed that the structure displayed a different helical symmetry in which three protofilaments interacted within the assembly. However, despite the difference in structure between the two peptide filaments, the interfaces between peptide subunits were largely conserved. The two different peptides could accommodate the change in length while maintaining the critical interfacial interactions.

The result of this “one final experiment” led us to postulate whether the structure of the assembly could be controlled through peptide length. Timing is everything, and, as luck would have it, Charlie had departed from my research lab after successfully defending his thesis. Ordy Gnewou, a new graduate student, had just joined my research group and walked right through the door into this project, which now had a clear path forward. Ordy prepared and characterized a series of peptides having different lengths, but maintaining the arginine clasp motif. In conjunction with Jerry and Ed, we were able to demonstrate that peptide length does control the structure of nanotube assembly. As the peptide length increased from two to five repeat units, the number of protofilaments within the respective assemblies decreased from five to four to three (Figure 1). The local packing interfaces between peptides within the assemblies were altered in order to maintain the structurally critical arginine clasp interaction between protofilaments. The associated structural changes would have been nearly impossible to predict from first principles and the cryo-EM structural analysis was critical to develop an understanding of the mechanism of self-assembly of the cross a-helical filaments.

The structural conservation of the unusual arginine clasp interaction within these assemblies led us to question whether this motif was employed in native protein structures to mediate similar helix-helix interactions. Working with Prof. Gevorg Grigoryan (Dartmouth College), the arginine clasp motif was employed to query structures within the Protein Data Bank (PDB). Despite its robustness within the structures of these filaments, the arginine clasp motif is not found to mediate similar helix-helix interactions within native protein structures, which were observed to be relatively rare regardless. This observation raises an open questions about the role of short interaction motifs in encoding structural specificity within filamentous protein assemblies. Given that these assemblies are ubiquitous in biological systems and frequently employed as synthetic biomaterials, a detailed understanding of these interfacial interactions will be critical to control supramolecular structural parameters (e.g., aspect-ratio, persistence length, and contour length) that significantly influence the properties of materials.

These results provide an insight into the twisted path of scientific discovery. The initial Form I peptide was designed as a sequence control that, fortuitously, led to an interesting insight into peptide self-assembly. Unfortunately, the initial results did not suggest a path forward for the project, although the assemblies found practical application by other researchers.5,6 The project lay moribund in my lab until revived by one “final” experiment, which opened up a new line of research. To paraphrase Branch Rickey, who popularized the quote: “Luck is the residue of (peptide) design.”  However, without the eyes of cryo-EM analysis, we would still be swinging in the dark. 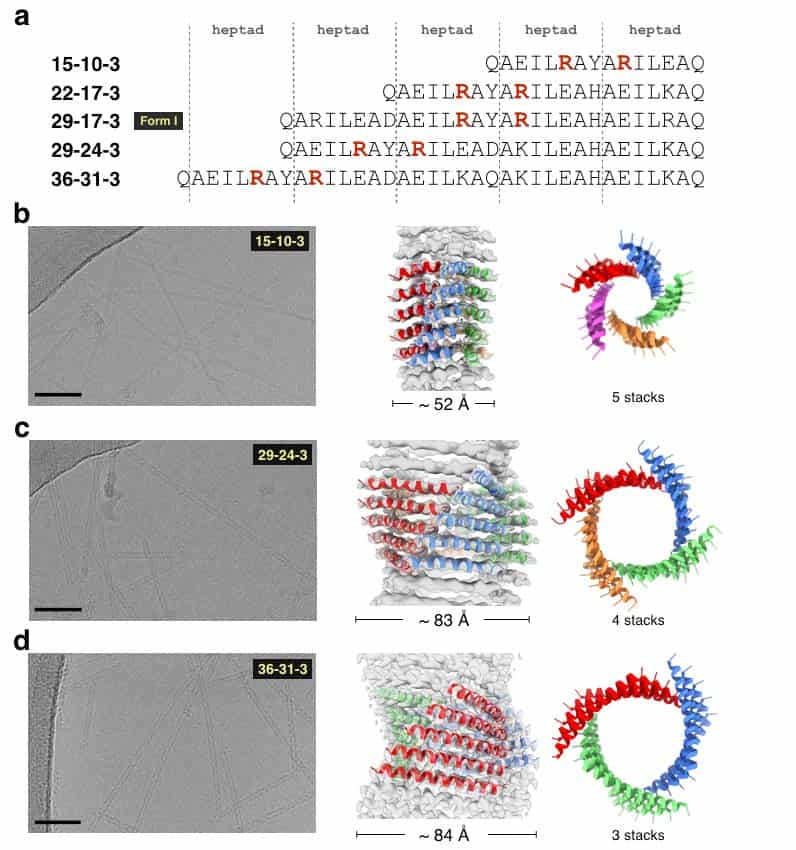 Fig. 1 Cryo-EM of arginine clasp peptide filaments based on Form I. a Sequences of the Form I peptide and four designed peptides derived from Form I. b-d Cryo-EM of peptide 15-10-3, 29-24-3, and 36-31-3. Representative raw micrographs are shown on the left (scale bar 500 Å). The cryo-EM reconstructions are shown in the middle, with models fitted into the maps. The top views of the atomic models are shown on the right. 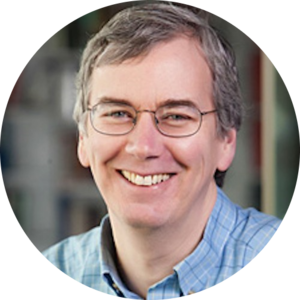