Here we show a host–guest approach to direct couple abiotic and biotic catalysts via a NADH–containing host, which is quite promising compared to normal catalyst–enzyme systems for it offers the key advantages of supramolecular catalysis in integrated chemical and biological synthetic sequences.

Host–guest catalytic strategy inspired by enzymes to combine enzymatic and artificial catalysis is an important tool to copy the natural prototypes of enzymatic processes. Despite that significant advances have been made in the integration of individual redox enzymes with artificial catalyst to drive a litany of complex organic transformations efficiently, the combination of abiotic and biotic catalysts is often difficult to be fulfilled since there are many doubts including the ability of artificial catalyst, the compatibility between synthetic complexes and natural enzymes, and fine matching of each catalytic cycle. What’s more, to reproduce a sustainable system, the avoid of stoichiometric amounts of cofactors is indispensable for an efficient tandem system.

Note that the overall reaction kinetics of enzyme is seriously affected by diffusion of cofactors, such as NADH (reduced nicotinamide adenine nucleotide). So that we considered that the installation of active sites of cofactors into the backbone of metal–organic capsules would be a distinguished choice for the development of catalyst–enzyme coupled system. Thus, a new NADH analogue modified metal–organic capsule was designed and prepared to work with natural enzymes for a unique supramolecular approach to adjusting the communication way between artificial and enzymatic catalysis. As shown in the figure below, by encapsulating a flavin analogue and a substrate into the pocket of capsule, an artificial FAD–dependent oxidase was reproduced. And the coupling artificial and enzymatic catalysis with the pocket of an enzyme allows direct transfer protons and electrons between two catalytic cycles via NADH mimics, giving a closed loop of electrons and protons. This new catalyst–enzyme coupled system prevents the mutual interference and eliminates the effect of cofactor diffusion and simplifies the multisubstrate process into a single substrate process. The fine synergy of the reactions by virtue of such a host–guest approach contributes to a high yield and selectivity extendable to monooxygenation of thioethers and cyclobutanones, suggesting that the incorporating of supramolecular catalytic systems with a NADH–containing capsule into an enzyme domain is quite promising to integrate the chemical and biological synthetic sequences.

In this study, we represent the first example to construct orderly catalyst–enzyme coupled system by cofactor modified capsules for fully controlling the chemical outcome without overoxidation. The artful design to modify cofactors as media on the surface of capsules and the catalytic coupling with the pocket of enzyme not only maintained the traditional superiority of the confined effects in supramolecular system, but also enhanced the protons and electrons transfer between enzymatic and artificial catalysis through the cofactor channel, separating the redox events spatially and providing a new catalytic platform for scalable and sustainable biocatalysis. 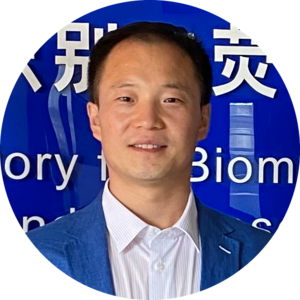 Liang Zhao received his bachelor degree from Dalian University of Technology. He continued on to graduate studies in Professor Chunying Duan’s group for studying the controllable construction of metal-organic supermolecular systems and their photochemical properties. He obtained his PhD in Inorganic Chemistry in 2014 and then he began his faculty appointment as an associate professor in the State Key Laboratory of Fine Chemicals at the Dalian University of Technology. His research interests include coordination chemistry, supramolecular chemistry, photocatalysis, as well as enzyme mimics catalysis.
Follow