The chromophore binding pocket has a pivotal role on the chromophore dynamics even beyond the initial photoisomerization process. In particular, we find a strong indication that the protein can guide the further evolution of the system towards the correct final state.
Giacomo Salvadori
PhD Student, University of Pisa
Follow
Like Be the first to like this
0

Phytochromes are photoreceptors responsible for sensing light in plants, fungi and bacteria. Here the authors use computational simulations to reveal the molecular mechanism of photoactivation and characterize the involved reaction intermediates.

Life on Earth depends on the ability to convert light into chemical energy for cellular processes. Thanks to a collection of protein complexes called photoreceptors, each tuned to a specific wavelength through a small molecule (the chromophore), organisms perceive and adapt to multiple environmental stimuli. Among the best studied of these sensors are the phytochromes, biological machines that mainly monitor red and far-red light controlling the growth, reproduction and movement in plants, fungi, and bacteria.

Phytochromes sense light using a linear tetrapyrrole (bilin) chromophore that is covalently attached to a multidomain apoprotein via a conserved cysteine residue. The apoprotein is composed of a photosensory module (PSM) that transfers the light signal to the output module, which promotes dimerization and might relay the light signal.
Bacterial phytochromes are particularly interesting because they have a relatively simple modular architecture. Among them, the one from Deinococcus radiodurans (DrBph) is a widely employed model system. It utilizes biliverdin, a breakdown product of heme which is ubiquitous in mammalian tissues, as a chromophore. Among all linear tetrapyrroles, biliverdin possesses the largest electron-conjugated chromophore system. Therefore, bacterial phytochromes absorb and fluoresce at the red edge of the visible spectrum, within the tissue transparent window. These spectral properties, together with the photoactivation properties and structural modularity, make bacterial phytochromes an ideal candidate for the design of photoactivatable fluorescent proteins and optogenetic tools.

Despite decades of studies, a comprehensive understanding of the photoactivation mechanism of phytochromes is still far from being achieved.  Their photocycle has been studied extensively with spectroscopy. In response to red light, the chromophore is electronically excited and photoisomerizes at a double bond (Figure 1). Afterwards, the chromophore structural change propagates first to the binding pocket, and then to the entire protein triggering large conformational changes, and finally its biological activity. However, spectroscopic techniques are limited in the atomistic details of each step in the activation pathway. In fact, the structural details of the intermediates along the inactive-to-active transition are largely unresolved. A lot of questions remain unanswered: what happens to the chromophore just after light absorption? How does the environment affect the entire activation process? Is it the chromophore that acts on neighboring residues or is it the environment that drives the evolution of the system? How does the change in chromophore structure propagate further to the entire protein? To go beyond the current knowledge and finally reach an atomistic view of bacterial phytochrome photoactivation, we combined a range of different computational techniques, able to simulate the movement of atoms from the initial photochemistry down to the subsequent slower relaxation processes. To simulate the photochemistry (in the ps timescale), we used the Surface Hopping method, which allows for describing the coupled motion of nuclei and electrons that occurs in the excited state of the chromophore. We used this method to simulate the excited-state processes and the decay to the ground state. In a second step, we simulated the subsequent slower dynamics with classical molecular dynamics, a tool that allowed us to reach a timescale up to microseconds.

The excited-state simulation revealed how the chromophore atoms move just after light absorption: the compact structure of the protein pocket forces a ring at the end of the chromophore to rotate counterclockwise (Figure 1A), while the double bond connecting the ring to the rest of the molecule rotates in the opposite direction. This motion, known in the literature as hula-twist, allows isomerization around the double bond without drastic changes in the three-dimensional structure. We also found that the rate of excited-state photochemistry is controlled by hydrogen bonds that the polar C=OD group of the biliverdin ring can make with the protein.

At the end of the photochemistry simulations, we obtained the structure of a first intermediate, that in the literature is indicated as "early" Lumi-R. But how can we know that our model corresponds to the experimental evidence? To connect our results with the spectroscopy experiments, we simulated the differences in infrared spectra between the early intermediate and the initial (Pr) state. These spectral features could be directly compared to the ultrafast spectra measured a few nanoseconds after exciting the phytochrome, confirming our atomistic insight.
Following the further evolution of the phytochrome up to one microsecond, we could "see" how the protein activation is set in motion. As new changes occur in the protein pocket (Figure 1C), we could say that the system does evolve towards a second intermediate, the "late" Lumi-R. This intermediate shows an increased heterogeneity, with enhanced mobility of the amino acids that compose the protein pocket. The most striking change, however, was a partial breaking of the strong salt bridge Arg466⋅⋅⋅Asp207 that keeps together different domains of the protein. Indeed, we know that this salt bridge is broken to reach the active (Pfr) state, but until now the "how" and "when" were completely unknown. 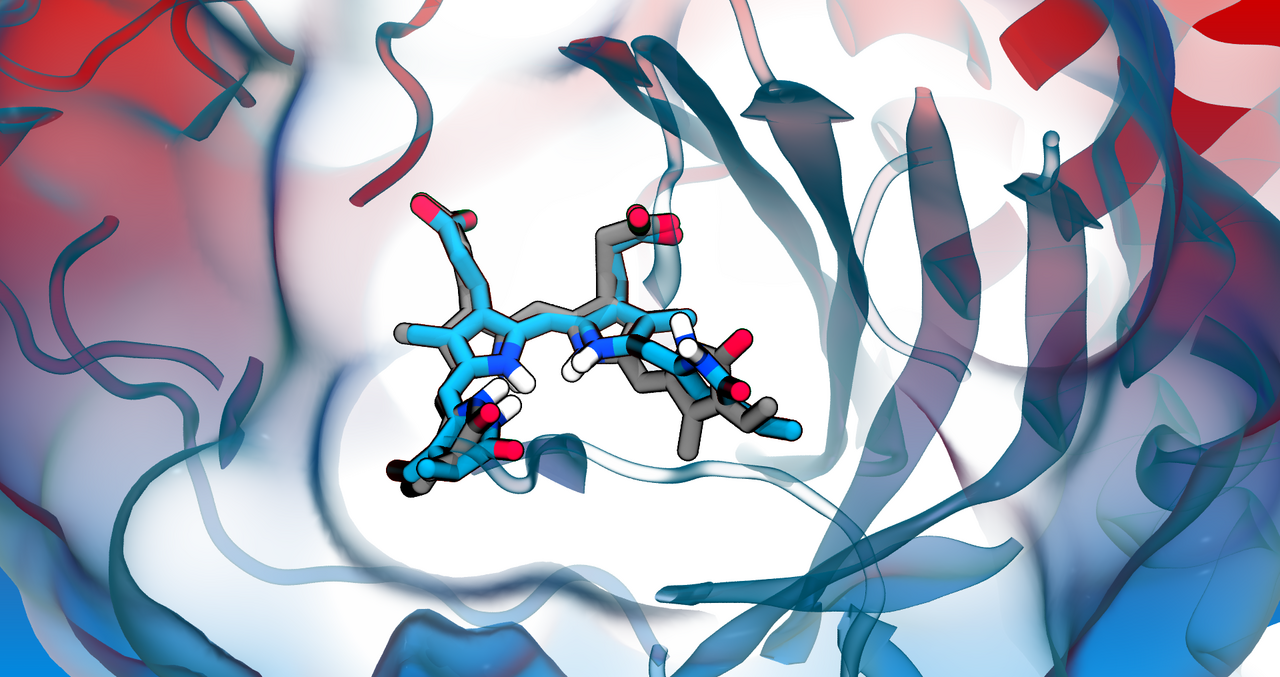 The chromophore binding pocket has a pivotal role on the chromophore dynamics even beyond the initial photoisomerization process. In particular, we find a strong indication that the protein can guide the further evolution of the system towards the correct final state.