We report porous organic cages as a new type of synthetic water channels, which can effectively reject ions while allowing fast water permeation on the same magnitude as that of aquaporins. In addition, those cages do not have the alignment issue, making them attractive in desalination.
Dan Zhao, Yi Di Yuan & Dan Zhao
3 contributors
Like Liked by Gao Jianguo and 1 other

Replicating the performance of protein water channels (aquaporins) in artificial one-dimensional channels are often synthetically challenging. Here, the authors show that porous organic cages allow water permeation on the same magnitude as that of aquaporins while effectively rejecting small ions.

In Singapore where we are based, up to 70% of water consumption is currently supplied by membrane-based water reclamation (which we call NEWater) and seawater desalination. This number is expected to hit 85% in 2060 with population growth and rapidly developing industries. However, we are not alone. Many regions in the world are currently or on the road to water stress and scarcity. Water desalination is the current answer to increase freshwater resources, taking from the used water and the vast seas1. Therefore, intensive studies are ongoing to further improve the efficiency and throughput of these desalination processes.

Recently, a class of protein water channels called aquaporin has been highlighted to create ultrapermeable desalination membranes, benefitting from their high water permeability and complete ion rejection2,3. Aquaporin has inspired multiple synthetic analogs to mimic its performance with added robustness and ease of scaling-up for industrial applications4. The traditional synthetic water channels, such as carbon nanotubes, are one-dimensional (1D) channels with water-permeating centre pore accessed by two openings at the tube ends. This morphology signifies the need for perfectly perpendicular alignment within membranes to ensure full access of water molecules to the pore openings, which can be quite challenging during practical applications.

We attempt to circumvent this problem with a zero-dimensional (0D) material called porous organic cages (POCs). POCs is a class of fully organic discrete polyhedral molecules containing a centre cavity accessed by multiple pore windows. Guest molecules can enter each cage molecule via either of the pore windows, thereby reducing the dependency of channel performance on its orientation. These cages can self-assemble into aggregates with internal and external porosities that contribute to a three-dimensional (3D) interconnected pore networks5,6.

We incorporated the cages into the bilayer of liposomes to study their water and salt permeabilities. The hydrophobic interaction of the cages with lipids safely locked them within the hydrophobic lipid bilayer. However, to understand the arrangement of cages inside the lipid bilayer is not as straightforward as the other 1D channels. Combining indirect evidences using cryogenic transmission electron microscopy, atomic force microscopy, confocal microscopy, spectrofluorometry, as well as control experiments with nonporous cages, we were able to infer that the cages self-assembled into transmembrane nanoaggregates containing interconnected pore networks.

The presence of cages in lipid bilayer resulted in faster water permeations. In this respect, the cage pores offer highways with less resistance compared to lipid bilayer. In addition, water arrangement in the cages was observed experimentally using neutron powder diffraction. Water molecules were confined within the internal and external cavities of the cages in a regular pattern and they formed a 3D water network within the cage crystals. Higher water occupancy was observed in the cages with more hydrophilic structure. Aside from hydrophilicity, water permeability of the cages is strongly affected by their pore size, connectivity, as well as structural rigidity.

In an effort to understand the permeation phenomenon, we modelled the cage nanoaggregates in lipid bilayer using molecular dynamic simulation. In an osmotically-driven seawater desalination model, single-file, branched waterwires were formed inside the transmembrane cage nanoaggregates embedded in lipid bilayer. Through tracking the binding energy profiles of single water molecule, we found that smaller channel and hydrogen bonding between the cages and water molecules reduced water permeation. On the other hand, negligible salt permeation was observed for all the cages of this study in both experiment and simulation, which may be due to size-exclusion of hydrated ions and high energy penalty of ion dehydration in a highly hydrophobic environment. 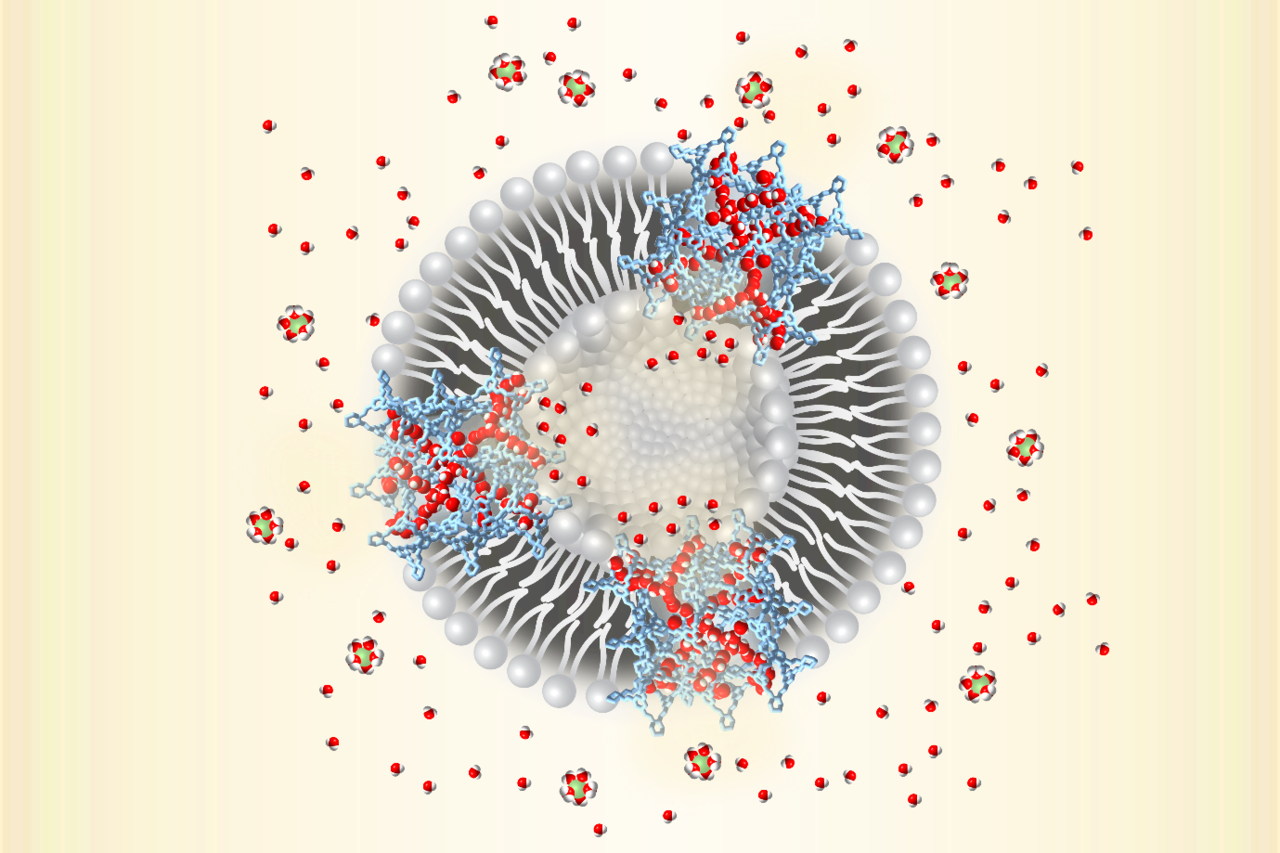 We report porous organic cages as a new type of synthetic water channels, which can effectively reject ions while allowing fast water permeation on the same magnitude as that of aquaporins. In addition, those cages do not have the alignment issue, making them attractive in desalination.