A photochemical way to pure ethylene

We report a new, photochemical system for the reduction of acetylene to ethylene. The system works under visible light and uses water as proton source. We propose photoredox chemistry as a viable and sustainable route to industrial thermocatalytic hydrogeneration to produce polymer-grade ethylene.
Luka Đorđević
Post-doctoral research associate, Northwestern University
Follow
Liked by Wenrui Chen and 2 others

The acetylene contaminant present in ethylene feeds used to produce polymers is typically removed by thermal hydrogenation. Now, it has been shown that the conversion of acetylene to ethylene at room temperature can be achieved in a visible-light-driven process using an earth-abundant metal (cobalt)…

Ethylene, starting material to tens of millions of metric tons of polyethylene, usually contains trace amounts of acetylene that needs to be removed because it poisons the polymerization catalysts. Typically, industry accomplishes this task by thermally hydrogenating acetylene, which requires a high temperature, an external feed of H2 gas, and noble metal catalysts; it is not only expensive and energy-intensive but also prone to overhydrogenation, forming unwanted ethane and generating dangerous amounts of heat.[1,2] In our paper, we report a photocatalytic system that can reduce acetylene selectively, even when present in an ethylene-rich gas feed. The system uses a cobalt porphyrin catalyst that is powered by light and employs water as proton source in the reduction of acetylene (Figure 1). This was a close collaboration with Dr. Francesca Arcudi, Prof. Emily Weiss and Prof. Sam Stupp at Northwestern University, and part of the Center for Bio-Inspired Energy Science (CBES), an Energy Frontier Research Center funded by the US Department of Energy, Office of Science, Basic Energy Sciences.

Early last year, as we were finishing experiments for another collaborative effort – carbon dioxide photoreduction using cobalt porphyrins and quantum dots[3] – we realized that the photogeneration of cobalt(I) reactive species could be useful for a variety of reactions. Although this realization came to numerous groups before us,[4] we were especially inspired by a 1972 report in which a cobalt porphyrin was found to reduce acetylene to ethylene, in presence of chemical reductants such as sodium borohydride.[5] However using an excess of chemical reductant has two side effects: overhydrogenation to ethane (although there was a tenfold selectivity for ethylene over ethane) and lots of H2 released (inevitable when using sodium borohydride in water). At this point we thought that by using photoredox chemistry we could avoid ethane and hydrogen production. Thanks to our previous work in metallaphotoredox catalysis and to the REACT core facility (Prof. Neil Schweitzer; that had a 5 vol.% acetylene cylinder, employed for thermochemical reductions, and a GC-MS for C2+ products we could use) it took us little time to ‘just try’ the photoreduction reaction. Already at first injections we observed conversion of acetylene to ethylene and little or no production of ethane (Figure 2)!

Having the first experiment work out as planned (something very uncommon, at least to me) was very exciting and set in motion all the work (and some sleepless nights running kinetics) that finally resulted in the publication of our system. Some moments to highlight were running all the controls to prove unambiguously that it is a photocatalytic process, performing deuteration experiments, employing an organic semiconductor instead of ruthenium complex, and selectively reducing acetylene in an excess of ethylene. But I won't bore you with the details, those can be found in the paper.

At the early stages of the project, we also started to realize the potential of a photochemical system to selectively reduce acetylene as alternative to traditional ethylene purification routes. Gladly, our system selectively reduces acetylene even in presence of an excess of ethylene (the industrially relevant condition). In the future there will better routes towards producing ethylene (for example by reducing CO2),[6] but polyethylene is here to stay until better (i.e. fully recyclable) plastics are available, and we believe that reducing the energy footprint for ethylene purification, by either photochemical or photoelectrochemical processes, is a great first step towards sustainability. Perhaps in the future we will be able to merge our CO2 photoreduction work with ethylene purification...

How to introduce fluorine in polyketide natural compounds 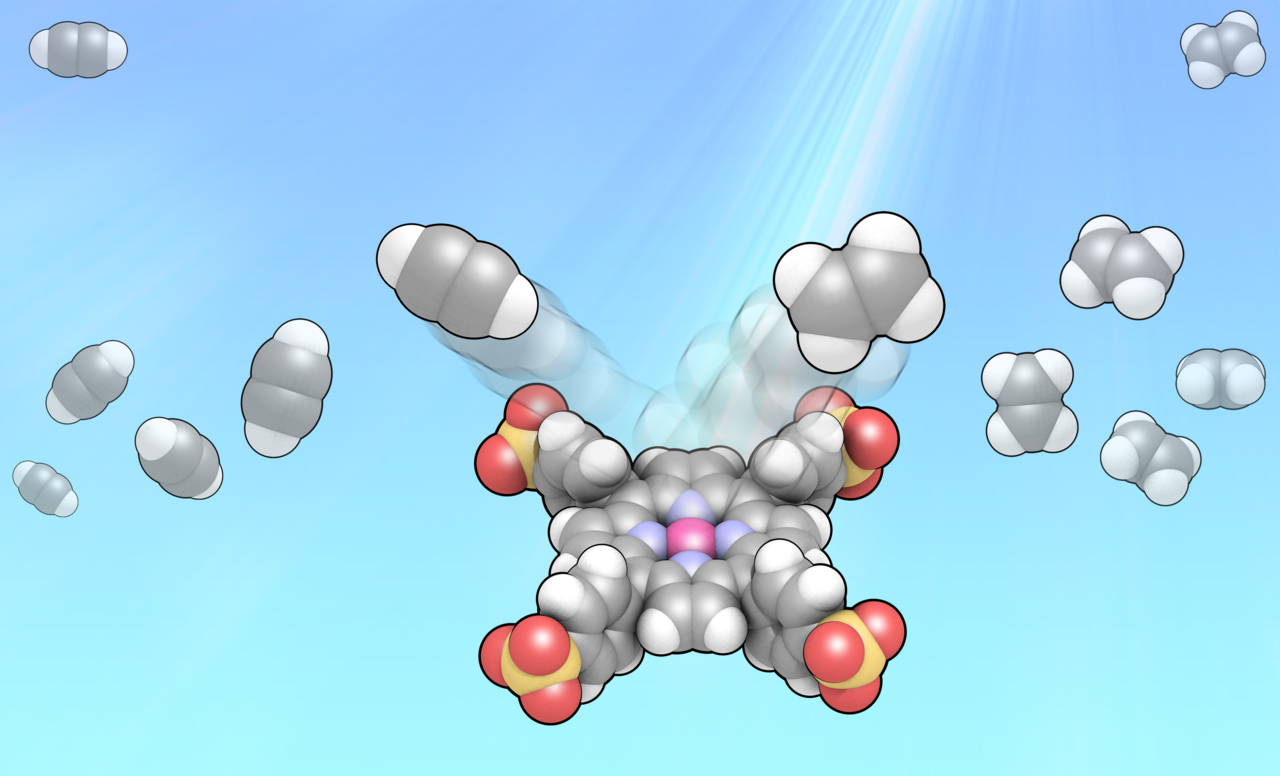 A photochemical way to pure ethylene

We report a new, photochemical system for the reduction of acetylene to ethylene. The system works under visible light and uses water as proton source. We propose photoredox chemistry as a viable and sustainable route to industrial thermocatalytic hydrogeneration to produce polymer-grade ethylene.