One of the major challenges in biology is to understand what three-dimensional shape a specific amino acid chain collapses into. Notably, Google-owned AlphaFold have made huge strides in using artificial intelligence to predict protein structures accurately and rapidly, obtaining ones that are virtually indistinguishable from those solved by traditional, comparatively laborious structural biology methods. While an increasing proportion of the proteome is being structurally characterised, the sequential manner by which protein structure is made (i.e. the pathway of protein folding in vivo) is a relatively poorly understood process. A mechanistic understanding of folding, and how disease mutations affect it, is not only fundamental but important to defining future intervention strategies.

Our understanding of protein folding has historically been shaped by the wealth of studies which subject natively folded proteins to denaturing conditions, to then either watch them unfold or refold upon removal of denaturant. But in the cell, proteins are universally synthesised on the ribosome and emerge from the exit tunnel into the cytosol. Because the nascent polypeptide is synthesized relatively slowly compared to the rapid process of folding, it can already begin to fold without its complete amino acid sequence. 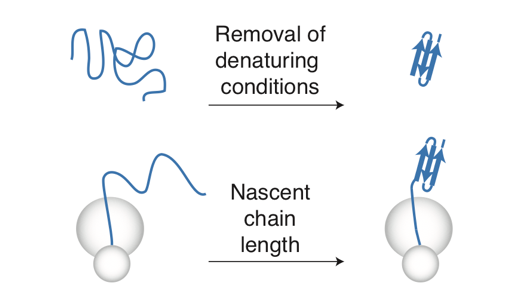 One of the emerging frontiers in understanding protein folding includes the study of how the elements within the cellular milieu shape hydrophobic collapse. By studying proteins as they are being synthesised by their parent ribosome, we are obtaining insights into the earliest contacts made in a disordered, fledgling chain. The strategy described involves the production of snapshots of this process, by isolating complexes of the nascent chain with its parent ribosome at discrete points during protein translation. The resulting series of ribosome-nascent chain complexes (RNCs), harbouring increasing lengths of the translated protein sequence, are then subjected to analysis, chiefly via NMR spectroscopy. With nascent polypeptides being highly dynamic, NMR is the technique of choice for their structural analysis.

In this study, (doi: 10.1038/s41557-021-00796-x.  https://www.nature.com/articles/s41557-021-00796-x) we systematically study how the presence of the ribosome influences folding of a model immunoglobulin-like domain, FLN5. We found and subsequently characterized a series of interaction sites between nascent FLN5 and the ribosome surface. We find, from NMR experiments which exploit a large relaxation transfer from the ribosome to the nascent chain upon transient contacts, that most interactions are weak. These are likely mediated in large part by the large effective concentration of the ribosome ‘felt’ by the nascent chain in such close proximity at the exit tunnel. 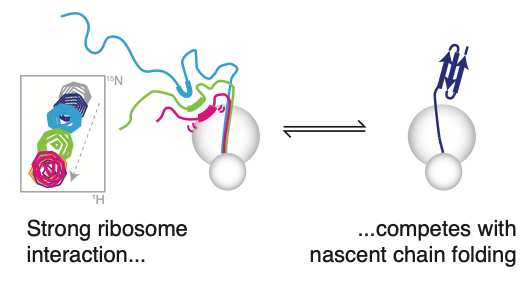 In contrast to these transient nascent chain-ribosome interactions, we also detect a specific and substantial binding event between the C-terminal segment of the nascent immunoglobulin-like domain and the ribosome surface, seen from a series of chemical shift perturbations in our NMR spectra. At early stages of biosynthesis, where the C-terminal segment of FLN5 is located close to the ribosome surface, we demonstrate that a large proportion (60-90%) of the nascent chain population is ribosome-bound. We then show that the effect of this is to make the unfolded protein unavailable for folding, essentially delaying the collapse of the chain until it is elongated further during translation, at which point native folding is then able to compete with these interactions.

The sequestering of this crucial C-terminal segment, without which the immunoglobulin domain cannot fold natively, appears to be one of many possible strategies by which the ribosome regulates folding. Indeed, we speculate that in the context of a multidomain protein, such as the one of which FLN5 forms a part, delaying folding could minimize the hazard of interdomain misfolding events and their potentially devastating consequences. Furthermore, if the ribosome stabilises specific, non-native structures, then those structures represent the earliest, targetable point during biosynthesis at which drugs could interfere with structure formation. These are some of the reasons why studying the formation of structure experimentally will keep yielding additional insights into the intimate links between translation, protein folding, protein structure and disease and unlock novel strategies for therapeutic intervention.