A very simple mutation of the nucleophilic residue of a catalytic triad of an acyl transferase has dramatically expanded its synthetic scope, enabling the use of the mutant variant in the preparation of thioesters and tertiary amides
Francesca Paradisi
Professor of Pharmaceutical and Bioorganic Chemistry, University of Bern
Follow
Like Be the first to like this
0

Preparative methods for thioester and tertiary amide formation are currently missing in the biocatalysis repertoire. Now, a mutation of serine to cysteine in the catalytic triad of an acyltransferase expands its synthetic capability to generate these compounds while retaining its natural activity to…

Any textbook on enzymes will report on how catalytic residues in any given enzyme family are highly conserved, they are in fact a signature of the type of chemistry an enzyme can do and are often used as a fingerprint in genome mining to identify a putative novel enzyme belonging to a specific category. Of course, variations do occur, in some cases the substitutions are very conserved and common (you can easily find a glutamate instead of an aspartate in catalytic triads of hydrolytic enzymes), but others are very rare and usually found only in a limited number of species.

When we want to change the substrate scope of an enzyme, our approach has generally been to mutate the residues involved in substrate binding, whether through rational design or directed evolution, leaving always untouched the catalytic ones.

In 2018 we started working on an acyl transferase from Mycobacterium smegmatis (MsAcT)that had been previously reported to have an excellent activity towards alcohols in the synthesis of esters in water.1 We showed that its substrate scope was in fact broader than that and the enzyme worked also with a range of primary amines which we used in the synthesis of amides (both in batch and under flow conditions).2,3 When we tried thiols as nucleophiles however, the enzyme showed no activity at all.

Thiols are good nucleophiles also, but we thought that the acyl enzyme intermediate, where the catalytic serine is now bound to the acyl group via an ester bond is not sufficiently reactive for a soft nucleophile such as a thiol. MsAcT possesses an evolutionary well conserved catalytic triad (Ser-His-Asp) and looking deeper into it we found that in fact >99% of the sequences of the enzymes in the same family contains the Ser-His pair, while some tolerance is observed at the Asp position. It would seem that for catalysis the Ser-His are indeed untouchable. Or are they?

We thought that maybe we could destabilise the acyl enzyme intermediate if instead of an O-Acyl group we could generate a S-acyl group. Swapping a Cys for a Ser is considered quite a conservative move, but when looking at previous reports on the effect of such mutation, the consensus was that it always impacted significantly the hydrolytic ability of such enzymes, unless additional engineering was carried out.4 Only we were interested in synthetic reactions mediated by MsAcT not hydrolysis which is in fact an annoying side effect.

The S11C mutant was rapidly created and while we have to use slightly activated esters as donors (vinyl esters), this variant happily accepts not only thiols, but also secondary amines too (yielding tertiary amides) and we have demonstrated the newly acquired synthetic capability on a 250mM without ever observing any hydrolysis. Finally, we also showed that this enzyme could be employed in the synthesis of acetyl-CoA from CoA and vinyl acetate, for which the only known pathways require ATP-dependent enzymes.

We believe we have unlocked a new combination in the catalytic triads which nature seem to have disfavoured, possibly to tighten the control on reactivity, but that for a chemist could be a real goldmine. 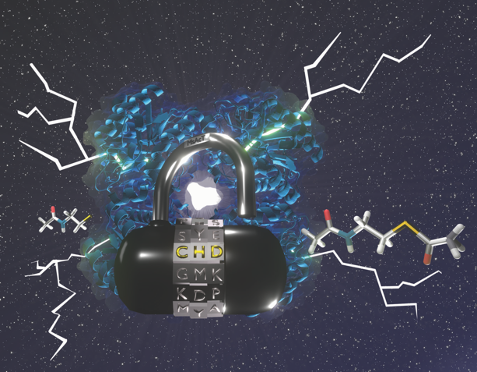 A very simple mutation of the nucleophilic residue of a catalytic triad of an acyl transferase has dramatically expanded its synthetic scope, enabling the use of the mutant variant in the preparation of thioesters and tertiary amides