A serendipitous discovery of a novel wetting mechanism

Classical theory of wetting of an ‘immiscible’ emulsion drop on a solid surface requires that a liquid bridge be formed, which connects the drop and the solid surface, and that this bridge moves laterally outwards to complete the spreading process. Here, we show that due to trace solubility of the drop phase in the suspending medium, dissolved drop phase can diffuse to the solid surface, and then nucleate and grow in the form of islands. Coalescence between the parent drop and one of the islands completes the wetting process.

During the initial phase of my PhD, I was tasked with studying the gravitational settling of liquid droplets suspended in a second, less dense liquid medium, towards a solid substrate.  This was to get acquainted with a microscopic technique called interferometry.  Interferometry is an experimental method to deduce the shapes of interfaces1.  After reflecting off multiple interfaces, light interferes to either add or subtract in amplitude, causing constructive or destructive interference, respectively, producing an interference pattern.  For a circular object near a flat substrate, concentric rings of dark and bright fringes are obtained, much like Newton’s rings, and represent a contour map of the topology of the interface.

To conduct such a study, I picked a system of glycerol droplets suspended in silicone oil, settling towards a mica substrate.  The aim was to study how a glycerol drop approaches a surface as it traps a thin film of silicone oil between the droplet and the mica substrate.  By performing interferometry, I was going to be able to study the dynamics of drainage of this film, reconstruct the film shapes and compare the results with theory2.

Based on literature, the anticipation was that the film will drain until the droplet is close enough such that intermolecular and surface forces come into play.  Since mica is hydrophilic, it was expected that a glycerol droplet would readily spread on the substrate.  This would occur by the formation of a bridge connecting the glycerol droplet and the substrate, followed by the lateral growth of the bridge, completing the wetting process3.  Instead, what we saw was that the film drains to a thickness of about 10 nm and then ceases to drain further.  It took us a while to realize that silicone oil molecules interact strongly with and adsorb to the mica surface, leading to a solid-like film that is very hard to dislodge.  Such observations have been previously reported in literature but not in the context of emulsion-based wetting4.

Occasionally, I would observe the emergence of tiny island-like droplets on the mica surface.  We initially concluded that it was dirt or impurities, and even in some cases discarded the data that showed this, by rationalizing that it was a failed experiment.  But then, after repeated observation of these islands, I decided to take a time lapse video of for a few hours, only to see these islands grow as a function of time.  I realized that I had stumbled upon something that was worth pursuing. 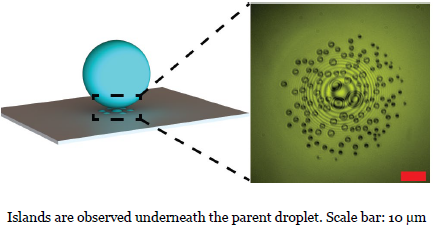 Since there was apparently no reason why the mechanism should not be observed beyond polymeric suspending media, we established the generality of the mechanism by showing that it would occur for castor oil as the suspending medium as well as when the substrate was changed to other hydrophilic cases such as glass and plasma-treated cured epoxies.  We observed island growth underneath the approaching parent droplet for all these scenarios, albeit the coalescence was instantaneous unlike that for silicone oil.

For plasma-treated epoxy substrates, we made an interesting observation:  the islands commenced growth at substantial separations (a few microns) between the parent glycerol droplet and the substrate.  It made us realize that a boundary layer of dissolved glycerol must be present around the settling glycerol droplet, and if the film thinned down to length scales of the order of the boundary layer thickness, the substrate would feel the presence of dissolved glycerol, and the islands would then begin to grow instantly (assuming that the nucleation kinetics are rapid).  With the knowledge of the film drainage dynamics, island growth kinetics and a measure of boundary layer thickness, we were able to successfully estimate the wetting time scales and compare them with the experimental results.  This was a major milestone.

With all these findings, we set out to write and submit a manuscript for publication at Nature Communications.  The review process was deep and detailed, with important questions being raised. One of the main questions was, why do the small islands grow despite Ostwald Ripening?

The question of stability of islands stumped us even before submission of our manuscript to Nature Communications.  Why do the islands of high curvature grow at the expense of a low curvature parent droplet, seemingly defying the principle of Ostwald ripening?  Ostwald ripening is based on the Kelvin equation, which dictates that an interface with high curvature, has a higher solubility associated with it, in comparison to a low curvature interface5.  Deep scouring of literature informed us that the Kelvin equation is modified for a sessile droplet residing on a flat substrate, in contrast to a bulk droplet.  This lesser-known extended Kelvin equation elucidates that, near the contact line of a sessile drop, the disjoining pressure (intermolecular and surface forces) dominates the Laplace pressure (interfacial curvature effect)6.  If the net interaction between the drop phase and the substrate is attractive in the presence of an intervening suspending medium, then the solubility near the contact line is lower than the rest of the island surface area.  This sets up a chemical potential gradient, that drives mass transfer from the parent droplet towards the contact line region, thereby accounting for a net growth and stability of the islands.

This study represents a fundamental breakthrough that has enormous implications in the field of surface science, mineral flotation, liquid-infused surfaces, stability of nanobubbles and breaching of solid particles at liquid-liquid interfaces.  Typically, one does not consider trace solubility between two liquid media in the context of emulsion-based wetting.  Here in this work, we have shown that under conducive conditions, this trace solubility in seemingly “immiscible” liquid systems, can cause drop phase islands to grow, followed by a coalescence between the parent drop and one of the islands.  A major consequence of this mechanism is that the time scales for wetting can be much shorter than the case where the thin film must drain to smaller thicknesses to form a direct bridge with the solid surface.

The published article can be found here.

A new catalyst for asymmetric [2+2] photocycloadditions 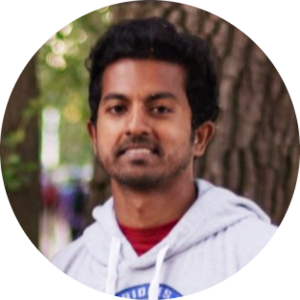