In the face of global plastic pollution, enzymatic degradation of poly(ethylene terephthalate) (PET) has attracted much attention. Now, structural and biochemical studies reveal a minimal mutational strategy to increase the activity of PET-degrading enzymes, with potential evolutionary implications.

Polyethylene terephthalate (PET) is extensively produced plastics, with annual production approaching 70 metric tons. Huge amount of PET wastes that enter and accumulate in the ecosystem has caused a serious threat to the global environment. PET wastes are mainly incinerated or landfilled, but these methods result in secondary pollutions. Therefore, developing environmental friendly measures to eliminate PET wastes is an urgent task.

PET is composed of ester bond-linked terephthalate (TPA) and ethylene glycol, which is presumably susceptible to enzyme-mediated hydrolyzed. Several types of esterases, including lipases, carboxyl esterases, and cutinases, have been reported to exhibit PET-hydrolytic activity 1. Lipases cover the catalytic center with a lid structure, which needs to be lifted via interface activation to be accessed by substrates. Carboxyl esterases possess a narrow substrate-binding pocket, which restricts their capacity to bind PET. Cutinases are the most effective PET-hydrolytic enzymes known so far. Nevertheless, all these enzymes show low PET hydrolytic efficacy because PET contains a high ratio of aromatic moieties and impact polymeric structures 2. Furthermore, only enzymes that can operate at temperature higher than the glass transition temperature of PET (60-70ºC), where the crystalline structure of PET can be resolved, show notable hydrolytic activity. In 2016, a PET-assimilating bacteria named Ideonella sakaiensis isolated from a PET recycling factory reveals a naturally evolved PET degradation machinery 3. This bacterium secretes a cutinase-like enzyme, denoted IsPETase, to hydrolyze PET into smaller compounds mono(2-hydroxyethyl) terephthalic acid (MHET) and TPA at ambient temperature (30-35ºC). These small compounds are then transported into bacterial cells and then metabolized.

Distinct from canonical cutinases that are found to show PET hydrolytic activity, IsPETase exhibits a substrate preference towards PET over fatty acids (component of cutin). This indicates that IsPETase features a substrate-binding pocket architecture that is suitable for PET binding. To uncover the mechanism of action of IsPETase, we solved the crystal structure of IsPETase and its complex with substrate/product analogues and identified several unique features 4. First, the enzyme has an extra disulfide bond in addition to the one that is strictly found in all known cutinases. This extra disulfide bond stabilizes a loop region, also unique to IsPETase, which constitutes the substrate-binding pocket. Depleting this extra disulfide bond leads to active site collapse and severely impacts the enzyme activity 5. We identified several previously uncharacterized IsPETase-homologous cutinases that share these two features from genbank in an attempt to search for more potent PET hydrolytic enzymes. The recombinant protein of several enzymes were obtained, but all of them display very low PET hydrolytic activity comparing to IsPETase.

In addition to the extra disulfide bond and the loop, we also found that the substrate-binding pocket of IsPETase is more flexible than that of other cutinases. This is attributed to the wobbling conformation of a TPA moiety-binding residue W185 4,6. In the apo-form structure, three different conformations of W185 were observed, which are denoted as type A, B and C. In the substrate analogue-bound IsPETase, W185 adapts “type B” conformation. This attracts our attention as W185 is strictly conserved in cutinases but all of them display “type C” conformation, which is not a favorable PET-binding pose. We considered that the W185 wobbling is associate to PET binding and thus inspected the W185-surrounding region to search for the possible factor that causes this phenomenon. By comparing IsPETase and canonical cutinase structures, we found that a His residue is located beneath the W185-corresponding residue in canonical cutinases, whose imidazole side chain packs against the indole side chain and prevents Trp from swinging. Significantly, His residue is strictly conserved in all cutinases. In IsPETase, this His residue is replaced by a smaller residue Ser (S214), such that W185 is not packed and is free to swing. We hypothesized that Ser substitution in IsPETase leads to W185 wobbling, which results in more flexible substrate-binding pocket and higher PET-binding capacity. Mutagenesis experiments showed that the PET-hydrolytic activity of IsPETase S214H variant is reduced by ~50%. We thus considered that His-to-Ser mutation is the key to transform a canonical cutinase to a specified PET hydrolase, and introduced His-to-Ser mutation in other IsPETase-homologous cutinases in an attempt to obtain more novel PET hydrolases. But once again, none of His-to-Ser variants shows elevated PET hydrolytic activity.

Although we were frustrated by the biochemical results, we kept working on structural analyses. The crystal structure of an IsPETase-homologous enzyme from Burkholderiales bacterium, denoted BurPL, was solved. The overall structure is highly identical to that of IsPETase, but the β6-β7 loop that accommodates the W185-corresponding residue of BurPL is less flexible than that of IsPETase. In BurPL, the side chain of a Phe residue that is located beneath the W185-corresponding residue propels the Trp Cα to keep β6-β7 loop in position. In IsPETase, the Phe-corresponding residue is replaced by Ile (I218), whose side chain is smaller than the phenyl group of Phe such that the spatial hindrance of the W185-locating β6-β7 loop is relieved. We were amazed to find that the Ile residue is also unique to IsPETase, and the corresponding residue in other homologous enzymes is Phe (Figure 1a). We thus introduced His-to-Ser and Phe-to-Ile double mutation (DM) in BurPL and found that the variant showed threefold increase in PET-hydrolytic activity. For another IsPETase-like cutinase from Polyangium brachysporum (PbPL), introducing DM enhances its PET-hydrolytic activity by ~tenfold (Figure 1b). We also introduced DM in five cutinases that are more phylogenetically distant from IsPETase, and four of them show significant increase in PET-hydrolytic activity, including two that lack the IsPETase unique extra disulfide bond and loop. These results indicate that Ser/Ile DM might be a minimal requirement to transform a canonical cutinase to a specified PET hydrolase, and the predecessor of IsPETase might acquire Ser/Ile DM to increase the flexibility of substrate-binding pocket to increase the binding capacity to the bulkier PET.

Figure 1 The structural and functional role of IsPETase-unique Ser/Ile duo. (a) Crystal structures of IsPETase and BurPL. Critical residues and PET substrate analogue 1-(2-hydroxyethyl) 4-methyl terephthalate (HEMT) are shown and displayed by sticks. The conformation of W185 and corresponding Trp are noted. (b) The PET-hydrolytic activity of wild type and mutant enzymes. The MHET and TPA released in each reactions are determined and shown. IsPETase DM carries His/Phe duo, while PbPL DM and BurPL DM carry Ser/Ile duo.

PET appears in our world for only less than 70 years, which is believed too short for microorganisms to generate de novo PET decomposing enzymes. On the other hand, modifying the existing enzymes to adapt the newly emerged substances would be a fast and efficient strategy. For Ser/Ile DM, mutating as few as three nucleotides can results in His-to-Ser and Phe-to-Ile substitutions. In addition to the evolutionary significance, DM could be a very important strategy to obtain more PET hydrolytic enzymes. Considering that the development of bio-based PET degradation platforms may demand enzymes that match various vectors or operate under different conditions, establishing a panel of PET hydrolytic enzymes should be necessary. In addition, these results highlight the importance of crystallography in studying enzyme mechanism, as information such as amino acid side chain wobbling and loop vibration are difficult to access unless crystal structures are solved. Moreover, the two residues associated with DM that do not directly contact the substrate can influence the architecture of substrate-binding pocket. This encourage us to expand the range of investigation when looking at the catalytic center, as the amino acids that are not directly involved in forming the active site may deploy critical effects to govern the enzyme actions.

Finally, we would like to appreciate our excellent group members in State Key Laboratory of Biocatalysis and Enzyme Engineering, and School of Life Sciences in Hubei University, Wuhan, China. 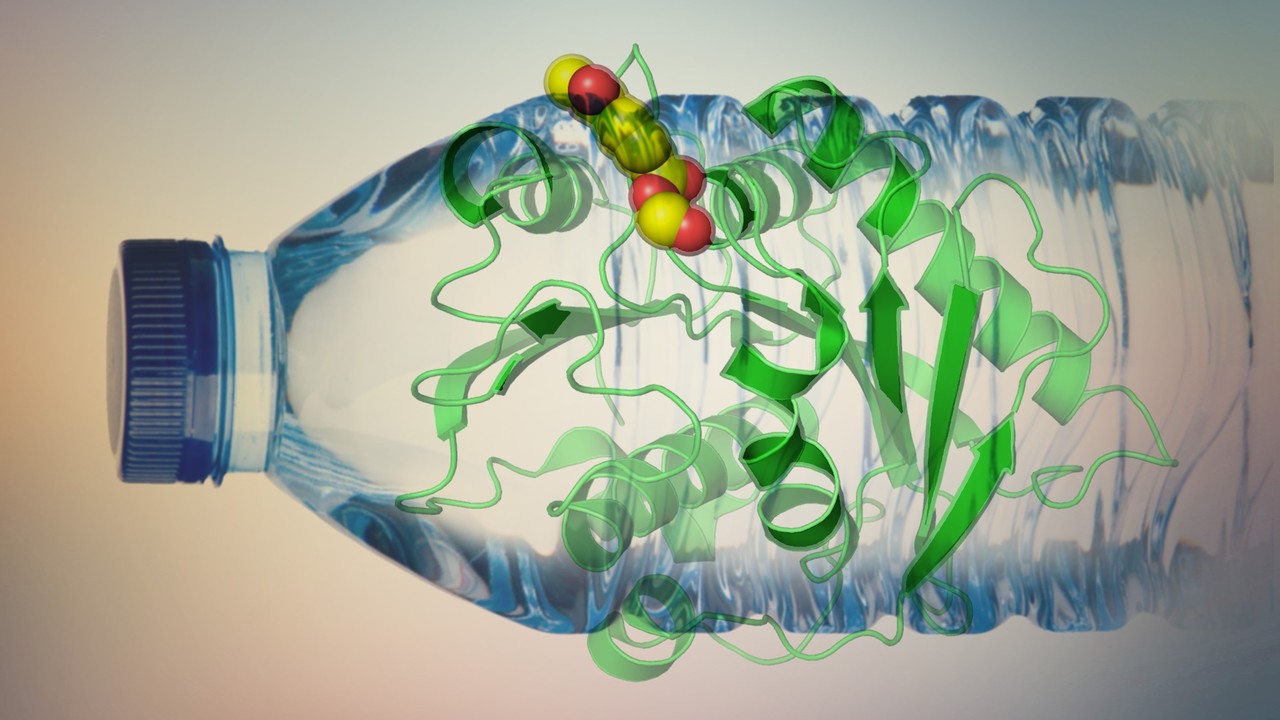