Site-selective functionalization of nearly identical C–H bonds has been a long-standing challenge. Now, a regioselective C–H amination has been achieved by [CpxIr(iii)] catalysis, which senses subtle electronic differences of allylic C–H bonds induced by remote electron-withdrawing groups. A linear…

Direct functionalization of ubiquitous C-H bonds of feedstock chemicals to produce valuable building blocks represents one of the most attractive synthesis in modern synthetic chemistry. While selective functionalization of n-hexane at each position is a huge problem, the reality is that most molecules that chemists care about are adorned with functional groups. Thus, a more practical challenge is how to take advantage of the resident functional group to activate a single C-H bond among many others.

The biggest barrier to accomplish this goal is the lack of methods to distinguish between multiple C-H bonds that are electronically and sterically similar. Projects targeting such selectivity issues have always been very appealing to the Rovis group. In this study, we describe a regioselective allylic C-H amination of unsymmetrical disubstituted olefins. Two regioselectivity issues are discussed: 1) C-H activation selectivity between two similar allylic C−H bonds and 2) amination selectivity between two marginally distinguishable reactive sites of the resulting metal-allyl species.

This work was conducted in the context of our Rh(III) and Ir(III) catalysis for C-H activation project [1]. We had recently reported that alpha olefins may be aminated with high regioselectivity using Ir(III) catalysis [2]. We hoped to translate these insights from simple terminal alkenes to more functionalized, and more common, internal alkenes.

Our initial attempts to discriminate the two allylic C-H bonds relied on utilizing a chelating directing group on one side of olefin. It exploits the differences in conformational energies of the in situ generated metallacycles in the transition state, so that a particular C−H bond is favored. Initially, we observe modest selectivity favoring the activation of the remote C-H bond (C-Hb) when an ester was applied as a directing group. This was a bit surprising to us at that moment since chelate-assisted strategies usually favor the proximal C-H bonds to the directing group. With this seed of doubt in mind, we surveyed a number of “directing groups”, which resulted in a change of hypothesis to inductive electronic effect instead of chelation effect. For example, a simple chloro group also leads to excellent selectivity between the two allylic C-H bonds. This initial discovery eventually led us to develop an Ir(III)-catalyst that could discriminate subtle electronic differences of allylic C-H bonds induced by remote electron-withdrawing groups. More importantly, the selectivity can be predicted based on the discovery of a linear relationship between the Δ1JCH coupling constants of two competing C−H bonds and the difference of C−H activation barriers (ΔΔG‡).

The selectivity issue between two reactive sites of metal-allyl species has been a long-standing challenge not only in allylic C-H functionalization but also in more extensively explored area of allylic substitution. Previously, most studies were limited to terminal allyl-metal species or electronically biased aryl-allyl metal species. In our study, we targeted dialkyl substituted metal-allyl species which contain two nearly identical reactive sites. To cut a long story short, the regioselectivity was found to be affected by two factors: one is the inductive electronic effect of a remote functionality and the other one is the steric effect of the Cp ligand on the catalyst. It’s worth noting that the electronic variance of the Cp, unexpectedly, doesn't seem to affect the regioselectivity while the steric effect shows a profound influence.

Finally, we anticipate that our discovery will help to improve general application of allylic functionalization reactions. If you are interested, please check out our paper here: https://www.nature.com/articles/s41557-020-0470-z 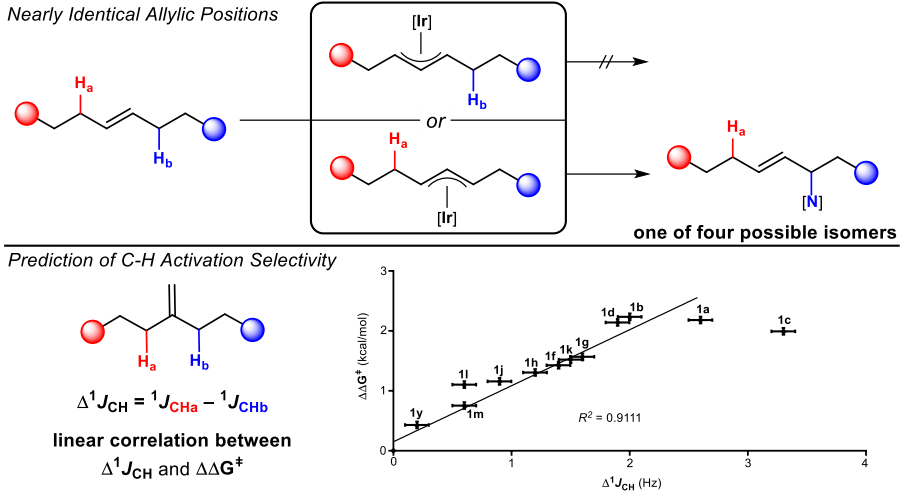