“Starting a new green evolution” was what the consortium of the EU-funded project Future Agriculture set out for, when it was kicked-off in January 2016. The project aimed at designing and developing synthetic metabolic pathways that allow more efficient carbon dioxide fixation in plants in order to improve agricultural production. In the beginning, several pathways were envisioned to enable more efficient photorespiration routes [1]. Photorespiration is absolutely necessary in plants, because it recycles and detoxifies a toxic side product of the plants’ carbon dioxide fixation. The naturally occurring pathway is rather inefficient, because it requires a lot of energy and releases carbon dioxide; it is one of the main limiting factors in agricultural productivity.

One of the project’s most favorable newly designed pathways is the tartronyl-CoA (TaCo) pathway. It has a short reaction sequence and requires only five instead of eleven enzymes. Furthermore, it is highly energy-efficient and as its biggest advantage, carbon dioxide is fixed instead of released. Therefore, it is very promising as a potential gain-improving pathway in plants. We, the group of Prof. Dr. Tobias Erb, were in charge of awakening this pathway to life biochemically, as it only existed as an idea on the paper in the beginning.

As the TaCo pathway represents a synthetic metabolic pathway, the enzymatic conversions required for its realization were not known to exist in nature, which posed a big challenge.

We set out to search for enzymes that could possibly perform the required enzymatic conversion and looked for enzymes that perform analogous reactions with structurally similar substrates. Indeed, we were able to identify such enzymes, albeit with comaratively low specific rates. In order to enhance the specific activity of these enzymes, we applied rational design based on computational models as well as high-throughput screens of randomized enzyme libraries. Most demanding was the development of the key enzyme, which is the carboxylating enzyme of the pathway, glycolyl-CoA carboxylase (GCC). We developed ultrahigh-throughput microfluidic assays to screen for better enzyme variants. The combination of the high-throughput screens and the initial rational design yielded an enzyme variant with a 900-fold improved catalytic efficiency compared to the wildtype enzyme (Fig. 1).

In our paper, we show that the full TaCo pathway is functional as a photorespiratory bypass in vitro. Therefore, an implementation of the pathway into plants would be feasible and could help to improve agricultural productivity to feed an ever-growing world population. Furthermore, we demonstrated as a proof-of-principle that the TaCo pathway could be combined with other synthetic carbon dioxide fixation cycles. This would enable their direct coupling to the central carbon metabolism of bacteria for example and could drive the production of value-added compounds from carbon dioxide. Finally, we also show that the TaCo pathway could be applied for ethylene glycol recycling (a component of the plastic polyethylene terephthalate).

Taken together, the engineering of a new-to-nature carboxylase in combination with the realization of the whole TaCo pathway open up completely new possibilities for the utilization of carbon dioxide.

Find out more about the TaCo pathway in Nature Catalysis. 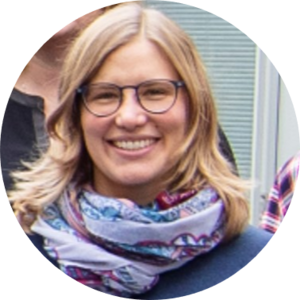