Highly dynamic structural changes at the surface of working copper electrocatalysts are observed under CO oxidation reaction conditions. These changes turn out to be key to the high performance and could be a design target for future improved catalysts.
Andrea Auer
PhD student, University of Innsbruck
Follow
Like Be the first to like this
0

CO is a key intermediate in the electro-oxidation of energy carrying fuels which typically acts as a poison. Here, the authors demonstrate that Cu is an efficient CO electro-oxidation catalyst in alkaline electrolyte due to the continuous formation of undercoordinated active Cu adatom sites in the p…

Catalysts accelerate chemical reactions and thus make them useable for large-scale technological applications. Not least for a sustainable supply of energy, they are therefore needed more than ever. Efficient catalysts are at the core of fuel cells that convert chemical into electrical energy or electrolyzers that split water or synthesize fuels. Unfortunately, presently they often consist of rare elements, such as platinum or iridium. In searching for abundant alternatives, modern catalysis research is aided by the centuries-old Sabatier Principle. It states that a good catalyst material should bind the molecules that participate in the chemical reaction, neither too strongly nor too weakly to its surface. The bonds should be strong enough to activate the molecules for the reaction, but still weak enough to not hold on to them forever. Unfortunately, many materials follow so-called scaling relations. They tend to bind different molecules either all stronger or all weaker. In contrast, for many reactions, catalysts would be needed that selectively bind certain molecules stronger and others weaker.

Via a fruitful collaboration between the electrochemical surface science team in the Kunze-Liebhäuser group and specialized theoreticians from the Reuter group, we have discovered that copper (Cu) has its own solution to this problem. In the course of the electro-oxidation of carbon monoxide (CO), one of the most important intermediates in oxidation reactions in fuel cells, we found that the surface of the Cu catalyst continuously restructures and forms small islands consisting of a few Cu atoms.  These protruding, nanometer-sized clusters provide high-energy undercoordinated active sites, which are generated in-situ by the surface restructuring. Intriguingly, they exhibit significantly different binding characteristics for the dissolved, neutral CO molecules and the charged hydroxid (OH-) ions, both involved in the CO electro-oxidation reaction in alkaline solution (see movie, Credit: Kevin Ploner). The simultaneous strengthening of the CO and weakening of the OH binding makes the observed high activity possible.

The possibility of changing the binding strength separately and individually for neutral and charged molecules through cluster-like protrusions on the catalyst’s surface could represent a completely new approach to fulfilling the Sabatier Principle. On Cu these clusters form spontaneously during the dynamic restructuring of the surface under reaction conditions. In the future, one might want to create them deliberately via rational catalyst design. 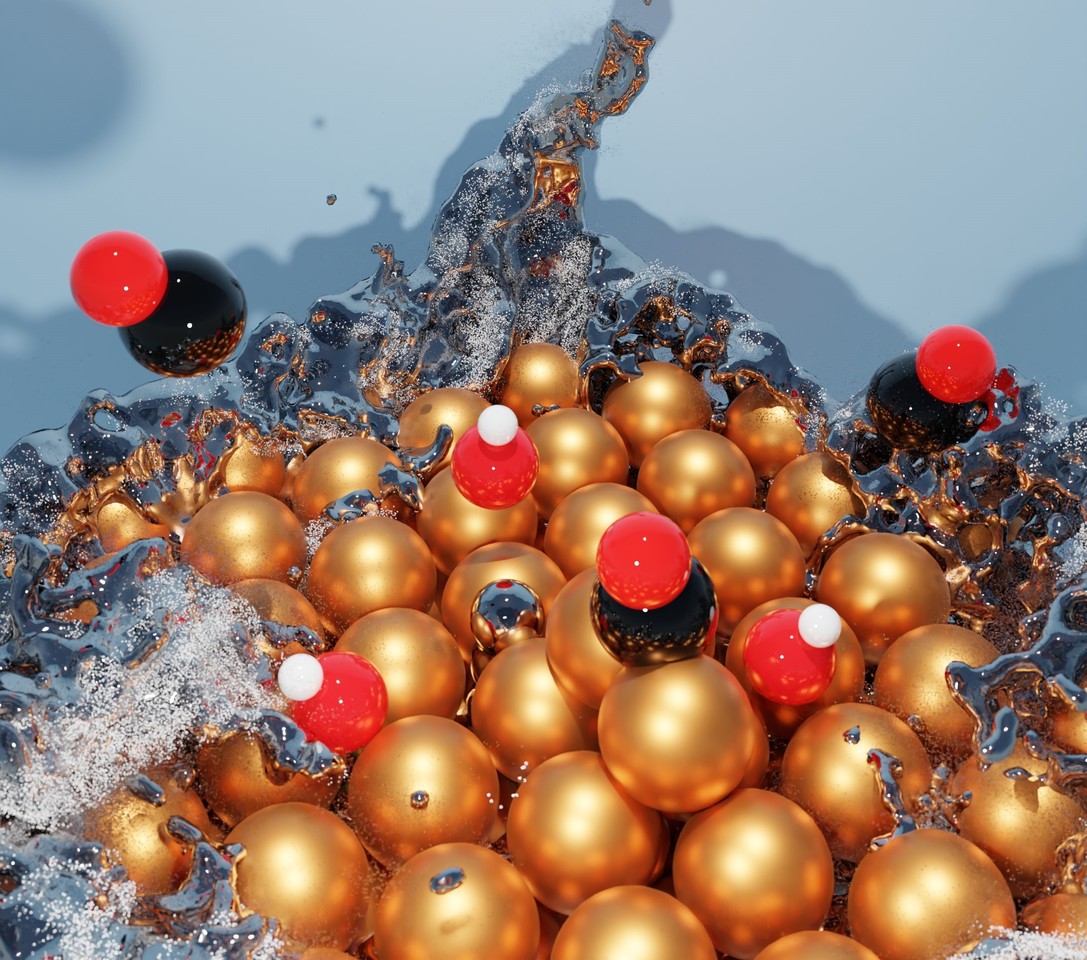 Highly dynamic structural changes at the surface of working copper electrocatalysts are observed under CO oxidation reaction conditions. These changes turn out to be key to the high performance and could be a design target for future improved catalysts.