A community from Nature Research
Contributor Nature Chemistry
Behind the Paper, Journal Club

Adaptive insertion of a hydrophobic anchor into a poly(ethylene glycol) host is an effective non-covalent strategy for programmable surface functionalization. With this strategy we challenge the hydrophilic understanding of PEG, which may contribute to the design of drugs and vaccines involving PEG.
Daniela Wilson and Shaohua Zhang
2 contributors
Like Liked by Sorrel Bunting and 1 other
0

Modulation of surface properties and functions can be achieved through covalent and non-covalent molecular binding, but the lack of responsiveness and requirement for specific binding groups makes spatiotemporal control challenging. Now, it has been shown that adaptive insertion of a hydrophobic anc…

Through billions of years of evolution, cells have achieved signal transfer, cargo transport, and energy conversion with a ‘simple’ plasma membrane1. As a chemist, we are interested in building artificial systems to mimic these functions, which is the key step toward the development of adaptive and intelligent materials. For cells, the customized functions rely on spatial-temporal control over the species, distribution, and orientation of proteins loaded onto the membrane. The starting point for this long journey is to develop a spatial-temporal controlled surface functionalization strategy.

Covalent and non-covalent binding are two strategies to attach the functional modules to the materials’ surface. Click chemistry, winner of the 2022 Nobel Prize in chemistry, provides an efficient attachment strategy while sharing the non-responsive nature of the covalent binding strategy. To retain the responsiveness, biomolecular recognition and host-guest interaction have been used to attach functional modules by forming non-covalent interactions. The loaded functional modules can be released by adding competitive host/guest molecules or through the photoisomerization of the guest molecule2, 3. However, the non-covalent binding strategy would require the attachment of host molecules, such as cyclodextrins and cucurbiturils, onto the surface of the materials in advance. The uncertain attachment efficiency and lack of control in the orientation of the host molecules compromise the application of host-guest interaction for surface functionalization. This led us to ask ourselves “Do we need such an elaborate host molecule for surface functionalization?” When we looked back to the “induced fit model” suggested by Daniel Koshland in 1958 to describe enzyme-substrate binding, we envision that flexible polymer chains, similar to the polypeptide chains of enzymes, might be able to adapt to the size and shape of guest molecules and act as the host4. The use of polymer chains as the host would enable a new non-covalent strategy for surface functionalization.

Polyethylene glycol (PEG) is one of the most widely used hydrophilic polymers on materials’ surfaces, for instance, stealth corona on drug carriers (Figure 1), antifouling coating on implanted materials, capping ligands on nanoparticles, etc.5-7 PEG chains are well hydrated in an aqueous medium by forming hydrogen bonds with water molecules8. The association of a guest molecule with PEG should require the breakage of these hydrogen bonds and the removal of water molecules from the binding site, just like the protein-ligand binding9. The dehydration of PEG was thought very difficult due to the energy loss in breaking these hydrogen bonds and the chain conformational entropy loss. Thus, although widely existing on materials’ surfaces, PEG has never been explored as the host. Recent simulations demonstrated that the release of water molecules bonded to PEG can compensate for the chain conformational entropy loss, turning the dehydration of PEG into an energy-driven process10. Hydrophobic graphene and carbon nanotubes composed of sp2-hybridized carbon atoms successfully drive the dehydration of PEG, suggesting that their binding energy was enough to break the hydrogen bonds11, 12. Thus, we hypothesized that polycyclic aromatic hydrocarbon, bearing a similar chemical structure to graphene, can break the hydration layer and act as the guest (anchor) of the PEG host (Figure 1). Unlike the host with the hydrophobic cavity, the favorable hydration of the PEG host should allow the adaptive insertion of the anchor for programmable surface functionalization.

To test this hypothesis, we designed and synthesized a series of molecular probes comprising of polycyclic aromatic hydrocarbons as the anchor and an osmium complex (Os) as the model functional module. Figure 2a shows a representative molecular probe using the hydrophobic pyrenyl group as the anchor (Py-PEG4-Os). Such design has the following merits: 1) the hydrophilic -PEG4-Os can increase the aqueous solubility of Py, 2) the polarity-sensitive fluorescence of Py can reflect the position of the anchor13, and 3) photoinduced electron transfer from Os to Py can quench the fluorescence of Py and validate the conformation of the loaded molecular probe. As for the PEG host, we chose polymersomes with glassy polystyrene (PS) core and Peg corona due to their well-defined structure and high stability (Figure 2b)14. When combined in water, Py-PEG4-Os is automatically loaded onto polymersomes in 2 minutes. By combining experiments and molecular dynamics simulation, we showed that Py is embedded into the PEG corona by forming van der Walls interaction and hydrophilic functional modules are left on the surface of the PEG corona. The loading of the molecular probe can be switched off and on by adding polystyrene sulfonate and calcium chloride sequentially (Figure 2c).

In summary, we discovered a new non-covalent strategy for programmable surface functionalization by harnessing PEG corona as the host and pyrene as the anchor. This non-covalent binding strategy is distinctive in its high efficiency, short functionalization time, mild conditions, controlled molecular orientation, and capability of dynamic loading. We envision that this new molecular binding mode will enable the design of next-generation functional systems and enhance the progress in nanomedicine, nanotechnology, and advanced materials.

Systems Chemistry Department within Molecules and Materials (IMM) of Radboud University located in Nijmegen, the Netherlands (https://www.ru.nl/systemschemistry/). Our group is dedicated to the design and construction of synthetic motile systems with life-like features through the bottom-up strategy and supramolecular chemistry. Prof. dr. Daniela A. Wilson, head of the group, has been awarded an ERC Consolidator grant for the project ‘Molecular Engineering of Synthetic Motile Systems towards Biological Environments (SynMoBio)’. We always welcome ambitious, passionate, and talented students and scientists with a strong background in supramolecular chemistry, organic synthesis, polymer chemistry, nanomotor design and biochemistry to join our multidisciplinary and multicultural group. 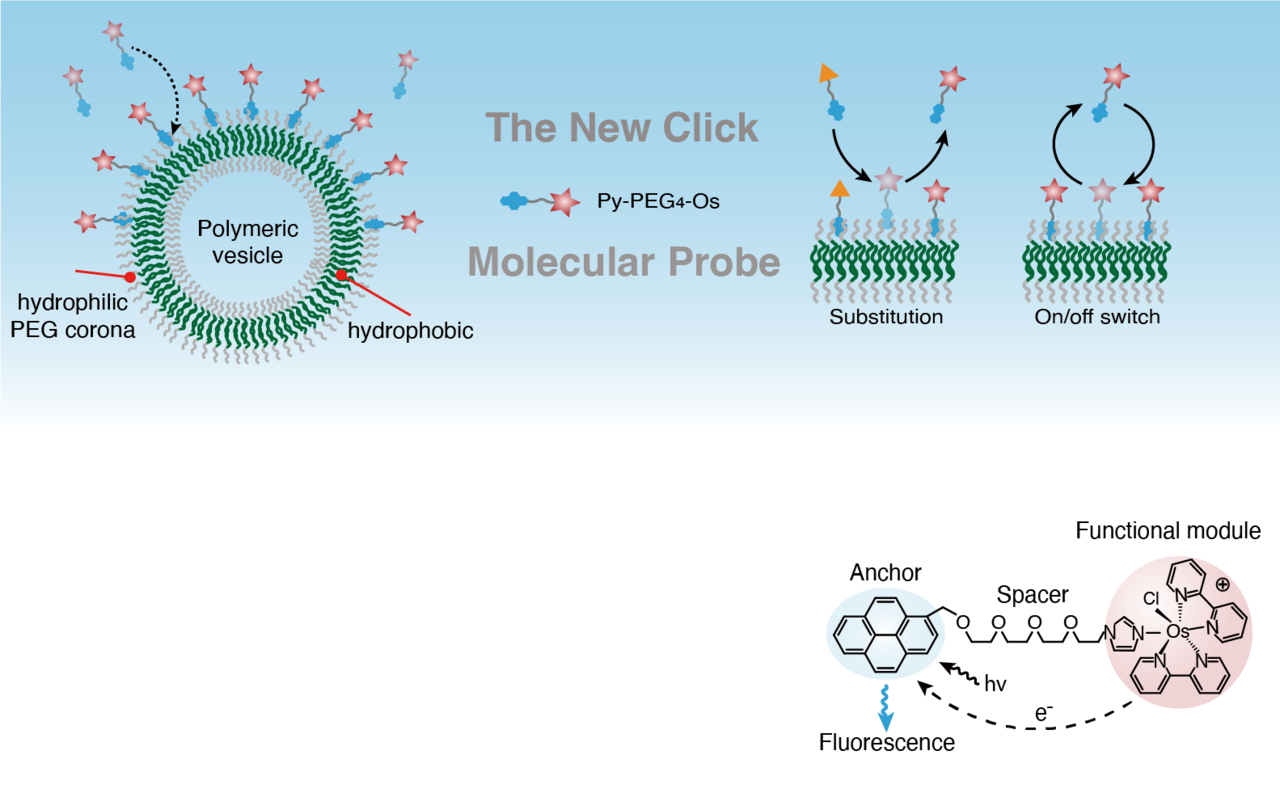 Adaptive insertion of a hydrophobic anchor into a poly(ethylene glycol) host is an effective non-covalent strategy for programmable surface functionalization. With this strategy we challenge the hydrophilic understanding of PEG, which may contribute to the design of drugs and vaccines involving PEG.