Life on Earth originated from simple molecules brought on Earth by meteorites. How did these molecules assemble into compartments able to withstand the early planet’s extreme environment? We found a possible strategy to obtain stable proto-membranes at high temperature and high pressure
Loreto Misuraca
PhD student, Institut Laue Langevin
Follow

Fatty acid membranes are implicated in several hypotheses about the origins of life, but whether their stability towards extremes of temperature, pressure, and ionic strength is sufficient to enable primitive biochemistry remains unclear. Here branched and linear alkanes are shown to stabilise a com…

The origin of life on our planet is an intriguing, long-standing question. Although, to date, we do not possess any direct evidence of a life-forming event on Earth nor elsewhere (and it is not guaranteed we will find it), it is possible to re-formulate the question in a way that can be tackled by experimental science:

Is it possible to re-create life in the lab, from simple components?

By coupling the quest to synthesize artificial life with the use of very simple molecules that are often found in meteorites, one could successfully determine at least one of the possible paths (if more exist) to originate life from scratch.

In our work, in particular, we focused on a critical “bottleneck” for understanding life’s origin. Given that short and simple molecules were the only available components, how did they create the ancestor of the proto-cell membrane (protomembrane)? Most importantly, how could this membrane withstand the harsh environmental conditions (high temperature, high pressure) of the young Earth?

For that, we hypothesized a simple protomembrane model made by a bilayer of short chain fatty acid (decanoic, or “capric” acid) and alcohol (decanol), with a small percentage of hydrocarbons (eicosane or squalane) between the two membrane leaflets (Fig. 1). Our aim was to test whether the insertion of such hydrocarbons in the membrane could confer a greater resistance towards high temperature, high pressure, or both simultaneously.

We performed the investigation from both a structural and dynamical point of view, by using small angle x-ray/neutron scattering (SAXS - SANS) and elastic incoherent neutron scattering (EINS) at the large scale facilities Diamond Light Source (UK) and Institute Laue Langevin (FR) respectively. Our samples were in the form of so-called multilamellar vesicles (MLVs), onion-shaped concentric shells made of the protomembranes described above, for which we followed swelling/shrinking/phase separation (SAXS) and average dynamics of the fatty acid and alcohol tails (EINS).

An extremely useful advantage of doing science by exploiting these large facilities is that innovative techniques and instrumentation are available for all users. In our case, we could profit from special sample environments for liquid samples specifically designed for SAXS and EINS, that allowed us to tune and precisely control both temperature and hydrostatic pressure in the ranges of our interest (20 < T < 85 °C and 1 < p < 1000 bar). Of course, this comes with a price: once an experimental proposal is accepted, users are given a limited amount of experimental time (beamtime) depending on the proposed experiment needs.

That is where the challenge lies: from my personal PhD experience (mostly with neutron beamtime at ILL), I can say that every beamtime never failed to remind me how deep is the gap between the experimental plan and the experiment itself, especially when performed over a short amount of time (few days), 24h per day.

I will take the chance to give a few tips to possible new interested users of neutron/x-ray facilities:

The experimental fun was further increased because of our need of high-pressure equipment for the measurements. To keep a sample at a stable pressure, precisely measured and avoiding leaking here and there, is a technical challenge that probably only people used to high-pressure experiments can appreciate.

During the SAXS experiments, all technical difficulties (related or not to high pressure equipment) meant to work day and night, for 2.5 out of 3 days, in vain. I am proud to say that we did not give up until the last hour of beamtime, and the last night of measurements was the one that eventually led to our paper in Communications Chemistry! With EINS it went much better experimentally, as we could measure all the samples needed and the pressure cell only broke during the last scan with a less important sample inside (although the ILL sample environment team might not have been as positive as me with the outcome) (Fig. 2).

However, after such a large amount of scientific and technical effort involved that could hardly be summarized here, we found that our hypothesis works!

We observed clear effects of the hydrocarbon incorporation within the bilayer, that all go in the direction of a stiffer, more resistant membrane toward high temperature and high pressure (even the two combined). Both the eicosane and squalane help dampening the membrane fluctuations that are fueled by thermal energy. Furthermore, the acid/alcohol tail dynamics is lowered by the addition of eicosane at all temperature, presumably preventing the excess dynamics that eventually leads to membrane disruption at high temperature. The effect of pressure is canceled almost completely by the alkane insertion, as another promising evidence of a more stabilized membrane.

These findings open up for new possibilities for such simple cell membrane ancestors to survive the extreme environment of the early Earth, therefore they constitute another step in our search for the conditions to the emergence (and re-creation) of life.

Read more about the study in Communications Chemistry. 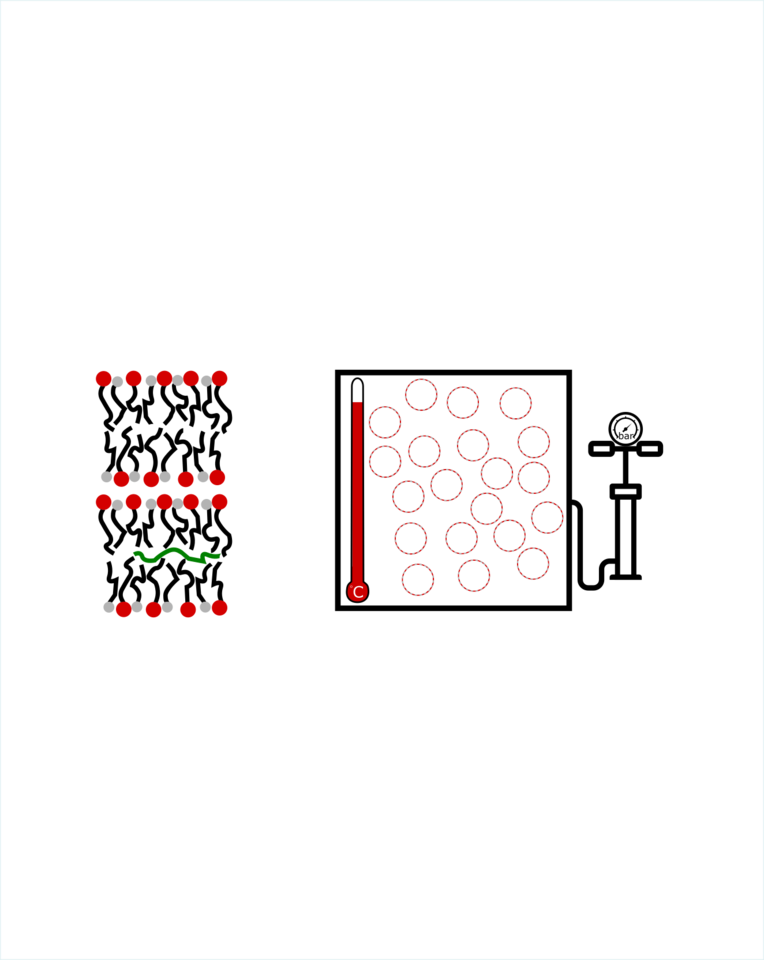 Life on Earth originated from simple molecules brought on Earth by meteorites. How did these molecules assemble into compartments able to withstand the early planet’s extreme environment? We found a possible strategy to obtain stable proto-membranes at high temperature and high pressure