Wide rivers drive key atmospheric processes such as river winds, and there can be significant impacts on local and regional chemical transport and climate. River winds are induced by the daily thermal contrast between the land and the river. During the daytime, warmer temperatures over the land due to its lower land surface heat capacity promote the ascent of air parcels, which in turn drives onshore air movement from the river toward the land. Subsequently, the air subsides over the river. The result is a closed local air circulation cell in the vertical plane (Figure 1). At night, the land cools more rapidly, and the air circulation reverses because the river is warmer. Because these driving forces combine with different scales of atmospheric flows of trade winds and local topography, the combined river winds remain elusive and difficult to understand and characterize.

Figure 1 Conceptual representation of thermally driven recirculatory flow of river winds and potential impacts on the dispersion of urban pollution over the river-city landscape and river-forest landscape.

Some of the world’s longest and widest rivers, such as the Amazon, Negro, and Tapajos rivers, are in the Amazon basin, and they have strong contrast between the dry and wet seasons. For example, rivers can be of 5 km width in the dry season and river seas of 100 km width can be observed in some places in the wet season of Amazonia. However, how local air circulations induced by large water bodies influence the hydrological cycles and pollution dispersion in the Amazon region remains inadequately understood.

Traditional meteorology and pollution measurement platforms like aircraft and flux tower are unable to observe vertical profiles in the low atmosphere over rivers, hindering a comprehensive understanding of the characteristics and impacts of river winds in Amazonia. Medium-sized unmanned aerial vehicles (UAV) have emerged as a potential advance in atmospheric studies due to extreme maneuverability in collecting data at high horizontal and vertical resolutions (i.e., 1 to 10’s of meters). Our group previously utilized the UAV-enabled chemical sensing and sampling techniques to tackle scientific unknowns related to the emissions of volatile and semi-volatile organic compounds over the Amazon tropical forest1-3 and to investigate nighttime boundary dynamics in urban region of Amazonia4, 5. In the latest results reported now, sensor-equipped UAVs were used to collect in situ vertical information of meteorological and chemical data in the lower atmosphere during the daytime over the Rio Negro river in the central Amazon. The impacts of atmospheric recirculation tied to the river winds on the air quality of nearby human populations were considered.

Wind profiles over the river are influenced by factors such as synoptic-scale advection, convection, and local air circulations. Quantifying the contribution of each influential factor to the observed wind pattern is therefore challenging. In this study, an unsupervised clustering algorithm was applied to the vertical wind profiles to reveal the underlying patterns. Four characteristic wind clusters were identified for the Amazonia river regimes (Figure 2). For example, cluster 1, representing 23% of the total observations, was associated with strong river winds over a river-forest landscape. Wind profiles in this cluster were featured with a complete reversal of wind direction at mid-height (Figure 2). The other three clusters were associated with different weather conditions, where the river winds were paled from the observations.

River winds can significantly alter the dispersion and vertical distribution of air pollution. In the presence of river winds (i.e., flights in cluster 1), changes in wind direction at mid-altitudes over the river usually accompanied by increases in the pollution concentrations. Polluted air from the land source (e.g., urban industrial region) was transported from the surface to the branch of upward convection in the circulation cell, and this pollution then descended over the river to the downward branch of the cell, enhancing pollutant concentration over the river, as depicted in Figure 1. Interestingly, for Ox (º O3 + NO2) the concentration decreased and then recovered at mid-altitudes for cluster 1. Previous literature demonstrated significant dry deposition of O3 to the forest canopy. The local air circulation uplifted the Ox-depleted air from the nearby forest, and diluted Ox concentrations at the altitude where the sub-cell descended over the river. This unique feature of the vertical distribution of Ox further served as evidence for the presence of local air recirculation such as river winds over river-forest landscape.

In addition, this study includes a modeling component to couple field observations of river winds and chemistry with fine-scale modeling analyses using a large eddy simulation. The LES simulations examined the effects of river winds on air pollution dispersion. In contrast to meso- and global-scale models where river winds are partly treated as sub-grid scale processes, the LES simulation explicitly reproduces the turbulence and atmospheric circulations of the Amazon river winds. The simulations captured the main features of river winds observed by UAV sensing. The three main branches depicted in Figure 1 were accurately reproduced by the simulation. The pollution emitted from the land was carried upward in the river wind sub-cell, mixed toward the middle of the river, and recirculated back to the nearby land surface (Figure 3).

Figure 3 Large eddy simulations for river winds and their impacts on pollution dispersion. CO was used as a proxy for the point-source air pollution emitted from the riparian area.

What these observations of river winds have in common is a "pot with a lid on a stove". The lid is some joining of local winds with local topography so that air is not cleaned out. The stove is the emissions of pollutants by the population. The pot is the air mass that people live in and that is not cleaned out by winds. Within that pot, "cooking" can also occur, e.g., photochemical production of pollutants like ozone in Los Angeles under the summer sun. The implication of this study is that air recirculation induced by river winds slows the dispersion of air pollution, changes the spatial distribution and chemistry of air pollutants, and may increase the risk of human exposure to air pollution in the riparian region. Our findings emphasize the need to understand the impacts of river winds on air pollution and highlight that air pollution management strategies and policies in Amazonia should incorporate the effects of river winds for effective pollution mitigation and control.

This work involved important international collaborations among researchers at Harvard University, Amazonas State University, National Taiwan University, Wageningen University & Research, and University of California at Irvine. More details of the paper can be found at https://www.nature.com/articles/s43247-021-00277-6 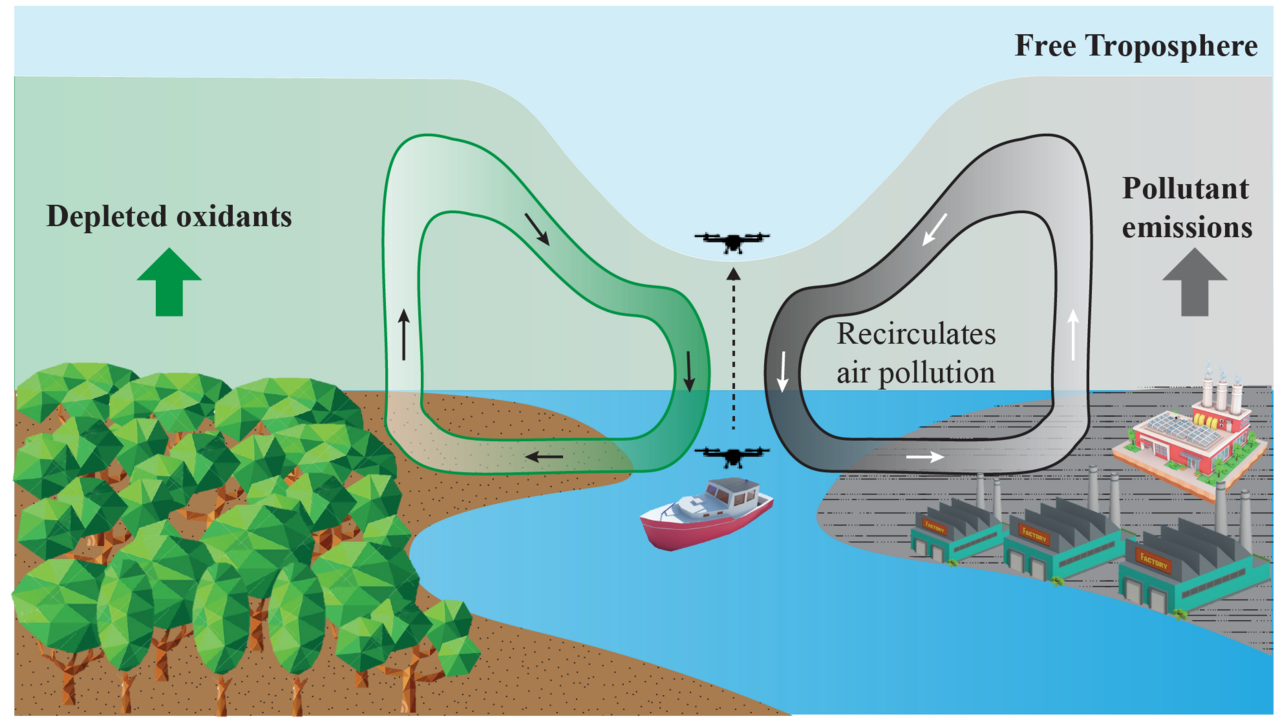