We report a new, practical material for the decontamination of sulfur mustard. In the process of developing this catalyst, we uncovered an unforeseen way in which copper enhances the activity of the system.

The development of catalysts for the decontamination of chemical warfare agents, such as sulfur mustard (HD), more commonly known as “mustard gas,” have very clear and practical implications: these materials can save lives and prevent horrific injury.  There has therefore been a large amount of interest and research toward developing such materials which can be incorporated into protective garments or respiratory filtration media.  In our paper [10.1038/s42004-021-00465-7] we report a solid catalytic material that is able to oxidize HD in the presence of air simply upon coming into contact with the agent, without any added solvents or chemical oxidants.  Our ability to address aspects of the reaction mechanism, conduct studies with live agent HD, and examine this system at the gas solid interface, a feature critical for real-world implementation of this catalytic material, was only made possible through the collaborative efforts of four different institutions: Emory University, Stony Brook University, Brookhaven National Laboratory, and the US Army Combat Capabilities Command.  This diverse group worked to demonstrate the practical value of this discovery which we hope will contribute to the development of new protective materials.

In addition to the practical implications of this work, I would like to highlight here the unexpected role of copper in this system, that as a researcher, I found to be one of the most exciting and intriguing aspects.  In short (for greater detail see our main article), the addition of copper to our catalytic system significantly increases the rate of decontamination.  This involves the oxidation of sulfur mustard, a sulfide, to the corresponding sulfoxide, which is significantly less toxic.  Our catalyst is composed of tribromide, nitrate, and copper salts along with Nafion, a solid acid polymer.  Solution studies in acetonitrile have previously demonstrated that a mixture of tribromide and nitrate salts catalyze this reaction in the presence of oxygen.  Upon adding copper to this system, we observed a fourfold increase in oxidation rate and a dramatic color change from yellow to dark green (Fig. 1).  We were also able to demonstrate, with the proper formulation, that this reaction could proceed in the absence of additional solvent.  At this point we were excited by the performance of our catalytic material, but we were still left wondering, what is the role of copper in this system?

Fig. 1 Color change of the catalytic solution in acetonitrile before (left) and after (right) the addition of CEES.

Even in the absence of copper, the mechanism of sulfoxidation catalyzed by tribromide and nitrate is a complex system that involves a myriad of NOx and Brx species.  One key aspect of the reaction that is agreed upon is the presence of a bromosulfonium intermediate (R2S+Br), which goes on to form the decontaminated sulfoxide.  This intermediate forms in the reversible reaction between bromine (formed upon dissolution of tribromide) and the toxic sulfide, in our case the HD simulant 2-chloroethyl ethyl sulfide (CEES) as shown in Eq. 1.

Our initial thought was that copper must be increasing the rate of one of the reactions involved with either the formation or conversion of the bromosulfonium intermediate, or the regeneration of one of the catalytic components such as bromine or nitrate. However, we did not find evidence of either.  Then, in a separate experiment attempting to address another aspect of the mechanism, we found our answer.

The reaction between bromine and CEES exhibits a water dependence; in the presence of water, bromine is consumed at a greater rate.  This reaction is often reported as an equilibrium, and we were curious if we could explore the reversibility of this reaction by adding and removing water.  Upon removing water from the system using the desiccant MgSO4, we saw the reformation of Br2 indicating that it is indeed an equilibrium reaction.  To our knowledge, this was the first observation of the truly reversible nature of equation 1.  Based on this observation, we wondered if perhaps copper could have a similar effect in shifting the equilibrium in favor of the bromosulfonium intermediate.

To our gratification, this was indeed the case.  Copper is well known to form complexes with bromide ions in acetonitrile. Upon addition of CEES to our catalytic mixture, the liberated bromide ions formed in Eq 1 were rapidly complexed by copper.  This was visually observed as the change in the reaction solution from yellow to deep green seen in Fig. 1.  By lowering the concentration of free bromide ions, copper effectively decreases the likelihood of the reverse reaction in Eq 1.  As explained in greater detail in our main article, what makes copper unique is that it can create this equilibrium shift in favor of the bromosulfonium intermediate without interfering with other aspects of the catalytic cycle.

For an experimental scientist like myself, unexpected results such as these are some of the most rewarding.  They not only reinforce the importance of conducting experiments, but they open up new lines of inquiry as well.  For example, where else can this type of equilibrium shift be leveraged to catalyze reactions?  We hope that this work will not only provide practical value as a decontamination material, but that the fundamental insights on the role of copper will contribute to new research directions.

Living polyaramids with a twist 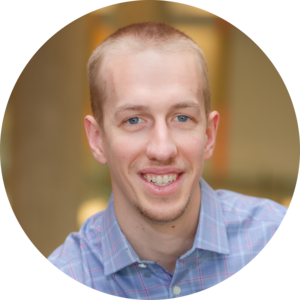