Investigating how conducting polymers interact with a variety of anions in aqueous solution has uncovered these polymers (under certain conditions) react with water.

Conducting polymers are an interesting class of materials - bringing together mechanical properties akin to polymers, with electrical and optical properties comparable to semiconductors and metals.  Since their discovery in the late 1970s (check out the Nobel prize in Chemistry from 2000),[1] there has been increasing fundamental and applied interest in these materials.

One aspect of these materials that is used on a regular basis is the fact that their properties can be tuned/modified through a doping process.  This process involves inserting or removing counterions from within the conducting polymer layer.  These counterions allow for removal or insertion of electrons from the backbone of the conducting polymer, thus creating/removing charge carriers.  Rather than the simple hypothesis that inserting a counterion, say an anion, with a charge of -1 results in a charge on the polymer of +1 - recent research has shown that the nature/type of counterion plays a critical role in defining the properties of the resulting doped conducting polymer.  For example, an international collaborative research project (involving my team) in 2014 showed the prototypical conducting polymer known as PEDOT could be switched between semiconducting and semi-metallic by changing the anion inserted into the PEDOT film.[2] This provided motivation for us, and many other researches around the globe, to explore this in more detail.  In 2017 our team made the discovery of what appeared to be some form of specific ion effects related to the way PEDOT interacts with nitrate in water.[3] The interesting thing in that study was the concentration ranges for the anions in solution overlapped with the range for ions in water in agriculture.  Like many research groups around the world, we were ultimately motivated to explore conducting polymers as active materials for sensing ions.[4]

With this in mind, in this current study we set out to systematically investigate the interaction of PEDOT with a range of anions in water - at concentrations relevant to applications in agriculture, drinking water, etc.  The original intention was to understand how the shape, valence, size, etc of the anions contributed to the way they doped (or not) the conducting polymer.  While the doping process leads to increasing charge carriers (increased electrical conductivity, greater visible optical transparency, etc), it became obvious that certain anions weren't doping the PEDOT. In fact, we interpret the change in PEDOT properties as the loss of charge carriers (lower electrical conductivity, greater visible optical absorption).  It wasn't until a detailed chemical analysis was done that we realised that the PEDOT was being hydrolysed - as in, reacting with water.  And this behaviour was not directly attributed to the pH of the solution, but the nature/type of anion in solution.  Hence, we concluded that a group of anions exist that facilitates the reaction of the conducting polymer with water. The outcome is a hydrolysed polymer that has lost many, or most, of its charge carriers.  Under certain conditions the charge carriers can be recovered, and the polymer returned to its conductive form.

This new knowledge has importance for any scenario where a conducting polymer is exposed to a salty water environment. Many organic electronic sensors being developed for use in biology, agriculture, and beyond place conducting polymers into contact with salty water. Avoiding the (what appears to be) undesirable hydrolysis of the conducting polymer will ensure these new sensors have the robustness and stability for long-term use in commercial devices. 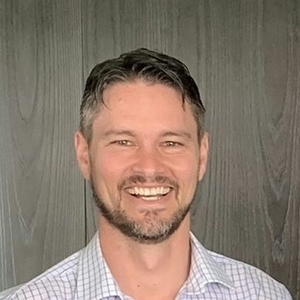 My expertise is enhancing the performance and manufacturability of coatings. I undertake fundamental studies of electrical, optical, mechanical materials (and combinations thereof), and partner with businesses to create new products. Specifically exploring things such as nanostructure, charge transport, optical absorption, electrochromics, and specific ion effects, to integrate them into products for biomedical, agriculture, automotive, energy storage, and defence.
Follow