Organic semiconductors (OSCs) demonstrate great promises as candidates for next-generation flexible and lightweight electronics1. Electronic applications such as the logic-circuits and radio-frequency identifiers require high-performance hole-and electron-transporting OSCs (p- and n-type, respectively) for their design and constructions. While state-of-the-art p-type OSCs have achieved adequately high charge-carrier mobilities (µ), the n-type counterparts have not demonstrated matching µ with p-type OSCs to truly realize these high-end electronics. From a scientific point of view, the lack of high-performance n-type OSCs also impedes our understanding of their charge-transport properties.

While organic materials chemists are exceptional in fine-tuning intramolecular features such as HOMO/LUMO energy levels and their distributions, designing intermolecular features is not a walk in the park. We oftentimes have to go through a painful process of synthesis, purifications, growing single crystals, analyze them by X-ray diffractions to eventually see whether our initial design concept was valid or not. Therefore, the design of crystal packing structures that demonstrates n-type isotropic charge transport is, by all means, a challenging task for us chemists (but it does make a fantastic research project).

Our research group has developed an air-stable high-performance PhC2–BQQDI4 n-type OSC in 2020 that exhibits an outstanding µ of 3.0 cm2 V-1 s-1 (Figure 2). The excellent OSC performance of PhC2–BQQDI is attributed to the large transfer integrals within a 2D brickwork-type packing structure and its intermolecular hydrogen-bonding interactions along other favorable intermolecular interactions provide resilience to molecular fluctuations. Despite these promising results, PhC2–BQQDI forms anisotropic transfer integrals caused by the misaligned molecules in the π-π stacking directions. We then started contemplating how to achieve isotropic charge transport using the BQQDI π-core, and we believed that we could achieve this goal if we were able to force the alignment of the molecules π-π stacking directions. 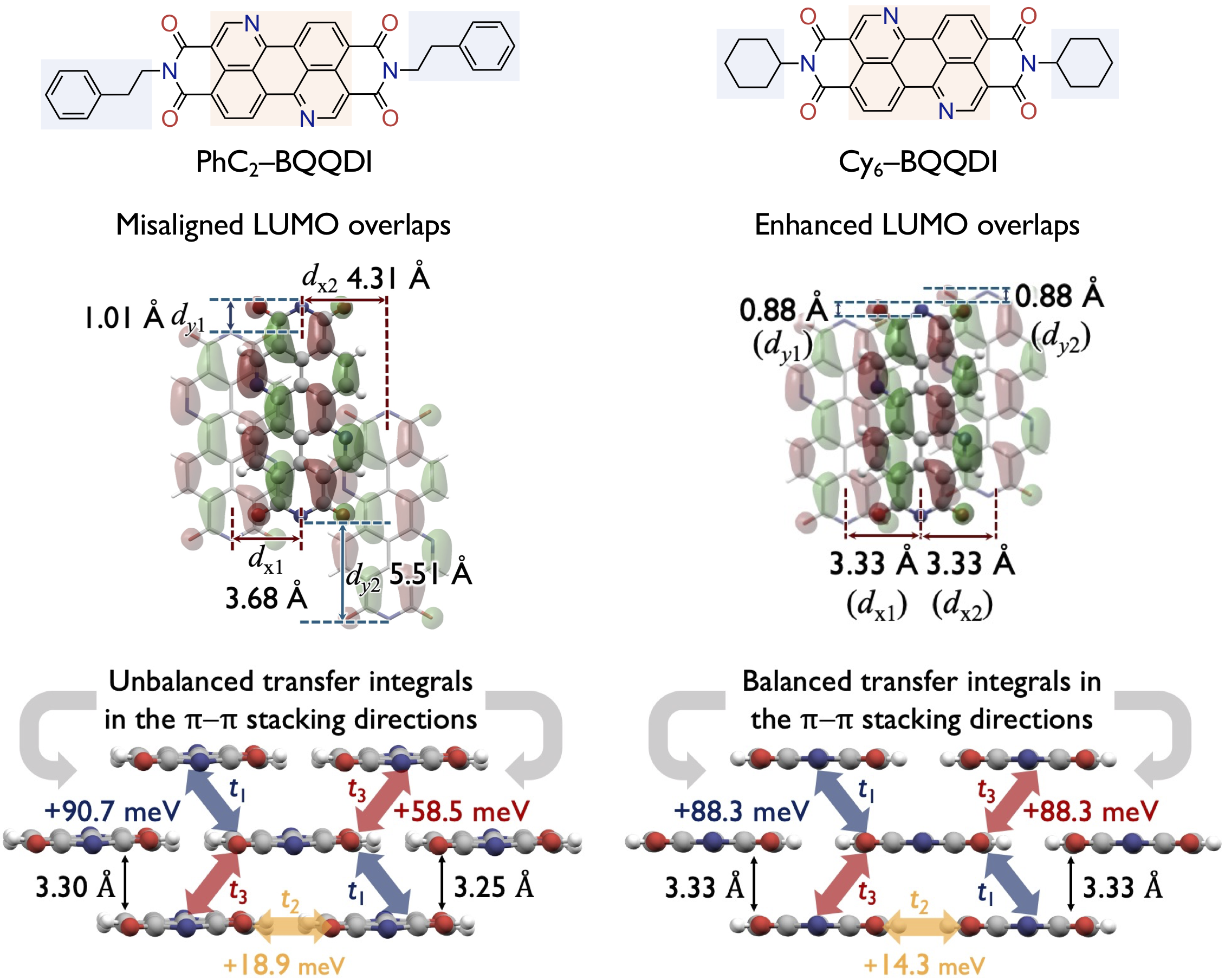 In this work, we employed somewhat bulky substituents such as phenyl and cyclohexyl on the BQQDI π-core (Ph– and  Cy6–BQQDI) and investigated their charge transports. While Ph–BQQDI shows similar anisotropic charge transport as PhC2–BQQDI, the cyclohexyl substituents successfully forced the molecular alignment in the π-π stacking directions of Cy6–BQQDI in a near-ideal 2D brickwork packing structure (Figure 2). Cy6–BQQDI also demonstrates equal transfer integrals in both π-π stacking directions and this isotropic charge transport indeed contributes to its strong resilience to molecular fluctuations compared to derivatives like Ph– and PhC2–BQQDI. The solution-processed single-crystalline thin films of Cy6–BQQDI achieved a high µ of 2.3 cm2 V-1 s-1 and its vacuum-deposited polycrystalline devices also exhibit a high µ of 1.0 cm2 V-1 s-1. Cy6–BQQDI also demonstrated high µ ranged from 1.5–2.0 cm2 V-1 s-1 at various angles of the single-crystalline thin films, which confirmed its isotropic charge transport.

Here is an awesome photo of the Takeya Lab family.

Let's plug in and stimulate networking! 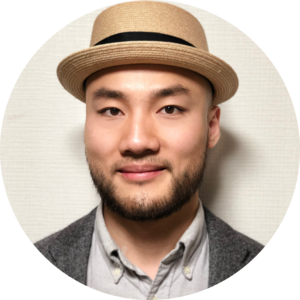 PhD, The University of Tokyo

My research involves the design and synthesis of organic semiconductors and the investigation of their charge-transport properties.