The nitrogenase FeMo-cofactor is chelated by homocitrate, but the protonation state of this key ligand is debated. Here vibrational circular dichroism studies of the extracted cofactor suggest that it is protonated.

The earth's atmosphere comprises 78% of dinitrogen, while this abundant source is effectively inert and only be used for bio-utilization following conversion to a usable form like ammonia. In nature, this ability to fix nitrogen is restricted to some diminutive but multitudinous group of diazotrophic microorganisms of nitrogenase.

The active site of FeMo-cofactor (FeMo-co) in nitrogenase has been widely studied and clarified as Δ-Mo*Fe7S9C[R-(H)homocit*](cys)(Hhis) (H4homocit = homocitric acid, Hcys = cysteine, Hhis = histidine) for the efforts of nearly 30 years. Besides some debate on the valence states of metals, ≡C−O(H) coordination with molybdenum of chelated R-homocitrate is controversial. It has been suggested that proton of the hydroxy group may be important during substrate reduction.

Because the exact protonated crystal structure has not been obtained, most of explorations remain in the comparison of protein structure with model compounds and theoretical calculations. Direct experimental evidence is difficult in view of protons are almost always invisible in the limited-resolutions of crystal structures. Therefore, experimental direction is relatively challenging.

Fortuitously, considering the R-configuration of homocitrate with Δ-chiral center of molybdenum in FeMo-co, vibrational circular dichroism (VCD) spectroscopy, a relatively practical method for the chiral properties of molecules, is used for the determination of protonated structure around chiral carbon and metal of homocitrate in infrared region.

We have successfully obtained the VCD spectrum of N-methyl formamide extracted FeMo-co, which may be attributed to the synergistic effect of double chiralities. In the next work, deprotonated molybdenum(VI) R-homocitrate K5[Λ,Λ,Λ,Λ-Mo*4O11(R-Hhomocit*)2]Cl∙5H2O was acquired purposely.

Recently, we finally obtained a pair of enantiomers of protonated molybdenum(V) R,S-lactates [Δ/Λ-Mo*2O2(μ2-S)(μ2-O)(R-Hlact*)2(trz)2(trz)]∙½H2O (R, 1; S, 2) (H2lact = lactic acid, trz = 1,2,4-triazole). 1 and 2 were served as model compounds for VCD assignments of local chelated environment of molybdenum R-homocitrate in FeMo-co, together with deprotonated molybdenum(VI) R,S-lactate and R-homocitrate. The vibrations of ≡C−O(H) ranged 1100 ~ 1000 cm-1 are served as the typical features for the protonated and deprotonated states of lactates/homocitrates.

By comparing ν(C−OH) and ν(C−O) of VCD characteristic bands in R-lactates, we conclude that ν(C−OH) will shift from high wave number to low wave number, namely red-shift, when lactates undergo protonated coordination. The same result should also occur in the homolog of homocitrate. Fortunately, we have found the same pattern in R-homocitrate. In order to prove the accuracy of peaks identification, density functional theory (DFT) calculations were carried out subsequently.

Therefore, protonation is happened at α-alkoxy group of R-homocitrate in NMF-extracted FeMo-co. This is further extended to the protonation of FeMo-co in Mo-nitrogenase at resting state. To the best of our knowledge, this is the first experimental report for the protonation assignment of FeMo-co using VCD spectra, opening up an interesting direction for the investigation of the chiral molecule in biological system. 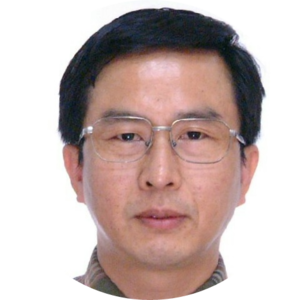