+1
Longwu Ye and 1 other View all
Prof., Xiamen University
Follow

Our group has been focusing on ynamide chemistry for synthesizing various valuable N-containing heterocycles. Based on different strategies such as oxidation, amination and cycloisomerization, we realized a series of novel  transformations of ynamides via catalysis of metals such as Au, Pt, Cu, Zn, Y etc.[1] Furthermore, we considered the possibility of exploring a new catalytic mode by employing Brønsted acids instead of those transition metals to activate ynamides. Although some pioneering work of our group in this area have been published,[2−4] a number of challenges are still remained, especially the asymmetric synthesis with high efficiency and enantioselectivity. 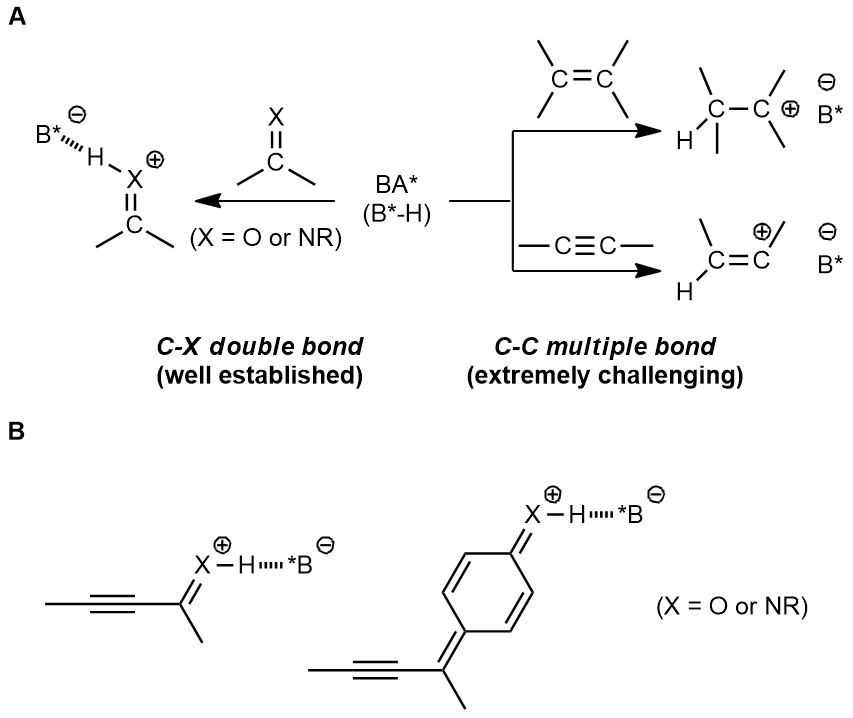 We herein report that chiral Brønsted acid enable the catalytic asymmetric dearomatization (CADA) reactions of naphthol-, phenol- and pyrrole-ynamides by direct activation of ynamides, which represents the first chiral Brønsted acid catalysis via the direct activation of carbon–carbon triple bonds (Fig. C). At the beginning, naphthol-ynamide substrates were designed and employed for the optimization of CADA reaction. Gratifyingly, with the chiral Brønsted acid bearing a skeleton of BINAP, we could realized the practical and atom-economical synthesis of a wide range of valuable spirocyclic enones with a chiral quaternary carbon stereocenter in generally high yields with excellent enantioselectivities (up to 99:1 e.r.). Furthermore, we subsequently synthesized the ortho-substituted phenol-ynamides, which are more challenging to be dearomatized because of the relatively stronger aromaticity of phenols. To our delight, through the extensive optimization, the corresponding spirocyclic products could be obtained with satisfying results (up to 99:1 e.r.) and the seven-membered byproduct led by O-cyclization could be perfectly inhibited. What’s more, the substrate scope could be further extended to pyrrole-ynamides, furnishing valuable chiral spirocyclic 2H-pyrroles in good to excellent yields with high enantioselectivities (up to 98:2 e.r.). Significantly, excellent E/Z ratios (>20:1) were detected in these cases. 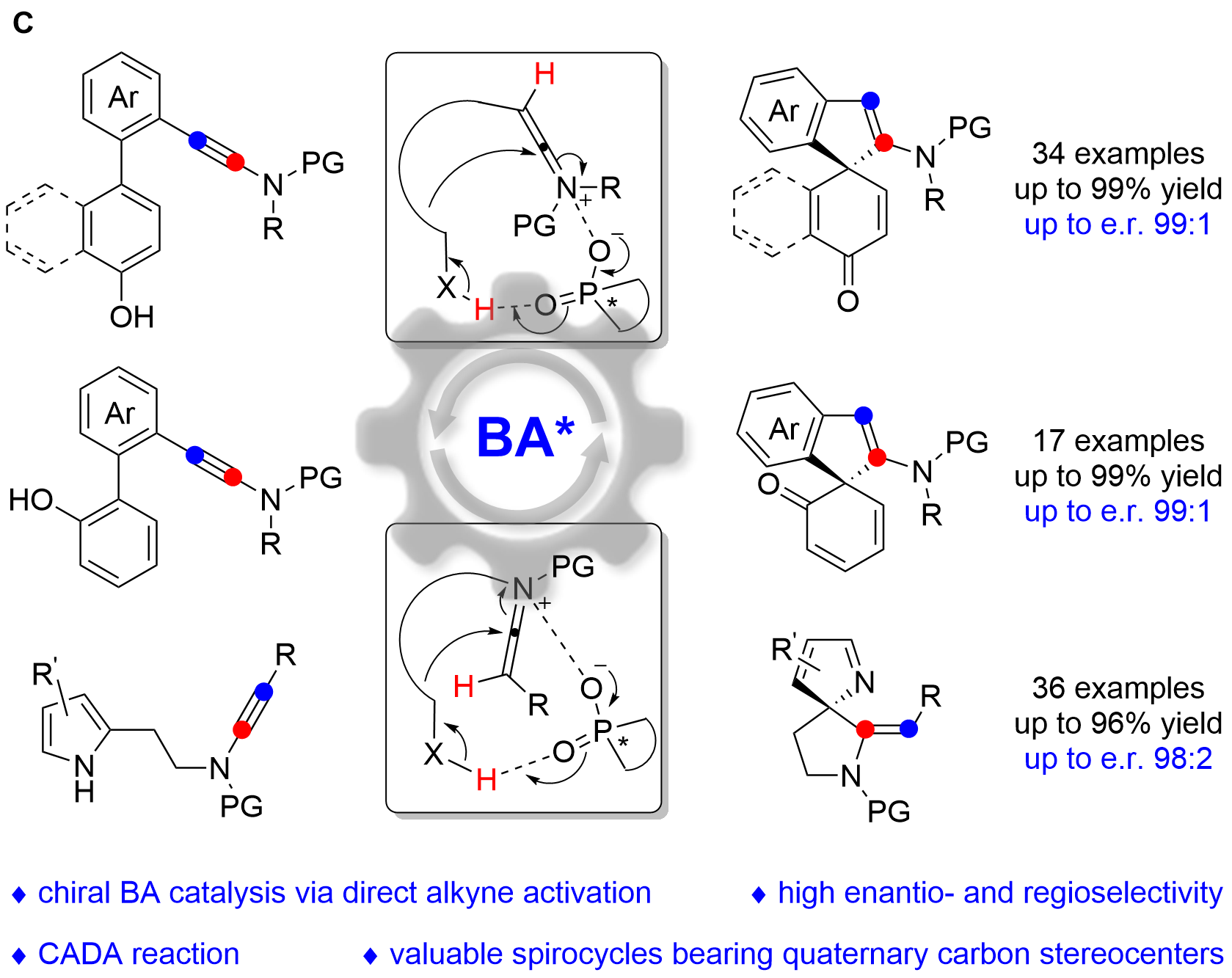 Density functional theory (DFT) calculations based on pyrrole-ynamide substrate were also carried out. The results indicated that a rapid and reversible protonation process of substrate leads to a keteniminium intermediate, attaching to chiral catalyst with both hydrogen bonding and ion pair interactions. The further nucleophilic attack of pyrrole ring with the irreversible formation of C-C bond was identified as the rate- and enantioselectivity-determining step, affording the corresponding product and releasing the catalyst (Fig. D). 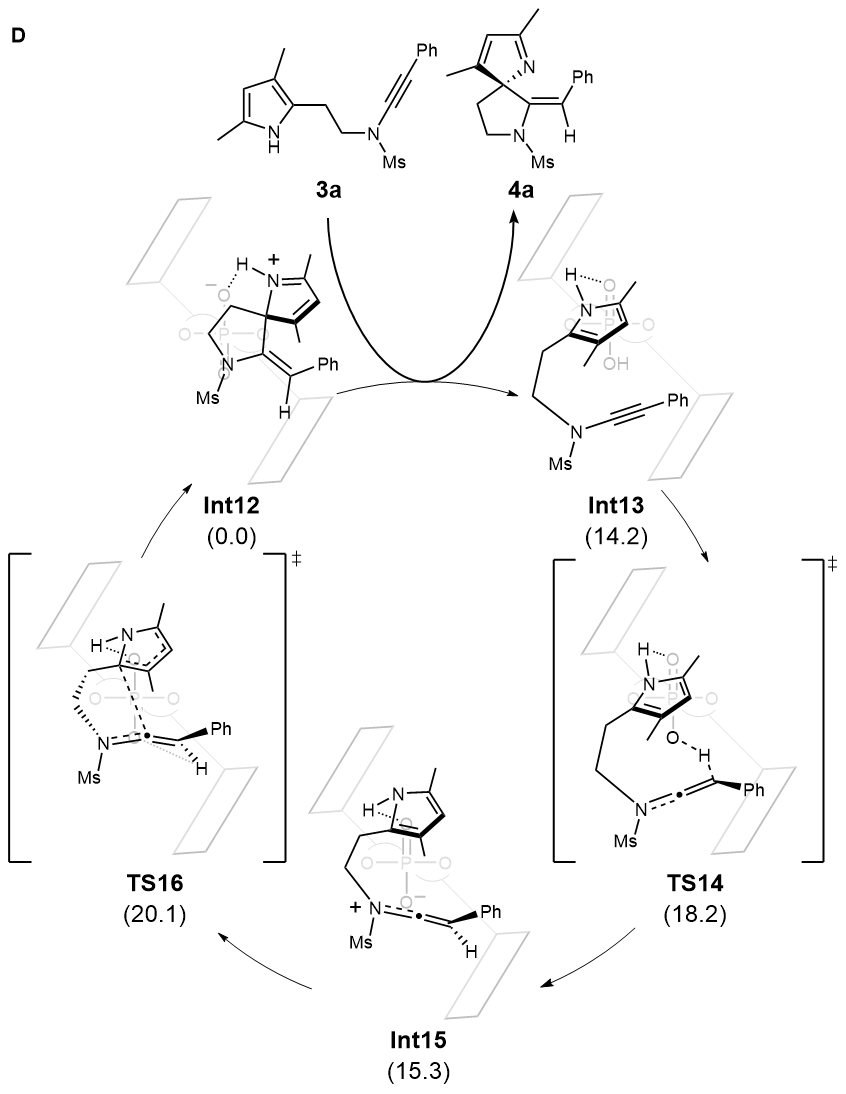