Vicinal dicarbofunctionalization (DCF) reactions of alkenes have been extensively explored in ionic chemistry but the enantioselective radical mediated version of DCF remains largely unexplored. Here, the authors demonstrate a radical vicinal DCF reaction of olefins by merging of radical addition an…

Alkenes are arguably one of the most privileged and versatile chemicals in organic synthesis because a diverse range of functional groups could be readily introduced across the C=C π system by many classic vicinal difunctionalization reactions. In this context, one of the most investigated and fundamental transformations is the intermolecular three-component alkene vicinal dicarbofunctionalization (DCF) reaction, which allows installation of two different carbon fragments. In general, these reactions have been extensively explored in ionic chemistry, while the enantioseletive radical-mediated versions of DCF reactions remain challenging and largely unexplored, due to the intrinsically high reactivity and instability of radical intermediates. Herein, we report an intermolecular, enantioselective three-component radical vicinal DCF reaction of olefins using photoredox and copper dual catalysisenabled by merger of radical addition and cross-coupling. Advantages associated with this reaction include the high functional group tolerance, broad scope of C-radical precursors and excellent chemo- and enantioselectivity.

Our story about iminyl radical chemistry began from 2018. We revealed that iminyl radicals, derived from O-acyl cycloalkanone oxime esters, can undergo facile ring-opening C−C bond cleavage to give cyanoalkyl carbon radicals under single-electron transfer (SET) reduction. Such radicals can participate in a variety of C−C bond-forming reactions successfully to allow the synthesis of diverse distantly functionalized alkyl nitriles. In addition, we also developed a wide variety of visible-light-driven copper-catalyzed radical cross-coupling reactions of cyanoalkyl carbon radicals.

We quickly finished the optimization of the reaction conditions by a careful screening of solvents, equivalents of substrates, catalyst amount, concentrations and so on. During this process, several side products were also involved, which might result from acyl radical mediated two-component cross-coupling with alkenes or TMSCN, or its own dimerization. With the optimized reaction conditions established, a range of styrene derivatives with electron-donating (e.g., Me, tBu, Ph) or electron-withdrawing (e.g., F, Cl, Br, OAc, Bpin) functional groups are well tolerated, furnishing the corresponding products in good yields and stereoselectivity. Remarkably, this protocol can also be successfully extended to biologically relevant molecule and pharmaceutical-derived styrene analogues. These results suggest the current protocol should be of potential use for late-stage structural modification of drug and complex compounds.

Besides that, a representative set of oxime esters, bearing a variety of functional groups underwent the reaction successfully, which can be easily prepared in two steps from the relevant ketone precursors. The utility and scope of this reaction were further exemplified in the combination of cycloketone-derived oxime esters, alkenes, and TMSCN. To establish the potential viability of our method in the construction of valuable skeletons, diverse further transformations were performed with the chiral β-cyano ketones and alkyldinitriles, which could be easily converted to chiral amides, aliphatic amine, and esters.

In our Nature Communication work, a new strategy for three-component radical vicinal DCF reaction of alkeneusing oxime esters and TMSCN by dual photoredox and copper catalysis with high enantioselectivity has been developed. This three-component reaction proceeds under mild conditions, and demonstrates broad substrate scope and high functional group tolerance, providing a general approach to optically active β–cyano ketones and alkyldinitriles. 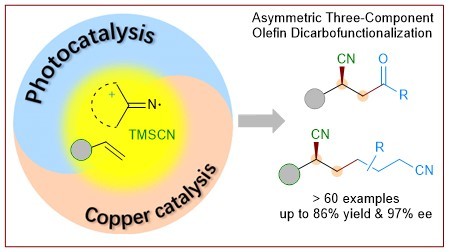