Methane, CH4, is the hydrocarbon that has the highest energy content per kilogram of carbon. Traditional reserves of methane include natural gas, shale gas, coalbed gas, methane hydrate, etc. The recognition of methane as a potent greenhouse gas is also leading to efforts to utilize the resource available from more sustainable sources, such as anerobic digesters which produce methane from a variety of waste streams. Both the traditional sources and the generation of methane as part of pollution remediation are by their nature distributed geographically. Accordingly, transforming methane to transportable oxygenates (methanol, formic acid, acetic acid, etc.) on site is important for efficient methane utilization.  However, the strong C-H bond in methane necessaries harsh condition (high temperature and pressure) to split hydrogen atom from methane, the first step for conversion of methane to new chemicals. More importantly, the desired oxygenates products are often more easily over-transformed into byproducts (eg., CO2) than methane. Therefore, the methane conversion is one of the ‘‘holy grail’’ reactions in catalysis. Indirect process, reforming methane to syngas (CO and H2), then Fischer-Tropsch (FT) synthesis to chemicals and fuels is currently applied in industry for methane conversion, which suffers from intensive energy consumption. Seeking promising route capable of directly converting methane at mild condition has attracted great attention from both academia and industry.

Partial oxidation of methane to chemicals is regarded as the dream reaction. It was found that methane can be readily activated in concentrated sulfuric acid solution containing Hg+, Pt2+ and Pd2+ cations, producing methyl bisulfate then stepwise hydrolysis to methanol. However the use of strong liquid acid limits its practical application.[1, 2] In the past decades, environmentally friendly catalyst especially metal (Fe, Cu and Zn) modified zeolites have been attempted for partial methane oxidation into methanol with O2, N2O or H2O as the oxidant.[3-5] Due to the stoichiometric properties and inefficient chemical looping, those processes are not apt to be performed in a continuous process.

Gold (Au), one of the most stable metals, has been used as a material for coins and ornaments over thousands of years. It was historically assumed to be chemically unreactive in catalysis until two independent discoveries were reported in the 1980s. Hutchings[6] found that gold catalysts can catalyze the hydrochlorination of acetylene producing vinyl chloride monomer and Haruta[7] reported that gold nano-particles have high catalytic activity for low temperature CO oxidation. Since then, there has been rapid development on the synthesis of Au and Au containing catalysts and a continuous discovery of new catalysis applications including various oxidation and hydrogenation[8].

Intrigued by the fascinating property of Au catalyst, we determined to make novel Au catalyst for methane conversion. In 2019, an international team was assembled between Innovation Academy for Precision Measurement Science and Technology, CAS (Prof. Jun Xu) and Cardiff University (Prof. Graham Hutchings). Our aim is to achieve selective methane conversion to oxygenates using oxygen as oxidant over solid catalyst. Our thought is to combine the unparalleled catalytic oxidation activity of Au with strong acidic environment on catalyst. To this end, we chose acidic zeolite to provide the acidic sites and nano-particulate Au as the oxidation center. Au supported ZSM-5 (Au/ZSM-5) catalysts were prepared. We are lucky on our design. This catalyst enables CH4 oxidation with O2 at 120-240 °C in aqueous solution, achieving selective production of methanol and acetic acid. The maximum oxygenate productivity of 7.3 mol/molAu/h is obtained at short reaction times; the productivity can remain at 1.9 mol/molAu/h even after 1 hour of reaction. Methane conversion can reach 4.6 % when the reaction is performed at lower methane partial pressure using synthetic air as the oxidant. Compared with the Cu-zeolite catalysts on which only C1 products can be produced, the formation of C2 oxygenates as major products on the Au-ZSM-5 catalyst demonstrates a different mechanism on our Au catalyst which involves surface bound intermediates rather than species in the fluid phase. Importantly, only O2 is employed on our Au/ZSM-5 to produce C2 oxygenates. This is different from other noble metals modified zeolites catalysts, such as Rh and Ir, on which the CO co-reactant is indispensable[9, 10].

This work presents a proof-of-concept study on catalytic methane conversions on heterogeneous catalyst using oxygen oxidant. It will enrich our knowledge on the development of improved catalyst for this dream reaction. More details of this work could be found here: “Au/ZSM-5 catalyses the selective oxidation of CH4 to CH3OH and CH3COOH using O2” in Nature Catalysis (https://doi.org/10.1038/s41929-021-00725-8).

The Interesting Things Base Metals Do When Illuminated 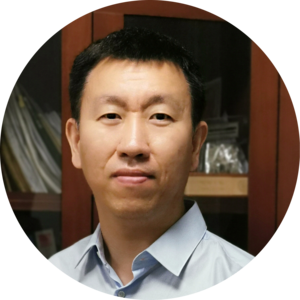