Although strategies for the automated assembly of compounds of pharmaceutical relevance is a growing field of research, the synthesis of small-molecule pharmacophores remains a predominantly manual process. Now, an automated six-step synthesis of prexasertib is achieved by multistep solid-phase chem…

Traditional chemical synthesis is labour-intensive and generates substantial waste due to repetitive reaction manipulation and downstream purification. The transition from cumbersome manual synthesis to automated assembly of pharmaceutical molecules has allowed improvements in efficiency, scalability, safety, reproducibility, time and cost reductions, and is therefore of widespread academic, industrial, and societal interests. However, apart from the well-defined automated synthesis methods for peptides, DNA, oligonucleotides, and oligosaccharides, in which the molecules are composed of repeating functional units, the synthesis of small-molecule-based active pharmaceutical ingredients (APIs) remains predominantly a manual process due to their structural diversity. This issue needs to be addressed because pharmaceutical molecules, which consist atoms arranged in myriad structures with specific properties, play essential roles in modern society.

Inspired by the well-established solid-phase peptide synthesis in a continuous flow fashion, as well as the pioneering work from Prof. Steven Ley using catch-release strategy in flow synthesis, we envisioned that by merging solid-phase synthesis and flow operation can overcome the limitations encountered in multistep flow synthesis (Figure 1). We have applied the SPS-flow technology to a streamlined, six-step automated synthesis of prexasertib, a cell cycle checkpoint kinase 1 and 2 inhibitor. To generate a computer based chemical recipe file (CRF) of a targeted molecule requires three stages of development: 1) solution-batch synthesis; 2) SPS-batch synthesis; and 3) automated SPS-flow synthesis. Prexasertib was obtained as a trifluoroacetic acid (TFA) salt in 65% isolated yield after 32 hours of continuous-flow cyclic execution, using a single column reactor filled with 2 grams of 2-chlorotrityl chloride resin. This study represents the first example of automated synthesis of small molecule drugs (as opposed to peptides, oligonucleotides, and oligosaccharides) by integration of SPS and continuous-flow synthesis. An analysis of the top 200 small-molecule pharmaceuticals (by retail sales in 2018), reveals that 73% of these pharmaceutical molecules can be potentially synthesized by SPS, underscoring the fact that the current SPS-flow strategy can cover an extremely large range of pharmaceuticals.

The most prominent advantage of SPS-flow synthesis is that it avoids the problem of reagent/solvent/byproduct incompatibility between synthetic steps, thus enabling automation of multistep synthesis with longer steps and compatible with a much wider range of reagents (e.g. the pyrophoric LDA reagent) and reaction patterns, thus significantly expand the accessible chemical space and scaffold diversity compared to previous automated syntheses. The established CRFs can be directly adopted or slightly modified for the automated synthesis of analogues from a lead compound, allowing both late- and early-stage diversification for molecule editing at will. We thus prepared a library of twenty-three prexasertib derivatives by changing only one step in the six-step CRF (Figure 1).

We anticipate that this technology can potentially make big impact for pharmaceutical compound development. In stark contrast to solution batch synthesis, the target molecules grow on the solid matrix in SPS-flow synthesis, and all purification is done by simple filtration before the target compound is cleaved off from the solid resin. This allows an extremely simple and compact platform capable of performing all kinds of synthetic methods. The synthesizer can fit within the area of a standard fume hood which can be reused for different targets. Reconstruction or reformatting of the system is not needed compared to other batch or continuous-flow systems. The generated computer-based CRF enables pharmaceutical production in response to sudden changes in need, such as in epidemic or pandemic instances of infectious outbreak. With a portable design, this technology can be used to expand low income countries’ access to medicine. Moreover, the generated CRF can be directly adopted or slightly modified for the automated synthesis of lead derivatives, enabling not only late-stage diversification, but also early-stage diversification, thus significantly speeding up the lead optimization process.

Finally, I would like to emphasize that the team work between chemists and engineers is the key to the success of this project. All team members worked really hard. We truly appreciate all the assistance and help received from experts, editors, reviewers, and friends. 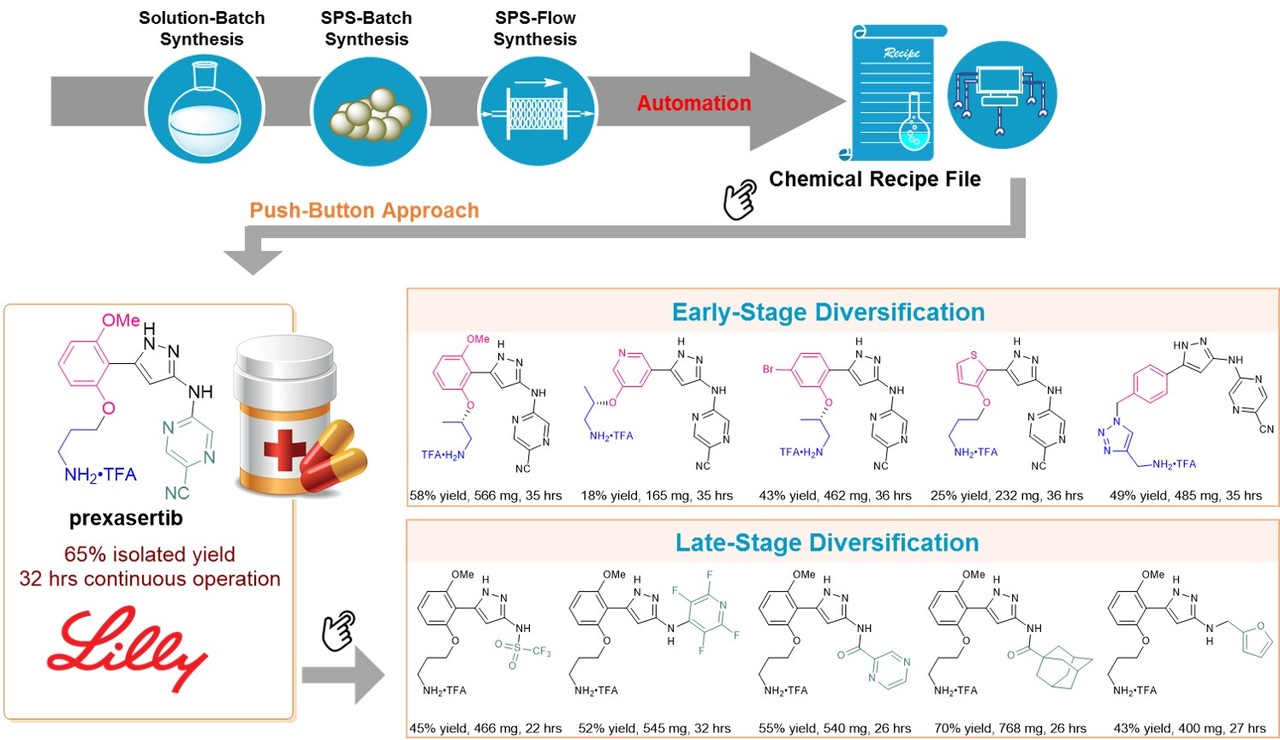