Organic semiconductors (based on carbon) are stable, non-toxic, and can be processed in a range of simple ways, while the variety of possible molecular designs is vast. This diversity offers new functionality that is difficult to achieve using traditional crystalline semiconductors (based on silicon or gallium), such as printing electronics on flexible substrates. Light-emitting diodes made of such organic semiconductors (OLEDs) power today’s smartphone and high-end television displays. OLEDs operate by injecting electrons and holes into emissive organic molecules to create radical anions and cations that, helped by the low dielectric constant of the organic material, readily combine to form excitons (coulombically-bound electron-hole pairs). The excitons have a total spin of either 0 (singlet) or 1 (triplet). Radiative recombination of spin-triplet excitons is spin-forbidden because the molecular ground state is spin-singlet. Unfortunately, spin-statistics dictate that 75% of excitons formed in an OLED are spin-triplet: this presents a significant problem for the luminescent efficiency of OLEDs.

However, ambient thermal energy alone is insufficient to ensure the triplet-to-singlet conversion outcompetes other triplet exciton loss pathways. An efficient spin-flipping mechanism is needed to convert the exciton’s spin state from triplet to singlet. Although optical spectroscopies can measure the rate of triplet-to-singlet conversion, they do not shed light on the critical spin-flipping mechanism. Our paper, now out in Nature Communications, uses a spin-sensitive technique to establish the spin-flipping mechanism, which has important implications for the design of future TADF emitters. For example, maximising the efficiency of the blue pixels in an OLED phone screen could more than double the phone’s battery life, because blue pixels require a higher driving voltage than green or red.

Molecular design | We started by synthesising a series of organic emitters following a typical donor-acceptor design strategy for TADF. Molecules comprising covalently linked electron-rich (‘donor’) and electron-deficient (‘acceptor’) moieties have a minimal overlap of their highest occupied and lowest unoccupied molecular orbitals (Figure 1a), which facilitates energetic proximity of the low-lying, charge-transfer-type singlet and triplet states (although often there is a still lower energy triplet excited state that can be regarded as a local excitation on either the donor or acceptor portion of the molecule. We also added a varying number of fluorine atoms to the sulfone acceptor to lower the charge-transfer-type singlet and triplet states. This lowering brought the charge-transfer type states closer in energy to the low-lying, local excitation triplet, which, in these molecules, is associated with the carbazole donor.

Photophysical studies | One method of quantifying the TADF efficiency of an emissive molecule is to compare the proportion of photoluminescence that is emitted promptly (on nanosecond timescales) versus delayed (on microsecond timescales). The prompt fluorescence corresponds to the direct, radiative recombination of the excitons originating in the singlet state, whereas delayed fluorescence is from excitons that have originated in, or cycled through, the triplet state before entering the singlet state, where they can radiatively recombine (Figure 1b). A smaller singlet-triplet energy gap enables more harvesting of the triplet excitons for emission, and hence the proportion of delayed fluorescence will increase with decreasing singlet-triplet energy gap.

We dissolved our emitters in an organic solvent and then used UV laser pulses to excite the solutions. A gated luminescence detector captured the whole photoluminescence spectrum, at 5 nanosecond intervals, as it reduced in intensity by 6 orders of magnitude over 10 microseconds. As expected, we found that the emitters with the smallest singlet-triplet energy gap had the highest proportion of delayed fluorescence. However, we were left wondering about the potential interaction between the two different triplet states, which we knew to be energetically close to one another in some of our emitters. The Monkman and Penfold groups have previously proposed that energetic proximity, and hence increased vibronic interaction, between low-lying charge-transfer-type and local excitation triplet states, enhances the rate of spin-flipping to the singlet state.2 This process, called the ‘spin-vibronic coupling’ mechanism, is widely accepted to drive TADF, yet has been concluded using indirect evidence from photophysical studies and theory. We realised that our series of ten emitters, in combination with our experience directly studying spin conversion mechanisms in other photoexcited organic molecules, would allow us to directly probe the role of spin-vibronic coupling in TADF.

Transient electron spin resonance | Different spin conversion mechanisms yield different distributions of electron spin density across a molecule. For a triplet exciton, this is reflected in the relative population of the x, y, z sublevels of the triplet state (where x, y, z are related to the molecular axes). In a transient electron spin resonance (trESR) experiment, pulsed laser excitation generates excitons in the singlet state, a small proportion of which spin-flip to the triplet state that we can then probe. A variable applied magnetic field induces Zeeman energy separation of the x, y, z triplet sublevels. A microwave source induces transitions between the triplet sublevels when resonant with the sublevel energetic spacing. The intensity of the sublevel transitions depends on the relative sublevel populations, which can therefore be determined from the pattern of microwave perturbations to reveal which of the different spin-flip mechanisms converted the singlet exciton to a triplet exciton. With microscopic reversibility, trESR can answer the question: What spin-flipping mechanism converts non-radiative triplet excitons to radiative singlet excitons in a TADF emitter? Figure 2a shows the trESR experimental configuration. Figure 2b depicts magnetically-induced Zeeman splitting and triplet sublevel transitions at resonant microwave energies.

In the trESR patterns recorded for some of our emitters, we observed the signature of one triplet exciton formed via ‘spin-orbit coupling’ involving only direct conversion between the singlet and triplet states, with no involvement of a vibronically interacting triplet. However, in most of the trESR patterns that we recorded, we observed an additional triplet exciton whose signature suggested it was populated via vibronic coupling with the initially formed triplet exciton. We were surprised to observe two distinct triplet excitons, which are rarely seen in trESR as most systems do not have two triplet states in energetic proximity. Assessing the trESR results from all ten emitters, it became clear that as the energy separation between the local excitation triplet and charge-transfer-type triplet decreased, the spin-flip mechanism changed from a direct, singlet-triplet spin-orbit coupling to a singlet-triplet spin-vibronic coupling involving an intermediate triplet state.

Our solution-based studies of a series of chemically modified TADF emitters revealed the importance of multiple, distinct, low-lying triplet states and that the spin-vibronic mechanism is the dominant spin-flipping mechanism. Understanding the interplay between molecular design and spin interactions for efficient spin interconversion is integral for the rational design of new TADF emitters and we demonstrated how trESR is a critical tool for establishing these structure-function relationships. Looking forwards, we are excited to expand trESR studies to study the spin-physical mechanisms for other organic emitters designed with new and unusual triplet management for higher OLED efficiency, and also to probe these mechanisms in the solid-state with device-relevant films. 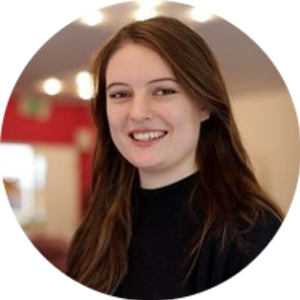