The work published in Nature Communications from our laboratories describes the discovery and biochemical characterisation of an enzyme that serves to bridge a communication gap between two subunits of a biosynthetic pathway. The team of researchers spans three continents and five institutions, and much like the newly discovered enzyme, our efforts bridged both physical and disciplinary boundaries to produce a truly collaborative study.

A Field Trip to Ghana. The story behind this paper starts 10 years ago. In January 2012, as a newly appointed group leader at the University of Aberdeen, Dr. Hai Deng embarked upon a field trip to visit long-time friend and collaborator Dr. Kwaku Kyeremeh at The University of Ghana in an effort to obtain novel isolates of Streptomyces bacteria (Fig. 1a). This genus of bacteria is renowned for their ability to produce biologically active molecules, with notable drugs such as nystatin (antifungal), chloramphenicol (antibiotic) and ivermectin (antiparasitic) being products of these talented bacteria. In the search for chemical diversity, one particular strain isolated from this trip, Streptomyces sp. MA37 (Fig. 1b), revealed a unique capacity for producing a range of fluorinated metabolites.1 Although genome sequencing of the strain was initially conducted to identify novel fluorinase enzymes, acquiring a high-quality genome sequence allowed its full biosynthetic potential to be realised, and sets the stage for this narrative.

Discovery and Biosynthesis of Legonmycins. Several years later, Deng and long-term collaborator Dr. Yi Yu from Wuhan University published the discovery of legonmycins, isolated from the newly acquired Streptomyces sp. MA37 strain (Fig. 2a).2 Members of the pyrrolizidine alkaloid compound class, these are typically produced by plants as a defence mechanism to insect herbivores yet were observed here as bacterial natural products. Furthermore, with the genome sequence in hand, it was possible to locate the biosynthetic gene cluster (BGC) and verify its link to the metabolite via gene knock-out experiments. The minimal biosynthetic machinery for legonmycin production was shown to require the two non-ribosomal peptide synthetase (NRPS) subunits, LgnB and LgnD; a flavin-dependent monooxygenase, LgnC; and a type II thioesterase (TEII), LgnA.

The proposed biosynthetic pathway commenced with loading of L-Thr to the T0 domain, which would be condensed with isovaleryl-CoA (IV-CoA) by the C1 domain from LgnD, yielding IV-Thr appended to the T1 domain. The IV-Thr intermediate is then condensed with L-Pro loaded onto the T2 domain by the C2 domain, with concomitant dehydration of the L-Thr to form dehydrobutyrine (Dhb) residue. The resulting peptidyl intermediate then undergoes intra-molecular cyclisation to release the product from the NRPS, and a subsequent set of transformations by LgnC to produce legonmycin A (Fig. 2b). However, this initial proposal did not assign a role for the LgnA TEII enzyme, although it was shown to be essential for legonmycin production from gene knock-out experiments (Fig. 2c). It is worth noting that stand-alone TEII domains are often found in NRPS BGCs and have been shown to serve as ‘house-keeping’ enzymes that hydrolyse stalled / aberrant intermediates from the NRPS. Although this could have been the function of LgnA, the complete abolishment of legonmycin production upon deletion of the lgnA gene did not seem to support this being its sole function.

Whilst the exact role of LgnA remained elusive, Deng and Professor Steven Cobb at Durham University joined forces to examine and exploit other parts of the biosynthesis. Deng and Steven have a long-standing corroborative partnership that started when they worked together as PDRA and PhD student, respectively, in the laboratory of Professor David O'Hagan on fluorometabolite biosynthesis. The complementary skills offered by each laboratory (Deng, biology and Steven, synthetic chemistry) offered a true chemical-biology approach. Almost 20 years after Deng and Steven themselves had worked together in the lab, two BBSRC-funded PDRAs - Dr. Shan Wang and Dr. Will Brittain - from each of their groups would form a new collaboration, initially focussed on chemo-enzymatic approaches to access legonmycin derivatives with different ring sizes and substitution patterns. However, this left the role of LgnA unassigned.

Understanding the Cryptic TEII Domain: An Interdisciplinary Approach. During her time as a Research Fellow in Deng’s lab, Shan managed to clone and overexpress soluble forms of LgnA, LgnB and LgnD, allowing the NRPS steps of the biosynthesis to be probed in vitro. With the enzymes in hand, Shan was able to reconstitute the biosynthesis of legonindolizidine A (precursor to legonmycin A), again showing that LgnA TEII is essential for biosynthesis. Furthermore, using a clever chemical capturing technique to offload intermediates from the NRPS (originally developed by the Townsend lab), and comparison with chemically synthesised standards – courtesy of Will and Steven at Durham – key intermediates could start to be assigned. Data from these experiments suggested that LgnA TEII likely acts early in the biosynthesis and led to the hypothesis that it may serve to ‘shuttle’ L-Thr units from LgnB-T0 to LgnD-T1, facilitating condensation of IV-CoA. Typically, NRPS subunits (i.e. LgnB and LgnD) are able to communicate with each other by virtue of small complementary regions of protein situated at the C- and N-terminii called docking domains. We therefore postulated that LgnA TEII might represent an evolutionary ‘adapter’ to allow communication in the absence of docking domains.

To test this hypothesis, the precise location of each intermediate needed to be determined. In recent years, intact protein mass spectrometry (MS) has proved a valuable tool for visualising such covalently tethered intermediates, and Deng reached out to Dr. Matthew Jenner at the University of Warwick – a biological MS enthusiast interested in natural product biosynthesis – to start looking at this system. The intact protein MS confirmed the biosynthetic proposal, allowing visualisation of L-Thr loaded onto the LgnB-T0 domain, transfer to the LgnA TEII, and subsequent transfer to LgnD T1 domain. These observations confirmed the novel role of LgnA TEII, but also suggested that highly specific protein-protein interactions must be governing this process to ensure directionality of the system. Deng recruited another long-term friend and collaborator, Dr. Yi Yu at Wuhan University, to use ITC and MST to measure binding constants between various pairings of LgnA, LgnB and LgnD. These data showed that LgnB-T0 is unable to interact with LgnD-C1, however, LgnA-TEII interacts with both T0 and T1 with good affinity – highlighting the requirement for LgnA-TEII to ‘bridge’ the communication gap (Fig. 3).

The really exciting part of this discovery is that bioinformatic analyses suggest that this type of mechanism is widespread in bacterial NRPSs. This sets the stage for discovery of novel natural products and engineering of these pathways through this unique mechanism.

Collaborating in a Pandemic. This is a highly interdisciplinary piece of work that combines microbiology, protein biochemistry, chemical synthesis, protein mass spectrometry and ITC/MST analyses – all of which were required to fully understand this complex biosynthetic system. Scientific collaboration has been at the heart of this study, and the research team has grown over the course of the project with new scientific skills and expertise being brought in when required. The final project team has representatives from five different institutes and three different countries. This international aspect combined with the emergence of COVID-19 has meant that research over the last 2 years has relied heavily on online interactions and discussions. These have at times been at the mercy of bad Internet connections (‘sorry my wi-fi cut out again’) and getting to grips with new technology (‘is my camera on?’ ‘can you hear me?’) but they were always fun, and after all, having fun should always be part of collaborative research. 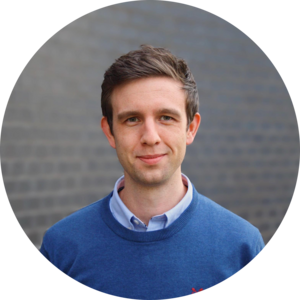 Matthew is an Assistant Professor at the University of Warwick. Research in his lab focuses on the application of mass spectrometry, in combination with other analytical and structural techniques, to solve complex biological problems.