This work has attracted widespread attention after being published on Nature Communications (Nat. Commun. 2019, 10, 1488, https://www.nature.com/articles/s41467-019-09367-8). It was reported by chemistry view under the title of "New path to mixed carbon/nitrogen chelate ligands", and was honored to be selected as the highlight article by the editor of Nature Communications. More interestingly, inspired by this work, we carried out a series of follow-up research work in this year. We developed several new methods to synthesize the carbon based planar pentadentate complexes, and the binding hetero-atoms have been expanded to O and S, leading to the synthesis of CCCCN-, CCCCO-, CCCCS-, OCCCN-, and OCCCO-type pentadentate complexes.

Three-membered unsaturated rings have been widely utilized in organic synthesis due to their inherent highly strained structures, and a ring expansion reaction of the metalla-cyclopropene unit was acted as a key step in the synthesis of the CCCCN-type pentadentate complex in this original work. We wondered what would happen if metalla-azirines, another kind of three-membered unsaturated rings, were used in these reactions. As depicted in Scheme 1, we got some exciting results. The reaction of CCC-type tridentate complex 1 with sodium azide (NaN3) affords the CCCN-type tetradentate complex 2, which contains a fused metalla-azirine unit. The [3+1] cycloadditon of the metalla-azirine unit in 2 with alkynes produced a series of planar CCCCX-type (X = N, O, S) pentadentate carbolong complexes 3-6. It is worth mentioning that although much research has been applied to ring-expansion reactions of strained three-membered unsaturated ring systems, pathways other than [3+2] cycloadditions have rarely been observed in their reactions with alkynes. These reactions represent the first [3+1] cycloadditions of isolated three-membered unsaturated rings with alkynes and complex 4 represents the first example of pentadentate CCCCS complex. This work was published on CCS chemistry recently. (CCS Chemistry 2020, 2, 758-763, https://www.chinesechemsoc.org/doi/10.31635/ccschem.020.202000223.) 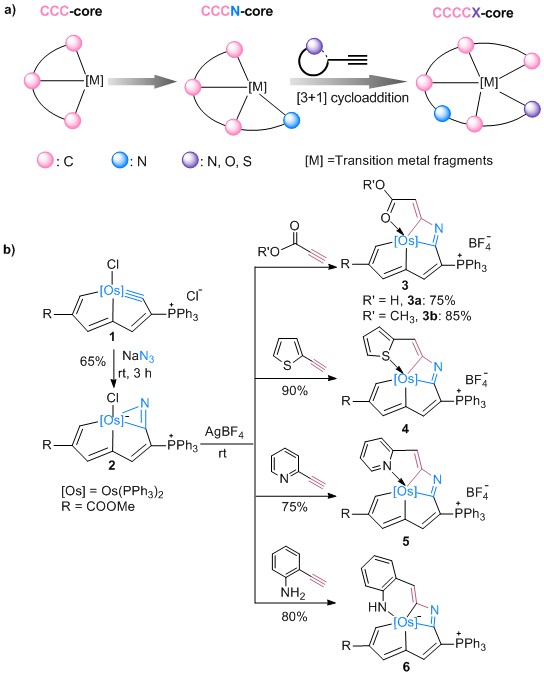 Scheme 1. a) Schematic outline of the strategy; b) Synthesis of CCCCX-type (X = N, O, S) pentadentate complexes by formal [3+1] cycloadditions.

Besides high strained three-membered rings, cyclic metal carbyne complexes are another kind of effective platforms to construct planar pentadentate complexes. As shown in Scheme 2, a highly active metal carbyne unit is contained in the CCCO-type tetradentate complex 7. Treatment of 7 with azides gave the OCCCN-type pentadentate complexes 8, via metalla-click reactions, i.e., the first [3 + 2] cycloadditions of a late transition metal carbyne with azides. Interestingly, these OCCCN-type complexes are an unprecedented family of aromatics in which their metal centers are shared by 4 five-membered aromatic rings. The construction of polycyclic aromatics that share a bridgehead atom with more than three rings has never been accomplished before this work. This work was published on Science Advances. (Sci. Adv. 2020, 6, eaay2535, https://advances.sciencemag.org/content/6/3/eaay2535) 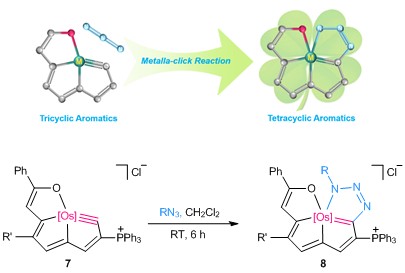 All these complexes, as new members of the carbon based pentadentate chelates, exhibit high thermal stability and remarkably broad absorption from the ultraviolet (UV) to the near-infrared (NIR) region, enabling their potential applications in photoelectric materials and biomedicine. Taking advantages of potential structural diversity of the planar pentadentate chelates, new synthesis and applications are expected, which will contribute to the chemistry of related fields.

Back to After the Paper
Next

The marriage of calixarene and cyclodextrin 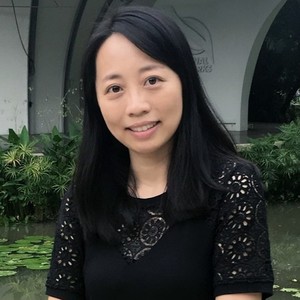