CD44-mediated iron endocytosis: the missing link in the epigenetic regulation of cell plasticity

+2
Raphaël Rodriguez and 2 others See all
Group Leader, raphael.rodriguez@curie.fr
Follow

Back in 2013, as I (RR) was establishing my lab in Paris (France), I stumbled on Stuart Schreiber at a Keystone epigenetics conference in Santa Fe (USA). At that time, I had written a research proposal that got funded but we were not particularly enthusiastic about it. I discussed this project with him as well as the content of a seminal paper published few years prior on the activity of the natural product salinomycin. While this paper was compelling in many ways, I was intrigued by the proposed mechanism of action (MoA). I could tell from Stuart’s supportive comments that we should perhaps revisit this MoA, being more engaging than our funded research. Few years later, we discovered that salinomycin kills ‘cancer stem cells’ by sequestering iron in lysosomes, a mechanism not encountered before to our knowledge. This work revealed that cancer cells in the mesenchymal state are addicted to iron and showed that cell death induced by salinomycin resembled ferroptosis as defined at that time. These findings were published in Nature Chemistry in 2017. Remarkably, in the same year, the Broad Institute published two illuminating papers in Nature showing that cancer cells in a drug-tolerant persister state are dependent on a lipid peroxidase pathway and vulnerable to GPX4 inhibitors, which gave us a great deal of confidence we were onto something important.

Since iron endocytosis, formally mediated by the Transferrin Receptor 1 (TfR1), is translationally repressed by excess cellular iron, we wondered how the mesenchymal state of cells can possibly override this negative feedback loop to up-regulate iron uptake, and questioned why this cell state requires higher iron loads. The cancer models we were using are characterized by up-regulated levels of CD44, a membrane glycoprotein also defined as a ‘cancer stem cell marker’. We learnt from the literature that CD44 is the main receptor of hyaluronates and is associated with many biological processes reliant on cell plasticity. The well-established role of hyaluronates in cancer progression and lack of a clear functional role of CD44 in metastasis prompted us to raise a fairly simple hypothesis: could CD44 mediate endocytosis of iron-bound hyaluronates? We spent the following three years trying to challenge this hypothesis with all possible techniques at our disposal. The fact that CD44 and TfR1 predominantly localize in distinct endocytic vesicles was a real game changer because it allowed us to uncouple both mechanisms visualizing CD44- and iron-positive endocytic vesicles free of transferrin. We had discovered a novel iron uptake mechanism that prevails in the mesenchymal state of cells.

Combining multi-omics approaches, we identified iron-dependent proteins involved in mitochondrial metabolism and epigenetic transitions, being up-regulated in the mesenchymal state. There was the missing link in the regulation of epithelial-mesenchymal plasticity. The cellular content of iron, a metal commonly employed as a catalyst in synthetic chemistry, increases together with proteins whose functions depend on it to alter methylated histone marks repressing the expression of specific genes. Since histone methylation is a competing process, we realized that to transiently shift the cellular equilibrium towards a mesenchymal state, cells must locally increase the concentration of reagents that promote demethylation, including iron and a-ketoglutarate. This is very much akin to physical chemistry processes subjected to Le Chatelier’s principle, defining a fundamental chemical biology paradigm. We later discovered that CD44 was positively regulated by iron at the transcriptional level and incidentally elucidated the role of hyaluronates in cancer progression, linking membrane biology to epigenetics.

This research raises questions of how iron can be manipulated in the context of complex diseases, CD44 being also involved in immunity, inflammation and wound healing. Related to this, it challenges current clinical practices that consist of supplementing cancer patients with iron.

Find the preprint at:

Find the paper at: 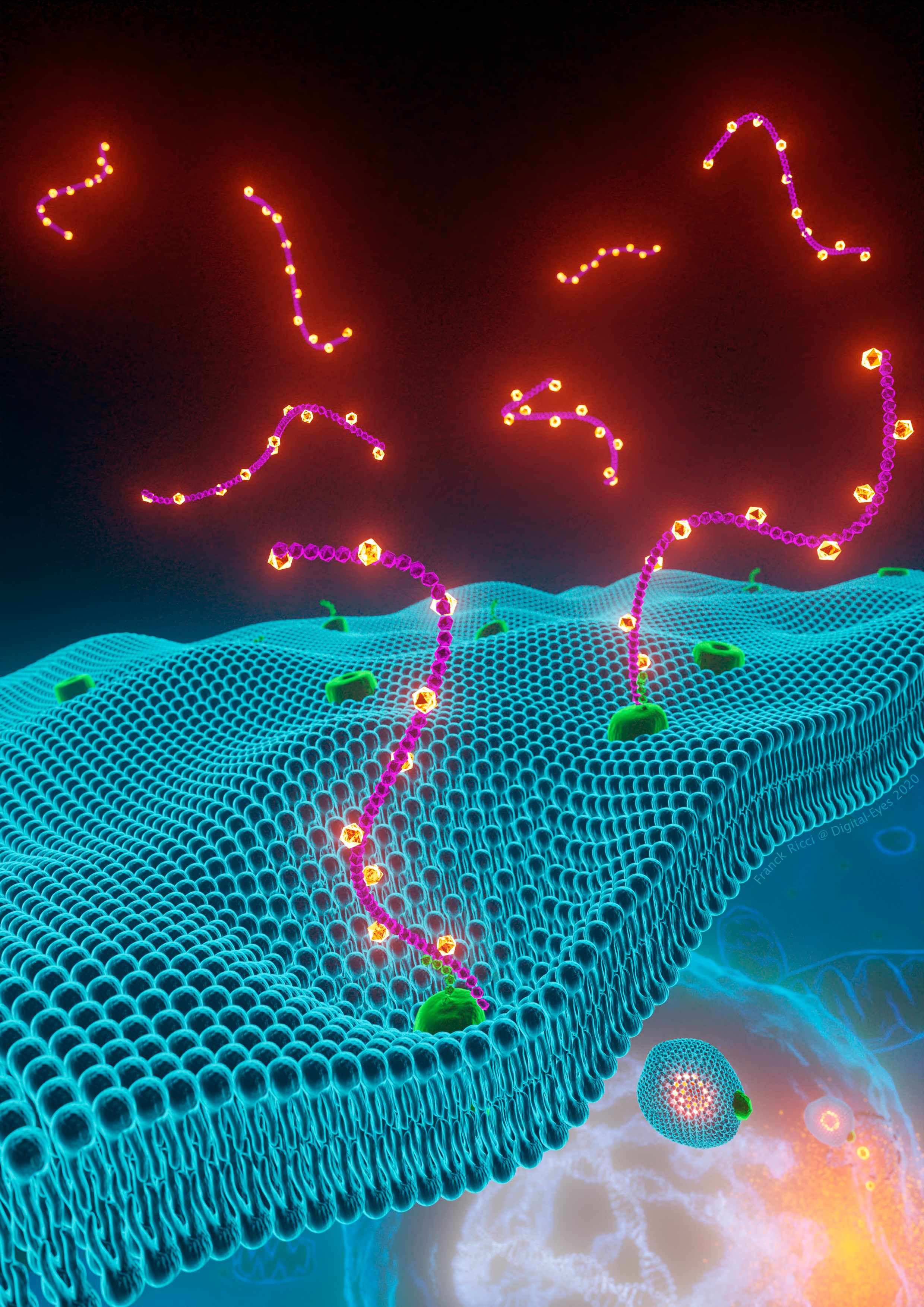 Fig. Iron-bound hyaluronates (orange spheres linked to purple strings) interact with the glycoprotein CD44 (green), at the plasma membrane (blue). These organometallic complexes are taken up by endocytosis to carry iron inside of cells. Iron is then used in mitochondria and the nucleus to alter the chromatin landscape through oxidative demethylation of repressive histone marks, thereby unlocking the expression of specific genes.