We created a curated dataset on lanthanide-based Single-Ion Magnets, developed a dashboard web application to visualize the data (SIMDAVIS) and applied statistical analysis to it. From this we obtained insights both on physical mechanisms and on future avenues for chemical synthesis.
Alejandro Gaita-Ariño, Joana T. Coutinho & Lorena E. Rosaleny
3 contributors
Like Liked by Evelina Satkevic and 1 other
0

Three decades of research in molecular nanomagnets have enabled the preparation of compounds displaying magnetic memory at liquid nitrogen temperature. Here, the authors provide an innovative framework for the design of molecular magnets based on data mining, and develop an interactive dashboard to…

The All Trials campaign, a project advocating that clinical research adopt the principles of open research movement, has the potential to inspire us and revolutionize the way academic research in chemistry, physics, and materials science is conducted. By making all of the data available for scrutiny and analysis, researchers would be able to gain a better understanding of both positive and negative results, giving them a broader and more complete picture. Doing so could lead to more accurate conclusions, a wider perspective, and a better understanding of the materials being studied and even the physics behind their behavior.

The saying "all theories are wrong, some theories are useful" resonates with people doing research on physical properties of chemical compounds. We often apply a highly simplified theory to a very small set of data points, corresponding to a few novel compounds prepared in the same work. At most, the properties of the new compounds are compared to the ones holding the current record, or the choice of the chemical family is justified by a previous success story within the same family. By accessing a larger set of raw data instead, researchers could see what works in practice, from a less biased point of view. This could help us to develop more accurate theories, as well as to identify areas where further research is worth the effort. By analyzing both positive and negative results, researchers can gain greater insight into the materials being studied, enabling us to refine existing theories and develop new ones.

Molecular nanomagnets are a type of molecules capable of presenting magnetic memory up to a certain temperature range. It is often claimed that these materials have potential applications in fields such as computing, electronics, and quantum devices, but to achieve this their properties still need to be optimized significantly. To date, data science has not been applied to molecular nanomagnets, leaving researchers with only anecdotal evidence to test their theories. By applying the tools of data science to this field, including data visualization, researchers can gain a better understanding of the relation between composition and chemical structure of molecular nanomagnets and their physical properties.

In a multi-year effort, we collected chemical and physical data for lanthanide-based nanomagnets, including a large number of relatively negative results (step 1 in the illustration below). This raw data was then curated, cataloged and organized into a dataset (step 2). We developed an interactive dashboard called SIMDAVIS for the visualization of the data (step 3). This dashboard allows any researchers to visualize the dataset and to apply inferential statistical analysis to it (step 4). Our analysis allowed us to gain a better understanding of the magneto-structural relations in lanthanide-based nanomagnets and also gain fundamental insight into the physical mechanisms governing their behavior.[1]

Through the analysis of the data we collected, we were able to improve our understanding of relaxation mechanisms in molecular nanomagnets. The data shows that the parameters to two supposedly independent physical pathways (Orbach process and Raman process) are in fact connected, and we hypothesize that this connection occurs through their common dependence on a physical phenomenon (coupling between spins and vibrations). We also uncovered a clue for future molecular nanomagnets. Some molecular shapes -in particular, the square antiprism- are claimed as promising for developing magnetic memories purely for historical reasons, but the claim is not supported by data. Considering the big picture and analyzing available data for molecules of different shapes, we found that pentagonal bipyramids have obtained exceptionally good results so far. We also have a pretty good idea of why, since they are uniquely protected from vibrations, since all the low-energy vibrations, typically the ones that lead to magnetic memory loss at relatively low temperatures, are disconnected from spin states for symmetry reasons. This finding paves the way for further research into molecular nanomagnets.

Of course, we are aware of the fact that the increasing role of computing in the ongoing climate crisis cannot be addressed by developing futuristic modes of computing. Energetic efficiency gains would lie too far in the future for our pressing needs, and historically we have seen that the Jevons paradox applies, where improved efficiency leads to increased use and higher emissions. Still, even discarding an application to the urgent climate problem, we consider that the fundamental interest of the field is sufficient to merit further research. 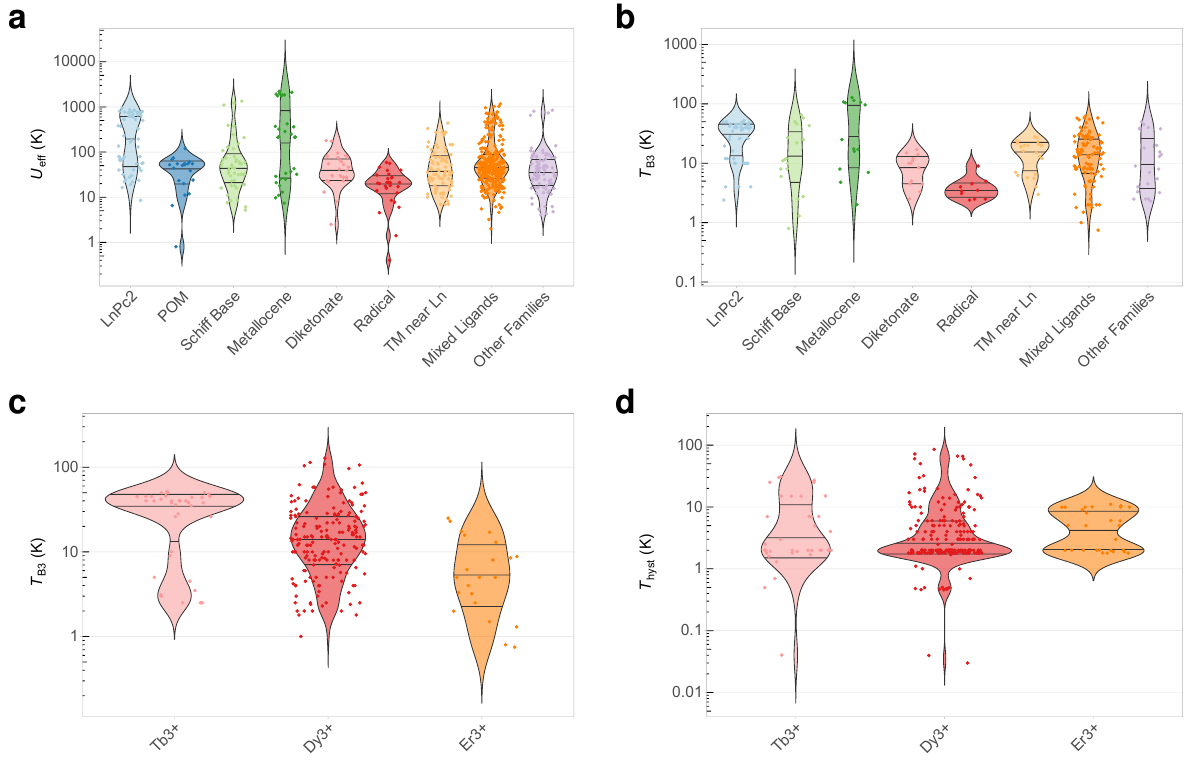 We created a curated dataset on lanthanide-based Single-Ion Magnets, developed a dashboard web application to visualize the data (SIMDAVIS) and applied statistical analysis to it. From this we obtained insights both on physical mechanisms and on future avenues for chemical synthesis.