The Royal Society of Chemistry

Novel approaches to targeted cancer therapy that combine improved efficacy of current chemotherapies while minimising side effects are highly sought after. The development of single-chain polymeric nanoparticles (SCPNs) as bio-orthogonal catalysts for targeted site-specific pro-drug activation is a…

Approaches to targeted cancer therapies that combine improved efficacy of current chemotherapies while minimizing side effects for patients are highly sought after. A team of researchers within the European Marie Skłodowska-Curie European Training Network THERACAT1 proposed solutions to this problem by developing new strategies to specifically deliver drugs only to the tumor site. The idea was that bio-orthogonal transition metal based catalysts (TMCs) could activate prodrugs — drugs made inactive by a chemical protecting group— at the site of interest because of a highly selective activation reaction that does not occur in living cells. At the UCRA-2022 conference in Leamington Spa 21-23/9/2022 dedicated to catalysis in unconventional environments, exciting state-of-the-art contributions on this challenging topic were disseminated by i.a. Jesús Santamaria, Peter Sadler and Ana Pérez-López, who have been using transition metal complexes (TMCs) to either directly attack tumor cells2 or to induce a bio-orthogonal reaction that activates a drug from an inactive prodrug in situ.3  The latter approach has attracted a lot of attention the past decade4 and Unciti-Broceta and coworkers elegantly showed that by using Pd(0)-based polystyrene microspheres such prodrug activation works in in vivo systems such as zebra fish embryos and rats.5,6 These microspheres are implanted via syringe techniques at the tumor location where they should be active. But, how can one get TMC-based catalysts at inaccessible tumor locations or when one does not exactly know where the tumor cells are?

To address the challenge to guide TMC-based catalysts to the target location, high catalyst stability and activity is required, as well as good biocompatibility and the ability to attach recognition units for targeted delivery of the catalyst. Hereto, we applied single-chain polymeric nanoparticles (SCPNs) as carrier materials for the TMCs. SCPNs are amphiphilic polymers that fold in water into compartmentalized, nanometer-sized structures with size varying between 5-20 nm, which have a hydrophilic, biocompatible exterior and a hydrophobic interior.7,8 In many ways, the folding of the amphiphilic polymer into an SCPN is reminiscent of protein folding into functional 3D structures.9 By embedding the TMC of choice into the SCPN’s hydrophobic interior, we anticipated that we could prevent the TMC from undesired interactions with constituents in complex media that deactivate the catalyst, but also to sequester substrates around catalytic sites to enhance catalytic rates. The poster we presented at UCRA-2022 showed that the combination of molecular design of the polymer’s microstructure, optimization of ligand-Pd(II) combination, and engineering of the hydrophobicity of the substrate via logP all matter to obtain SCPNs that convert substrates in complex media.

We started synthesizing a range of amphiphilic polymers with a polyacrylamide backbone, Jeffamine-based water soluble grafts, hydrophobic dodecyl grafts in combination with hydrogen-bonding benzene-1,3,5-tricarboxamide grafts to induce folding, and Pd(II)-binding ligands triphenylphosphine and bipyridine. The resulting polymers collapsed/folded into 5-6 nm sized nanoparticles, with an inner hydrophobic domain that comprised the Pd(II) catalyst. We first focused on Pd(II)-catalysed depropargylation reactions to activate a range of prodyes in water, PBS or the cell culture medium DMEM and assess the relation between polymer microstructure, ligand and logP of the substrate. Our results showed that the catalytic activity of nanoparticles is primarily impacted by the ligand-metal complex, the polymer microstructure has an influence as well, but a minor one. The rate of the reaction increased for hydrophobic substrates, corroborating our predictions that substrate sequestration enhances reaction rates because of high local concentrations. Pd(II) leaching studies confirmed little to no loss of Pd(II) from the hydrophobic interior which is important as it can reduce off-target toxicities in future applications. Careful deconstruction of the catalytic system revealed that covalent attachment of the ligand to the polymer backbone is necessary to retain its catalytic activity in DMEM, a confirmation of the usefulness of the SCPN approach for deprotection reactions in complex media. With the best performing system, we tested the activation of a range of prodrugs in collaboration with the Unciti-Broceta group in Edinburgh. We found that the rate of pro-drug activation in water accelerated efficiently by catalytic SCPNs, whereas in DMEM the results depended on the type of protecting group and the logP of the prodrug. So, further engineering of the prodrug’s logP will allow to further optimize the catalyst’s results.

Given our recent promising results where the nature of the ligand – Pd(II) complex and the logP of the substrate collaborate to get activity in complex media, the next step is the further optimize the system and equip the SCPNs with suitable recognition units that target specific cancer cells. 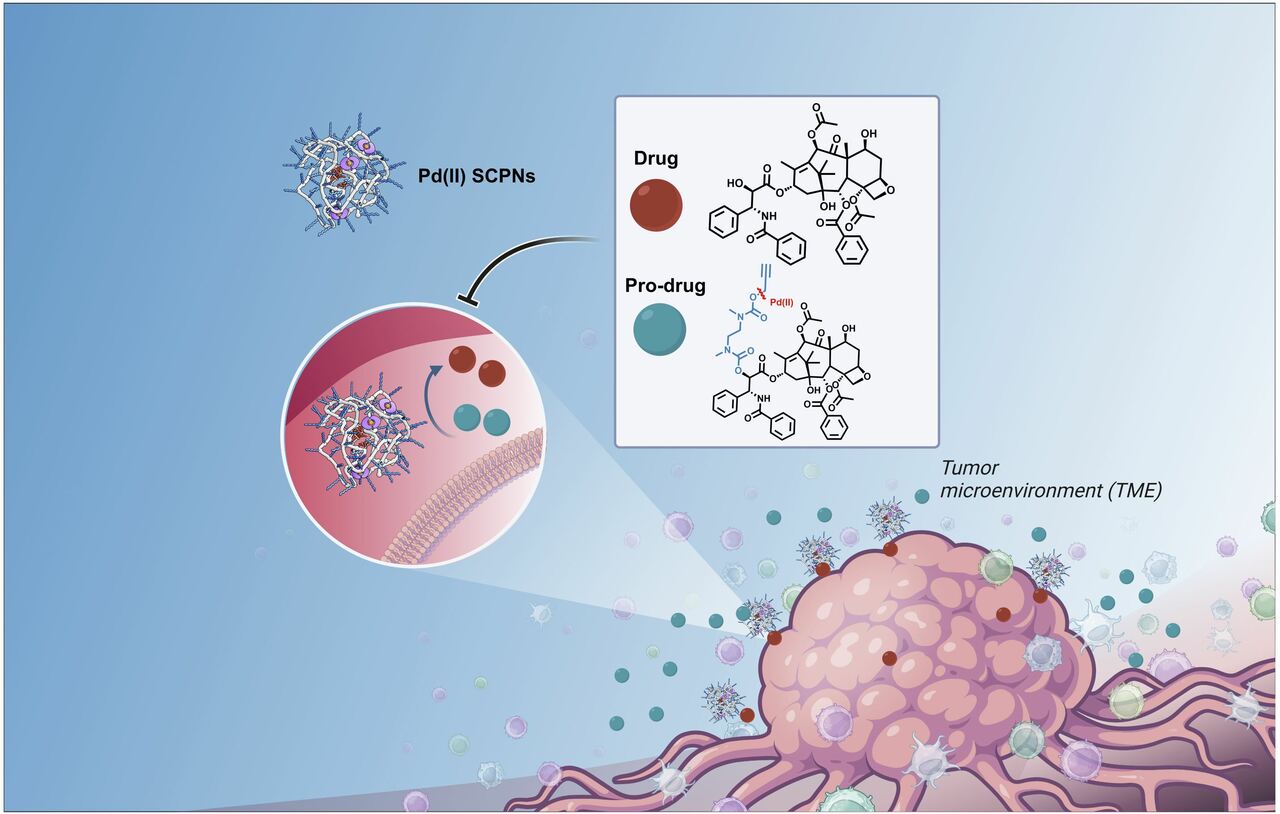