Chiral aldehyde catalysis is a useful strategy in the catalytic asymmetric α-functionalization of amino methyl compounds but these reaction types are limited. Here, the authors report two chiral aldehyde-catalysed diastereodivergent reactions, namely, a 1,6-conjugate addition and a bio-inspired Mann…

In 2014, a novel chiral aldehyde catalytic strategy based on reversible imine formation principle was proposed by our group. Under the guidance of this strategy, two reactions, including an a-alkylation of 2-aminomalonate (Fig. 1 a)1 and a conjugated addition of glycine derivatives to enones (Fig. 1 b)2, were successfully realized. We noticed that the catalytic site distribution of the optimal chiral aldehyde catalysts in these two reactions were different (Fig. 1 reaction models I vs II). So, we invited prof. Qin Ouyang in the Third Military Medical University to conduct a comprehensive computation for the possible chiral control models induced by these different catalysts. Results told us that the formation of an intermolecular hydrogen bond is vital for achieving good enantioseletivities in the former reaction (reaction model I); while in the latter, the steric effect of the R group is the key factor leading to highly enantioselective products (reaction model II). Based on these results, we thought that whether we could respectively apply the effects of hydrogen-bonding and steric repulsion to make an acceptor approach a donor from different face. If so, a stereodivergent organic transformation would to be realized.

We then verified our assumption by reactions that could generate two or more stereogenic carbon centers. Firstly, the asymmetric 1,6-conjugated addition of glycines to para-quinone methides was selected as a model. We were pleased to find that both anti- and syn-selective reactions could be realized efficiently. After we finished this research, we thought it would become more valuable if our strategy was applicable for more than one transformation. So, the Mannich reaction of pyridylmethylamines and imimes was selected as another model for further verifying our assumption. As the results we reported in our paper, both anti- and syn-Mannich reaction were achieved in high efficiency (Fig. 1 c). 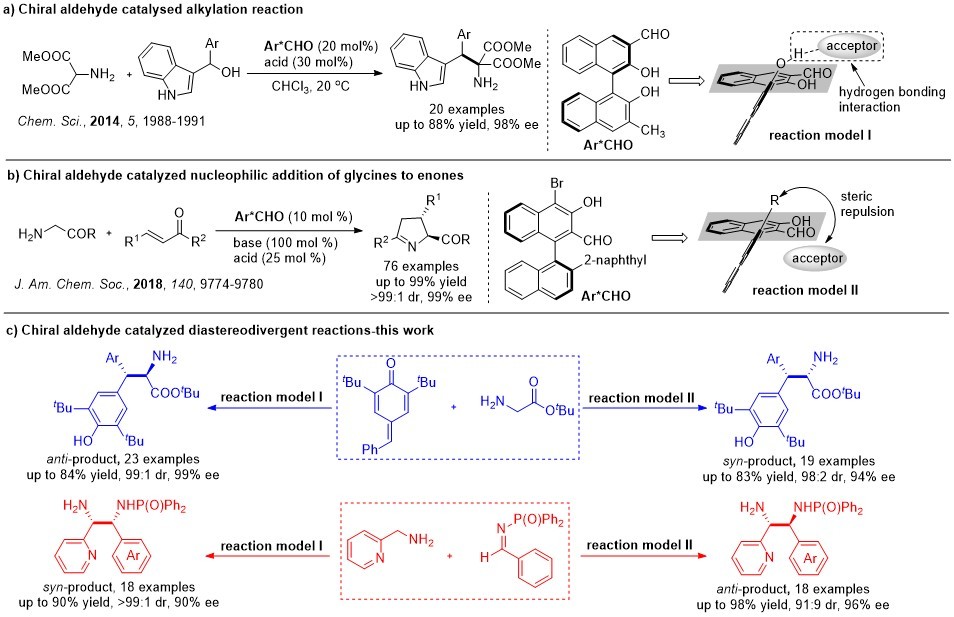