His-C2-directed modification is chemically challenging and rarely occurs in nature due to the low reactivity of this position. Now, the prenlytransferase LimF has been discovered and applied for geranylation of histidine-containing peptides and imidazole-containing small molecules, showcasing the ve…

Our paper entitled “LimF is a versatile prenyltransferase for histidine-C-geranylation on diverse non-natural substrates” in Nature Catalysis is available here:

Prenyltransferases (PTases) involved in cyanobactin biosynthesis represent a major family of enzymes responsible for peptide prenylation. Unlike the well-known aromatic ABBA-type PTases with canonical β/α barrel fold that prenylate small molecules1, the cyanobactin PTases commonly adopt a truncated β/α barrel fold with a unique solvent-exposed cavity to accommodate a large peptidic substrate2,3. Such a unique architecture made cyanobactin PTases highly selective to a particular mode of prenylation but permissive to the global substrate sequences. Owing to these features, cyanobactin PTases have attracted considerable attentions as potential biocatalysts for peptide-alkylation.

LimF is involved in the lim pathway from Limnothrix sp. CACIAM 69d. Although it was previously annotated as a homolog with Tyr-O-PTase PirF4, the sequence similarity network analysis hinted LimF would have unique catalytic activity. In our paper published on Nature Catalysis, we have characterized LimF as a unique His-C-PTase. To further study LimF, we first synthesized the backbone-cyclized (bc) putative substrates bcLimE1, bcLimE2, and bcLimE3 based on the analogy of lim pathway and other cyanobactin biosynthetic pathways. Upon the incubation with recombinant LimF and various prenyl donors, we found that the His residue of bcLimE2 was geranylated in the presence of geranyl pyrophosphate (GPP) (Figure 1). Meanwhile, neither bcLimE1 nor bcLimE3 was modified with any prenyl donors. We further validated the geranylation to be forward direction (i.e. prenylation at the primary carbocation) on the imidazole-C2 position of His sidechain by NMR analysis of LimF-modified bcLimE2. We were surprised by such observations since His modifications are rare in nature; especially the chemistry occurs at the most electron-deficient imidazole-C2 position. To further evaluate the catalytical potential of LimF, we assayed it with a series of synthetic substrates including dipeptide Ac-Ala-His-NH2, Fmoc-His-OH, and freestanding His; LimF retained its fidelity of His-modification on diverse substrates.

To develop LimF as a potential peptide-alkylating biocatalyst, we next questioned if we could systematically establish a general rule to design the LimF-modifiable substrate and investigate the substrate limitation of this unprecedented modification. Facilitated by the custom-made cell-free translation technology (flexible in vitro translation [FIT] system) in our lab, we were able to readily generate various thioether-macrocyclic peptides (teMPs) by simply altering the encoding DNAs. The combination of LimF and FIT system (FIT-LimF system) enabled us to conduct transcription, translation, and posttranslational geranylation in a one-pot manner (Figure 2A). The results from FIT-LimF system allowed us to establish the guidelines and limitations of LimF: (1) Small/hydrophobic residues at His –1 position are preferred, whereas bulky/charged residues are unfavored; (2) His +1 position is highly variable except Pro; (3) Ring size, length, and the global substrate sequences are well-tolerated. These guidelines were validated by testing a series of arbitrarily chosen teMPs. It is worth noting that these rules grant us to design any ‘LimF-modifiable’ peptides and shed light on the LimF’s applications as a biocatalyst on diverse substrates.

Serendipitously, we discovered a teMP that resulted in two different geranylated products in LimF reaction. Which turned out to be His-C-geranylation and Tyr-O-geranylation through NMR structure elucidation. Subsequent substrate probing and kinetic analyses revealed Tyr-O-geranylation as the secondary, i.e. the turnover rate is ~10-fold slower than the His-C-geranylation; however, it has a comparable rate to known other Tyr-O-geranylation enzymes. Most importantly, such a bifunctionality has not been observed in this family of PTases that generally catalyze the sole mode of prenylation. This unique property of LimF could be evolutionarily beneficial for a PTase to evolve into another PTase acting on distinct residues and supports the diverse repertoire of prenylated cyanobactins by the corresponding PTases.

Next, we wondered how LimF catalyzes the His-C-geranylation as well as the alternative Tyr-O-geranylation. We performed an X-ray crystallographic of LimF. By co-crystallizing, we obtained the complex structure of LimF with geranyl S-thiolodiphosphate (GSPP) and pentapeptide substrate. Along with the site-directed mutagenesis studies, the His172 residue of LimF is essential for its activity. Notably, this unique His residue is not conserved in most cyanobactin PTases, except for the Arg-N-PTase AgcF. This suggests that the His172 residue likely plays a critical role in the recognition of His residue, which could further serve as a probe for mining novel cyanobactin PTase that modifies charged sidechain.

Inspired by the versatility of LimF reaction, we finally examined if LimF can act as a biocatalyst for peptide late-stage alkylation (Figure 2B). Two different-sized His-containing peptidic drugs, pramlintide, and leuprorelin, were almost quantitatively geranylated by LimF. To our surprise, the non-peptidic, small-molecule cimetidine with 4,5-dialkylated imidazole moiety was also efficiently modified by LimF. It should be noted that, despite the significant advances in various chemical approaches, selective C2-modification of His remained challenging5,6, probably owing to the low reactivity of the C2 position and the interference of more nucleophilic nitrogen atoms. We demonstrated that LimF can perform remarkable chemo- and regioselectivity His-C-geranlyation with a broad range of substrates, highlighting its potential as a versatile biocatalyst for the late-stage modification of various imidazole-containing molecules.

Figure 2: (A)The schematic illustration of the FIT-LimF system for in-depth substrate profiling. (B) LimF acts as a biocatalyst for regioselective His-geranylation on unprotected drug compounds.

Collectively, our study expands the knowledge of posttranslational modification of peptides. To the best of our knowledge, LimF represents the first enzyme for His-C2-prenylation in nature. These results also highlighted cyanobactin biosynthesis as a rich source to mine novel natural products and biosynthetic machinery to expand the chemical space of peptide modification and set the stage for further discovering PTases with novel activities 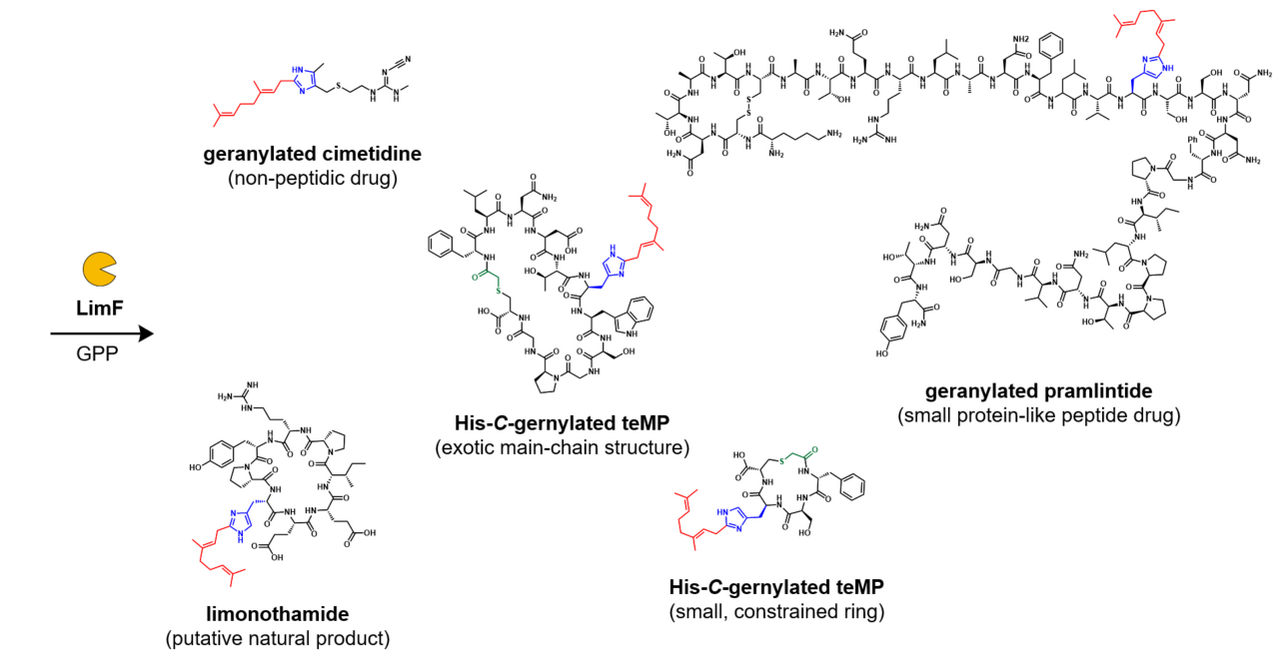