Terpene cyclases are a class of enzymes that can specifically catalyze the cyclization of isoprenoid diphosphate precursors to generate the core-skeletons of terpenoids. Here, I briefly introduce the ubiquitous cryptic aromatic prenyltransferase activity recently discovered in the greater family of class I terpene cyclases, which represents an international collaboration with the laboratories of Professors Ikuro Abe at Tokyo University and David Christianson at the University of Pennsylvania.

To provide insight on catalytic mechanism in these bifunctional enzymes, we additionally report crystal structures of the class I terpene cyclases AaTPS and FgGS. These class I terpene cyclases are bifunctional, in that they catalyze both terpene cyclization and aromatic prenyltransferase reactions in the same active site. For the aromatic prenylation mechanism, we propose that substrate binding leads to active site closure, after which metal-triggered ionization of the DMAPP diphosphate group yields an allylic cation and a Mg2+3-PPi complex. The allylic cation alkylates the adjacent heteroaromatic indole ring. Following carbon-carbon (or carbon-nitrogen) bond formation, the acidic proton of the indole carbocation intermediate is abstracted by the PPi co-product to yield the prenyl indole product. 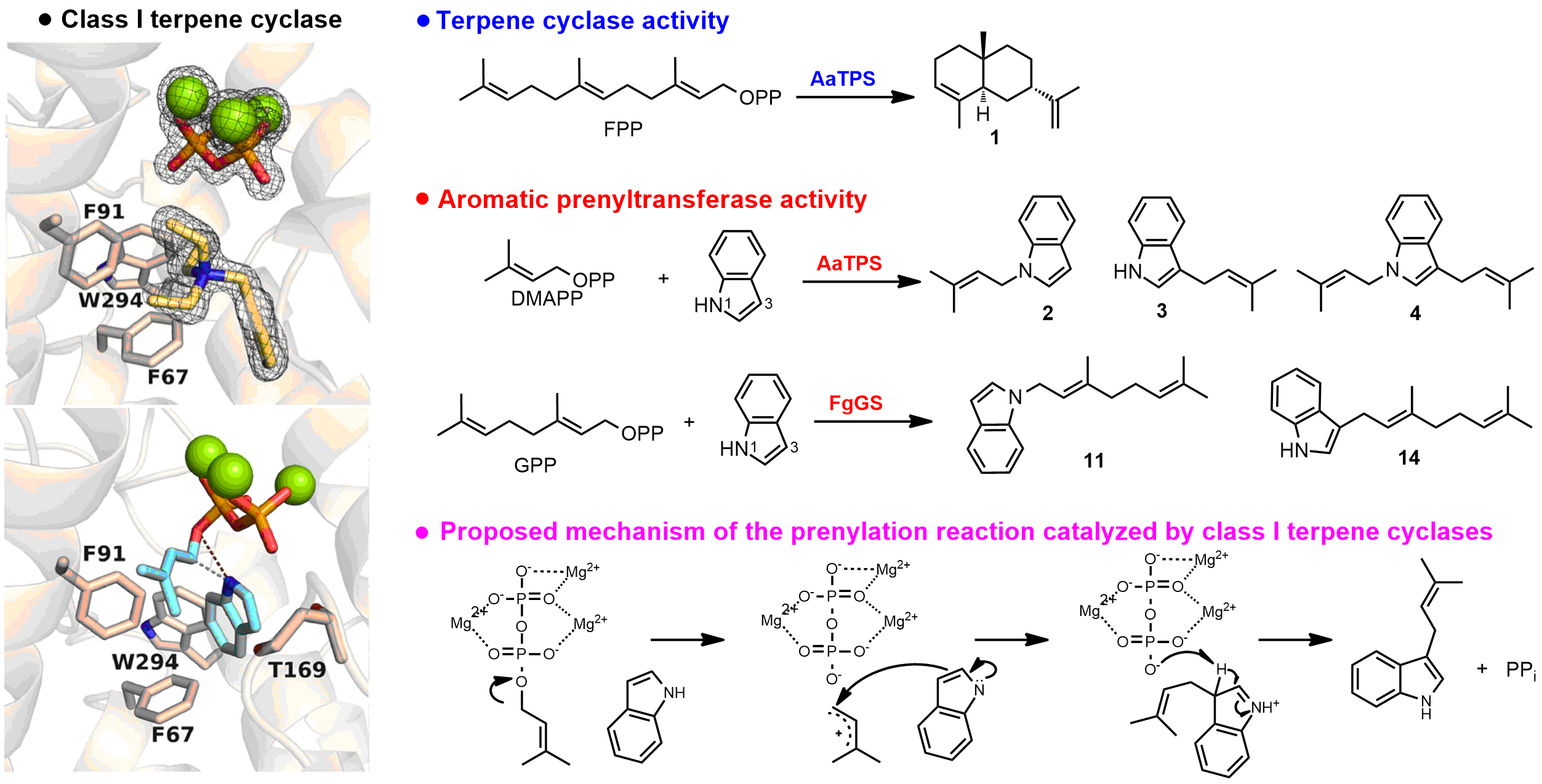 To reveal the physiological significance of the cryptic aromatic prenyltransferase activity of terpene cyclase, we measured the cellular concentrations of indole, polyisoprenoid precursors, and the resulting prenylindoles. We found that the concentration of indole is positively correlated with isoprenoid precursors and negatively correlated with terpenes. Additionally, it has been reported that isoprenoid precursors (DMAPP, IPP, and GPP) are toxic when aberrantly accumulated at high cellular concentrations.8, 9 Therefore, we suggest that the aromatic prenyltransferase activity discovered here serves as a regulatory mechanism to alleviate cellular toxicity that would otherwise result from the accumulation of isoprenoid diphosphates.

In conclusion, based on the information provided by in vivo and in vitro assays, as well as structural studies, we unveiled the cryptic aromatic prenylation activity of class I terpene cyclases. Further structural and functional comparisons of terpene cyclases with other enzymes of terpenoid biosynthesis may reveal additional insight into the evolution of catalysis in these systems. In this work, our use of the efficient precursor- providing platform was key to enabling the discovery of novel cryptic activity. It is worthwhile to muse about other enzyme families in nature that might similarly possess cryptic activities that have yet to be discovered.