Pierfranco Demontis said in 1988, “Ice becomes a fast-ion conductor at high pressure and high temperatures,”1 but his prediction was only hypothetical until recently. After 30 years of study, superionic water ice was verified experimentally2 in 2018. Superionicity may eventually explain the strong magnetic field in giant planetary interiors3.

What about Earth, whose interiors are also under extreme pressure and temperature conditions? Although three-quarters of Earth’s surface is covered by water, standalone water or ice rarely exists in Earth’s interiors. The most common unit of “water” is hydroxyl, which is associated with host minerals to make them hydrous minerals. We then narrowed down our research scope to a hydrous mineral, the iron oxide-hydroxide (FeOOH). In this material, we also discovered it enters the exotic superionic phase, similar to water ice in giant planets.

Similar to previous works, our research started with theoretical simulation. In the example of superionic ice, hydrogen will get released from oxygen and become liquid-like, and move freely within the solid oxygen lattice. Along this track, we mimicked the pressure-temperature of depths 1800-2900 km beneath Earth’s surface and monitor the motion of hydrogen atoms in FeOOH. The hydrous phase developed into the superionic phase above about 1600°C and 800,000 times normal atmospheric pressure. All hydrogen atoms are no longer bonded to oxygen atoms, but can move freely in the solid oxygen lattice of FeO2. Here, FeO2 is a newly found chemical composition that is only stable under high-pressure conditions4. The predicted conditions ensure a large portion of Earth’s lower mantle can host the superionic FeOOH and potentially other hydrous mineral. Theoretically, after losing its only electron, hydrogen becomes naked proton. We can image the flowing of protons in superionic FeOOH may forms proton rivers in such deep Earth regions.  The solid mantle may its special form of river under suitable pressure-temperature conditions.

Shorter than the experimental discovery of superionic water, it took us roughly 3 years to accomplished the experiment and we shall thank all crew members for their incredible patience, who make it possible to combine both experiment and simulation on one paper. Our experiments mainly use the so-called diamond anvil cell to approach megabar pressure and laser-heating for controlled sample heating. The technical challenges come from the lack of x-ray probes to detect to H atoms in a diamond anvil cell, which is made of simply a squeezed pair of diamond anvils5. We first studied the evolution of O-H bonding using Raman spectroscopy under ambient temperature. The O-H bonding softens abruptly above 73,000 times normal atmospheric pressure, along with ~ 55% weakening of the O-H Raman peak intensity. These results indicate that some H+ may be delocalized from oxygen and become mobile, thus, weakening the O-H bonding, consistent with simulations. However, the softening and weakening of the O-H bonding at high-pressure and room-temperature conditions can only be regarded as a precursor of the superionic state because high temperature is required to increase the mobility beyond the unit cell.

For superionic materials, we expected an obvious electrical-conductivity change, which is robust evidence of superionization. We then measured the electrical-conductivity evolution of the sample at fixed pressure and increasing temperatures. Electrical conductivity doubled at around 1500-1700°C and 121,000 times normal atmospheric pressure, indicating the diffusive hydrogen had covered the entire solid sample. Above this critical temperature, FeOOH becomes a fast-ion conductor or a superionic state.

The pyrite-type FeO2Hx is just the first example of superionic phases in among hydrous minerals in the deep lower mantle. It is very likely that hydrogen in the recently-discovered dense hydrogen-bearing oxides, such as dense hydrous phases, may also exhibit superionic behavior. A superionic phase will dramatically change the geophysical picture of electrical conductivity, magnetism, and materials transportation. Because materials exchange in-between solids are extremely inefficient, the mantle convection was previously thought to be slow, often described by thousands to millions of years. There is no direct observation of how materials are cycling thousands of kilometers below the surface. However, the existence of a superionic phase suggests the rate of mantle convection could be magnitudes higher. Similar to water rivers, fast-moving hydrogen connects remote regions by transporting heat and mass. The “metabolism” of solid Earth may be faster than previously thought. 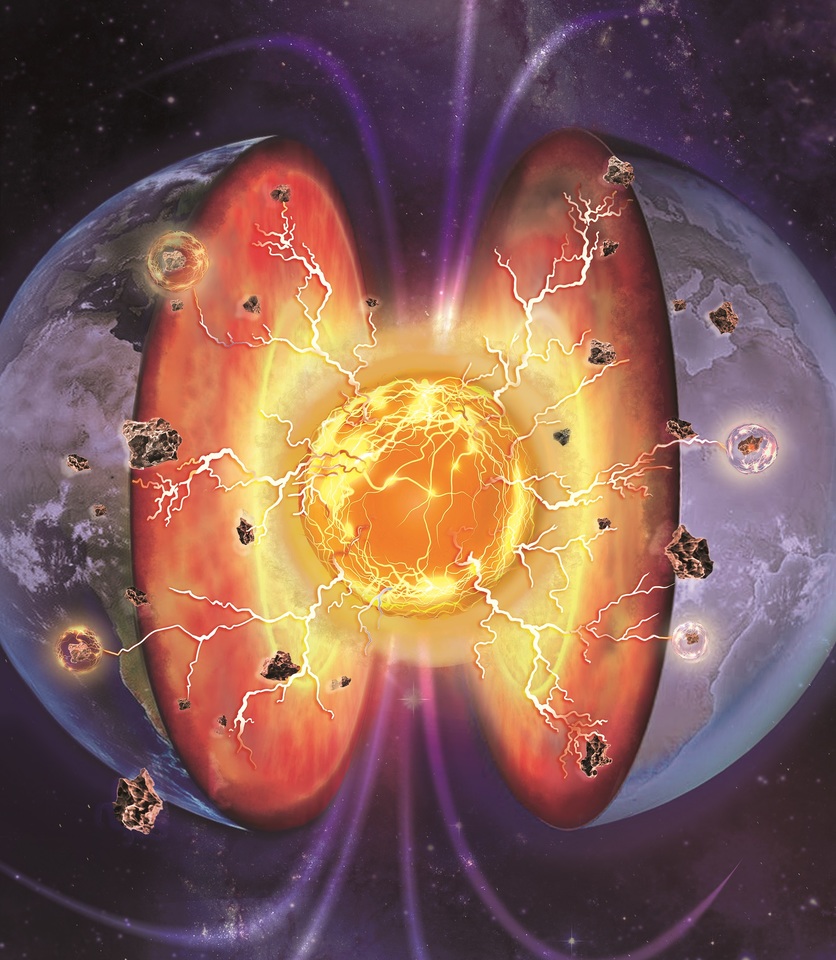