Our group has been focusing on developing Cu-chiral counteranion/ligand catalysed asymmetric reactions involving radical intermediates. Ever since 2016, we have realized a series of asymmetric alkene difunctionalization reactions.1,2 Recently, we have reported a copper-catalysed asymmetric Sonogashira reaction, using terminal alkynes and various alkyl halides as substrates.3 However, from the viewpoint of atom- and step-economy, direct oxidative coupling of universal C–H bonds would bypass the need to pre-functionalize starting materials, thus making it a more ideal synthetic approach.

In comparison to alkene difunctionalization with mildly oxidative radical precursors and cross coupling with alkyl halides, direct C–H functionalization usually require strong external oxidants, which may pose additional challenges. In this area, our group has just realized an asymmetric intramolecular amination of benzylic/allylic secondary C(sp3)–H bonds, using N-hydroxyphthalimide (NHPI) as a hydrogen shuttle.4 Motivated by the success, we turned to the more challenging functionalization of racemic tertiary C(sp3)−H bonds, which had remained unsolved by the research community for a long time. According to previous works, direct intermolecular tertiary C(sp3)−H abstraction is difficult due to the steric hindrance. We got inspiration from the classic Hofmann-Löffler-Freytag reaction, in which an intramolecular 1,5-hydrogen atom abstraction by a nitrogen-centered radical results in regioselective formation of a carbon radical. After thorough optimization, we finally realized a highly enantioconvergent tertiary β-C(sp3)–H amination of racemic ketones with copper/chiral phosphoric acid dual catalysis. An important feature of this work is that the transition metal is not directly involved in the formation of the tertiary carbon radical. Thus, a rapid radical-rebound process as well as the resulting chirality retention issue associated with common transition metal catalysed stepwise nitrene/oxene C–H insertion is avoided, highlighting the great potential of the current strategy for developing enantioconvergent tertiary C(sp3)–H functionalization. 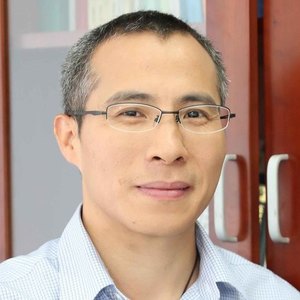 Dong Xiao-Yang
about 1 year ago