ATP acts as a co-substrate in enzyme catalysed reactions, but can also specifically bind metal ions. Here, we show that ATP interacts with copper ions and forms a Cu(II)-ATP complex that efficiently catalyses Diels-Alder reactions, and determine ATP residues that are essential for this activity.
Changhao Wang
Associate Professor, Shaanxi Normal University
Follow
Like Be the first to like this
0

ATP acts as a co-substrate in enzyme catalysed reactions, but can also specifically bind metal ions. Here, the authors show that ATP interacts with copper ions and forms a Cu(II)-ATP complex that efficiently catalyses Diels-Alder reactions, and determine ATP residues that are essential for this acti…

Artificial metalloenzymes (ArMs) are constructed from incorporation of metal cofactors into biomolecular scaffolds such as proteins and nucleic acids, which are used to create new-to-nature catalysts and expand the reaction types. Owing to the diverse chiral structures and relatively simple compositions, nucleic acids in duplex, G-quadruplex and triplex structures have been employed to construct nucleic acid-based ArMs, which have been successfully applied to a variety of enantioselective reactions. However, the current nucleic acid-based ArMs always contain several tens to hundreds of nucleotides to support the scaffold, making it difficult to probe the precise location of active centers and understand the catalytic mechanism. The Wang group in Shaanxi Normal University (Xi’an, China) is interested in the design of novel artificial (metallo)nucleases and the study of their structure-activity relationship, which are aiming to explore the potential catalysis of nucleic acids in bioorganic synthesis, synthetic biology and prebiotic chemistry.

In consideration of my research experience on G-quadruplex DNA-based enantioselective catalysis1 and cyclic dinucleotides synthesis2, we initially selected cyclic dinucleotides as the simple hosts to construct artificial metallonucleases to examine their potential catalytic activity. Recently, we found that cyclic di-AMP (c-di-AMP) specifically interacts with copper(II) ion to assemble into an artificial metalloribozyme (c-di-AMP·Cu2+), which shows highly enantioselective activity in Friedel-Crafts reaction3 and Diels-Alder reaction4. Furthermore, the rigid twelve-membered ring structure and two adenine moieties in c-di-AMP are revealed indispensable for the enantioselective catalytic performance of c-di-AMP·Cu2+, in which two c-di-AMP are stacking across in a dimeric scaffold and the copper(II) ion is locating in an adenine-adenine plane as supported by spectroscopic characterizations and theoretical calculations.

In this work5, we describe that a Cu(II)-ATP complex (Cu2+·ATP) efficiently catalyzes Diels-Alder reactions with high reactivity and enantioselectivity. Based on the ATP analogues experiments, spectroscopic characterizations and density functional theory calculations, three key residues (N7, β-phosphate and γ-phosphate) in ATP are identified in complexation of the Cu(II) ion, resulting in an entity of Cu2+·ATP that is responsible for the efficient catalytic activity and stereoselectivity (Fig. 1). In fact, this novel metallo-ATP catalyst is a derivative from the c-di-AMP based artificial metalloribozyme. The initial result is originating from a control experiment in c-di-AMP·Cu2+ catalyzed Diels-Alder reaction when investigating the effect of different fragments of c-di-AMP. Compared to c-di-AMP·Cu2+, adenosine, AMP, ADP and ATP are used as control scaffolds. In the Cu2+-catalyzed Diels-Alder reaction, the addition of adenosine or AMP produces no chiral product and ADP provides the product in low ee. Unexpectedly, the presence of ATP in a Cu2+-catalyzed Diels-Alder reaction gives a comparable enantioselectivity compared to c-di-AMP, which drives us to write another story of ATP-based enantioselective catalysis.

This work describes the discovery that Cu-complexes of simple nucleotide triphosphates can act as efficient and stereoselective catalysts in complex reactions. The plausible coordination structure of the Cu(II)-ATP complex is able to explain the origin of chiral induction and direct the rational design of nucleotide-based catalysts. Since ATP is widely spread in nature serving as an energy-storing molecule and the ATP-metal complexes in biotic reaction are thought to function mostly as co-substrates rather than co-enzymes, this finding has fundamental implications for potential roles of ATP in the chemical selection of important metabolites in the abiotic stages of the emergence of life.

Changhao Wang
Associate Professor, Shaanxi Normal University
Follow
We are interested in the design of novel artificial (metallo)nucleases and the study of their structure-activity relationship, which are aiming to explore the potential catalysis of nucleic acids in bioorganic synthesis, synthetic biology and prebiotic chemistry. 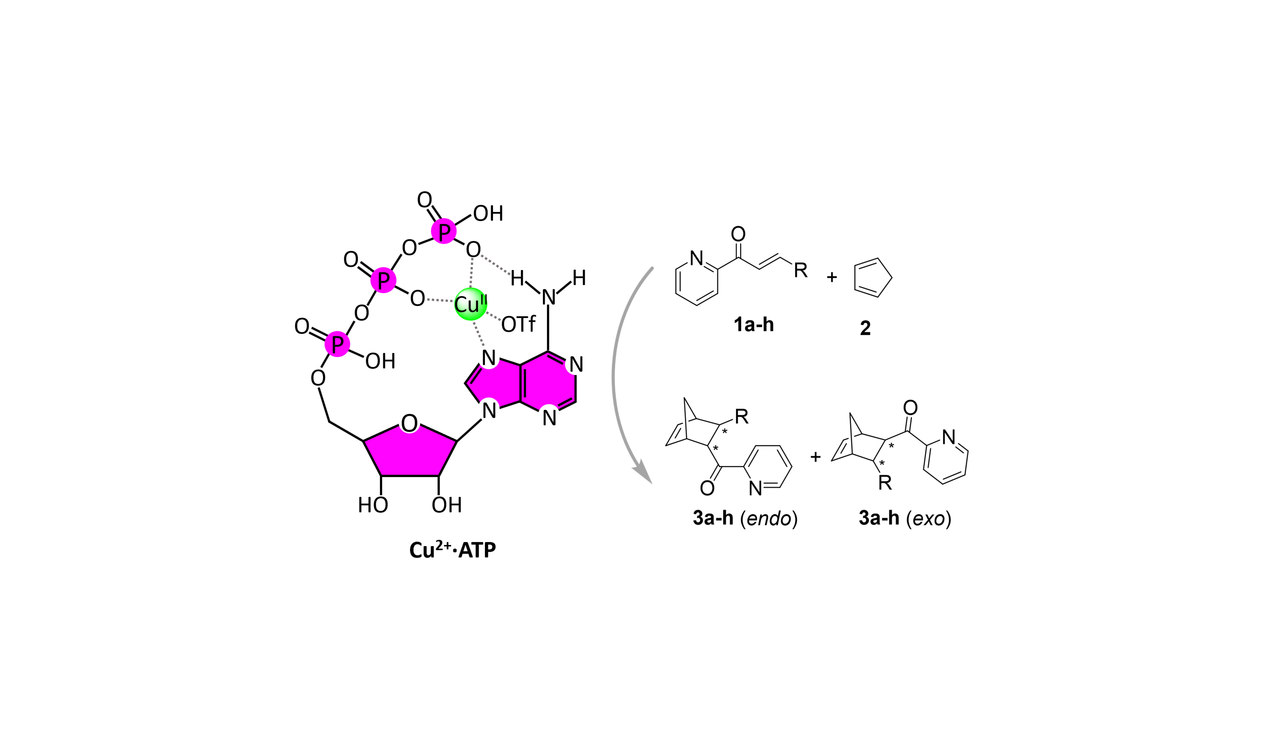 ATP acts as a co-substrate in enzyme catalysed reactions, but can also specifically bind metal ions. Here, we show that ATP interacts with copper ions and forms a Cu(II)-ATP complex that efficiently catalyses Diels-Alder reactions, and determine ATP residues that are essential for this activity.