In 1884  a satirical novella entitled "Flatland: A Romance of Many Dimensions" by  Edwin Abbott Abbott was published under the pseudonym of A. Square. The book was a comment on the hierarchy of Victorian culture, but Abbott used the fictional two-dimensional world of Flatland to mask his criticism. In the book, the main character, A Square, lived in a world of two dimensions and in the book he visit the one-dimensional Lineline and gets a visit from the Sphere from the three-dimensional Spaceland. Organic molecules in medicinal chemistry can be categorised to have different degrees dimensionally and a large amount of the drugs are considered to have a large degree of flatness due to the inclusion of aromatic rings. However, over the last decades, diversity-oriented synthesis (DOS) has evolved to yield a number of strategies for increasing the diversity and complexity of pharmaceutically relevant molecules. Among these, increasing the content of quaternary carbon centers is regarded as a prime tool for increasing the three-dimensionality of potential drug candidates and thereby "escaping the flatland" as suggested by Lovering and co-workers (Escape from Flatland: Increasing Saturation as an Approach to Improving Clinical Success, F. Lovering, J. Bikker, and C. Humblet, J. Med. Chem. 2009, 52, 21, 6752–6756).

An attractive strategy for creating three-dimensionality is through introduction of spiro centers, which are ring systems that have two rings linked together by one common atom. Visible light-promoted photocatalysis is a sustainable and versatile synthetic tool, which has recently revitalized the radical-mediated dearomatization manifolds aiming at accessing spirocyclic compounds, both in direct and via cascade radical addition/radical spirocyclizations reactions. Via these radical additions to the ipso-carbon of the aromatic ring, the flat aromatic ring gets converted into a three-dimensional, dearomatized spiro-containing rings.

After screening a large number of conditions, such as metal-based and organic photocatalysts, solvent, bases and different ratios of the reactants, Dr. Chao Zhou was able to find the optimal conditions for the reaction. These developed conditions was used to successfully synthesise a large number of spirocyclic chromanones (23 examples, up to 78% yield) and the substrate scope also included late-stage functionalization of the analgesic and anti-inflammatory diflunisal. The reactions were scaled up to 4-5 mmol without any loss of yield by utilising four Kessil lamps (440 nm) and additional fan cooling in a 100 mL round bottled flask. In order to evaluate our mechanism of the developed reactions, Dr. Andrey Shatskiy investigated the fluorescence quenching  of the iridium photocatalyst and these studies showed the strongest quenching from the triphenylphosphine, while no or little quenching were observed for the other reaction components.

In addition to the intramolecular spirocyclization,  we also investigated the potential of the developed protocol for synthesis of spiro-lactams through a related intermolecular mechanism. This reaction was envisioned to proceed through intermolecular addition of the photochemically-generated acyl radical to a N-benzyl-N-(tert-butyl)acrylamide somophile, followed by intramolecular spirocyclization of the formed C-radical intermediate.

This transformation was expected to pose a significant challenge, as the high-energy acyl radical must undergo addition to a somophile in an intermolecular fashion, while outcompeting deleterious HAT and SET processes, that are less pronounced in the complementary intramolecular reaction. To our delight, the optimized conditions were readily applicable for the proposed intermolecular spirocyclization reaction, and its scope was evaluated on a range of benzoic acid and acrylamide derivatives. Altogether, 11 substrates with different substitution were synthesised (up to 81%), including a late-stage functionalization of Adapalene.

For a more detailed discussion of the results, please check our paper in Communications Chemistry. 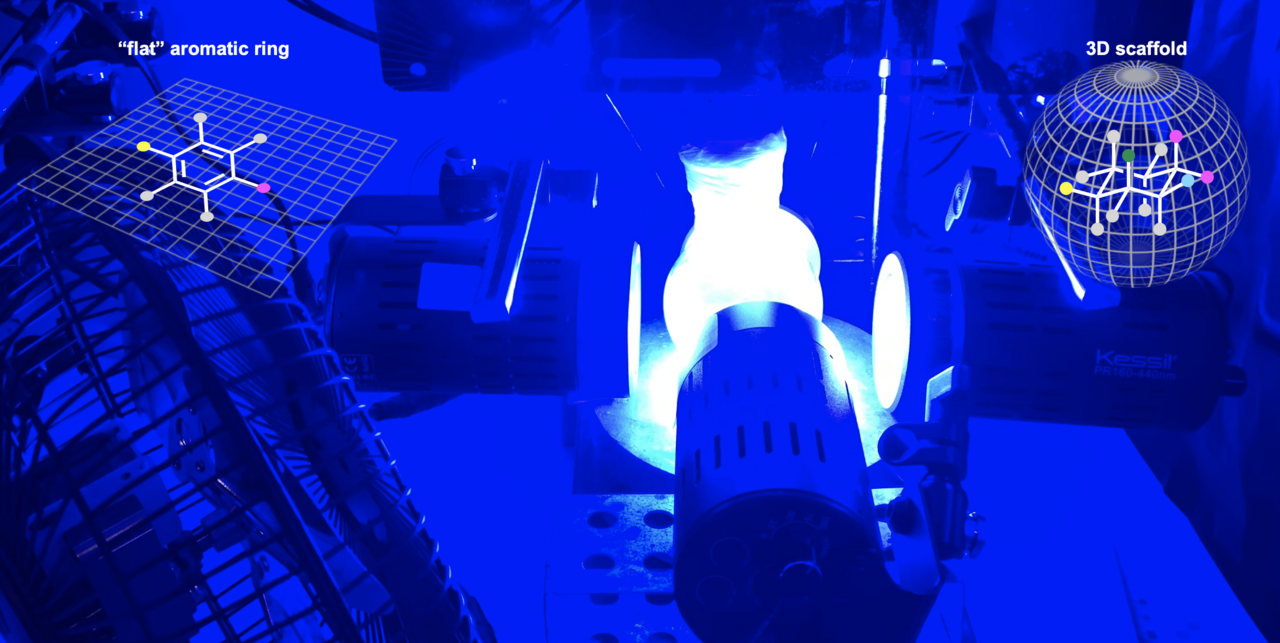