Determining the nature and extent of covalency in actinide-ligand chemical bonding is a central goal of actinide science. Now, a uranium(VI)-nitride has been measured by nitrogen-15 NMR spectroscopy revealing remarkable shielding properties that suggest a highly covalent bond.
Steve Liddle
Professor and Head of Inorganic Chemistry, The University of Manchester
Follow
Like Liked by Sorrel Bunting
0

In 2012 the Liddle group reported an isolable, terminal uranium(V)-nitride triple bond. This was followed in 2013 by the uranium(VI)-nitride analogue. These two papers set the scene for probing these long-sought linkages, with papers examining the electronic structure of a family of uranium(V)-nitride derivatives, and the reactivity of these nitrides with CO, CO2 and CS2, and H2.

In the 2013 report of the terminal uranium(VI)-nitride linkage, the Quantum Theory of Atoms-in-Molecules (QTAIM) method returned computed bond critical point data of that linkage which suggested it is highly covalent, and, surprisingly, more covalent than group 6 analogues. Computational studies of heavy atoms in relativistic regimes has become quite reliable, but it is always desirable to experimentally confirm computed properties, especially when they are surprising and buck anticipated trends. We had been keen for some time to measure the 15N NMR spectrum of the terminal uranium(VI)-nitride, since NMR spectroscopy presents an elegant method to probe the covalency of bonded elements, but at first we were not able to observe any 15N resonances for this complex. However, recently we cracked the problem, and the result is a solution and solid-state NMR study published in Nature Communications that has allowed us to unpick the terminal uranium(VI)-nitride triple bond in great detail, and to confirm the original computational finding.

We first revisited the synthesis of the target 50% 15N-labelled uranium(VI)-nitride 1*, and secured a more convenient and higher yielding method to prepare it, see reaction scheme above. 15N NMR spectroscopy can be challenging to do, due to the low molar receptivity and high longitudinal relaxation time constant of the 15N nucleus. However, in consultation with our local NMR experts an acquisition sequence was identified that revealed a single resonance at ~970 ppm (with respect to nitromethane at 0 ppm). This was quite a surprise, as this was the highest frequency, so most deshielded, nitride chemical shift to date, being around 300 ppm away from the previous maximum. This prompted measurement of the solid-state 15N NMR spectrum, and although this too had its fair share of technical challenges to overcome we eventually obtained a spectrum that was consistent with the solution data and that also strongly indicated an axially symmetric shift tensor, as would be expected for the nitride in 1*. This was due to a huge chemical shift anisotropy of ~2000 ppm – it was clear that the nitride linkage in 1* was significantly redefining the parameter space of 15N NMR spectroscopy.

With experimental data in-hand, we turned to computational methods to unpick and understand what we had found. We identified that the B3LYP functional did a fair job of reproducing the experimental 15N NMR data, so focussed on that functional. Previously, we had modelled the uranium(VI)-nitride bond with the computationally less-expensive BP86, but we were pleased to find that the overall analysis, using Natural Localised Molecular Orbitals (NLMOs) showed very little variance between the two functionals, giving confidence in the computational treatment.

The isotropic shielding of an element under examination by NMR spectroscopy is composed of diamagnetic, paramagnetic, and spin-orbit shielding components. Summation of these terms and then subtraction from the reference standard isotropic shielding yields the isotropic chemical shift. The diamagnetic shielding varies very little, since it derives from tightly-bound core electron densities. It also turns out that there is very little of the spin-orbit shielding component. This was at first a surprise, since large 5f-orbital contributions to the bonding of 5f-elements tends to impart significant spin-orbit contributions to the isotropic chemical shift, and indeed the NLMO analysis of 1* finds major uranium 5f-contributions to the bonding of the uranium(VI)-nitride linkage. However, the NLMO analysis also found almost no nitrogen 2s orbital character in the bonding, which means little Fermi contact, which is the mechanism for spin-orbit transfer. This then leaves the paramagnetic shielding term as the dominant controlling factor over the observed isotropic chemical shift of the nitride.

Ramsey’s formula provides a good framework within which to relate covalency to chemical shieldings. Once it is established that there are not any particularly large energy gaps between ground and excited state orbitals that mix in a magnetic field, nor any major temperature independent paramagnetic effects, which are criteria that 1* meets, then the problem reduces to a very simple relationship: the larger the paramagnetic shielding term is, the more covalent the linkage involving the NMR-reporting nucleus is – this is precisely what is observed in the 15N NMR data of 1*. To cut a long story short, we were able to identify that the isotropic chemical shift of the nitride in 1* derives from field-induced mixing of the UN σ/π* and π/σ* orbitals, as shown in the figure above, parts a and b respectively, which was the basis for a full NLMO-NMR analysis that reached the same conclusion.

Of course, whilst understanding 1* in great detail is obviously highly desirable, it is just one molecule. We therefore turned our attention to putting it in context, and examined another 16 complexes in the literature that have 15N NMR data for various M-N bond types. We examined a variety of bond orders plotted against chemical shift, and the result for the Mayer Bond Order analysis is shown above. Given the range of complexes and their widely varied natures the correlation is remarkably good, and it underscores just how covalent the uranium(VI)-nitride linkage in 1* really is; thus, the result of all of the above, is experimental confirmation of a computational prediction.

By providing experimental confirmation of a previous theoretical prediction, this work has demonstrated the powerful nature of using NMR spectroscopy to directly address the central, fundamental goal in actinide science of quantifying the nature and extent of covalency in actinide-ligand chemical bonding. These experimental data also serve to highlight the predictive power of modern 5f quantum chemistry. 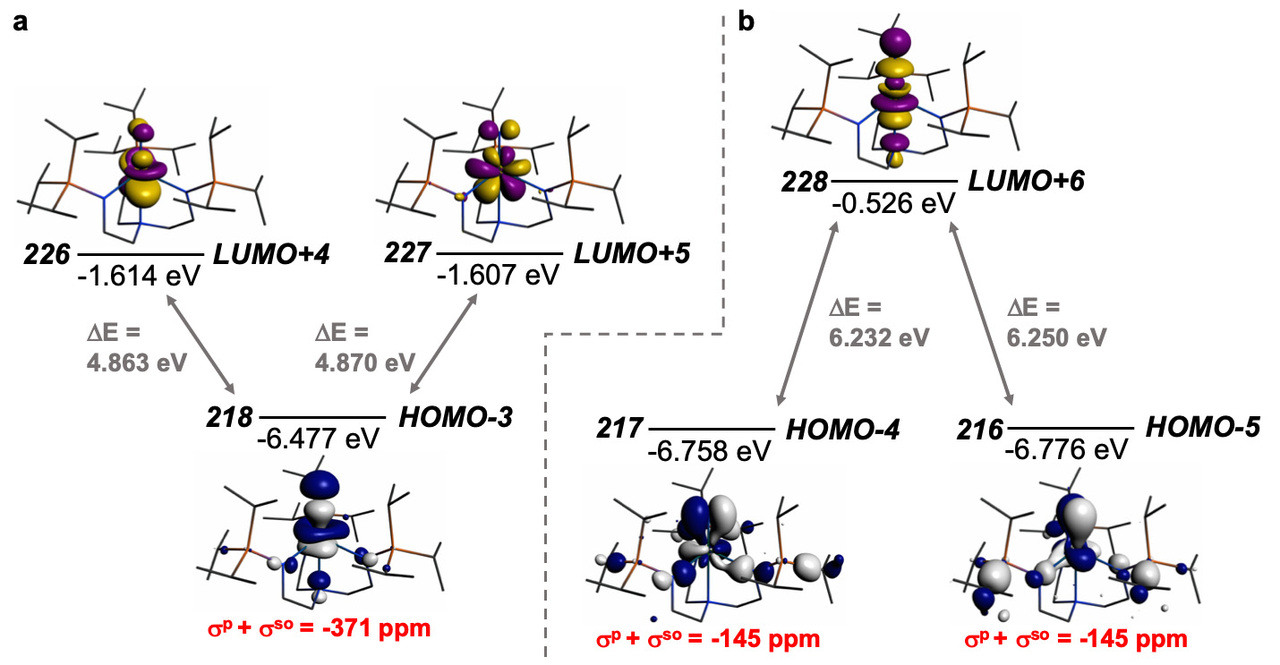 Determining the nature and extent of covalency in actinide-ligand chemical bonding is a central goal of actinide science. Now, a uranium(VI)-nitride has been measured by nitrogen-15 NMR spectroscopy revealing remarkable shielding properties that suggest a highly covalent bond.