Finding a chokepoint of oxygen transfer in Ni–Fe CO dehydrogenase

Ni–Fe CO dehydrogenases (CODHs) can oxidize CO at a high rate, but their O2 sensitivity is a drawback for industrial applications. Revealing an essential residue in substrate tunnels of CODHs is the key to the development of biocatalysts capable of selectively removing CO from industrial flue gases.
Suk Min Kim and Yong Hwan Kim
2 contributors
Like Liked by Sorrel Bunting and 1 other
0

Ni–Fe carbon monoxide dehydrogenases (CODHs) are able to oxidize CO with a high rate, but their O2 sensitivity is a major drawback for their industrial application. This work shows that CODHs can be tailored for industrial or gas cleaning processes by engineering the selectivity of their gas channel…

Carbon monoxide (CO), one of the critical C1 compounds in the chemical/energy industry, is an abundant and cheap source of carbon and energy1-3. However, as an anthropogenic air pollutant in industrial flue gas and an agent of human toxicity, CO is problematic. Biocatalytic CO dehydrogenase (CODH)-based oxidation, which is capable of selective and sustainable removal of CO from waste gas mixtures and its conversion to CO2 at room temperature, is a promisingly feasible and attractive technology for CO detoxification, carbon utilization, and energy generation from CO waste gas that includes, notably, the metal-catalyst inhibitors (ex. sulfur, chlorine, tar). Due to the permanent inactivation of CODHs under oxygen-stress conditions, their utilization for CO conversion under atmospheric conditions is challenging to say the least4-6. Therefore, we have pursued the development of effective and stable, tunnel-redesigned CODHs that show high CO oxidation rates even in the atmosphere.

The most exciting point is that the only significantly different tunnel residue was commonly located in a position of hydrophilic gas tunnels between O2-sensitive ChCODH-II and less O2-sensitive ChCODH-IV. All less O2-sensitive CODHs showed a narrow tunnel radius at the position (as a bottleneck). Consequently, we could hypothesize that oxygen molecules can pass through the hydrophilic tunnel and be selectively blocked by obstruction of the common bottleneck position. Notably, the typical bottleneck of substrate tunnels is found in most Ni–Fe CODHs, including CODH/ACS complexes involved in the Wood–Ljungdahl pathway.

We aimed to design a common bottleneck of Ni‒Fe CODH gas tunnels for high O2 tolerance, achieving up to 148-fold elevation by in-depth analysis of structural and molecular dynamics. Finally, we demonstrated CO conversion from industrial flue gases discharged from Hyundai Steel (one of the world's largest steel producers) under near-atmospheric conditions, as illustrated in the Figure above. This work reveals the A559 residue in all highly O2-sensitive CODHs from anaerobes. Our work with various syngas mixtures (CO, CO2, and H2) has significant biotechnological implications in demonstrating that this single mutation may enhance CO and CO2 bioconversion in industrial processes.

Developing a stable O2-tolerant enzyme as a CO-transformation catalyst would be an important stepping stone to effective carbon utilization. We believe this study will provide valuable insights into that biocatalyst and its application for using carbon in real flue gas without pretreatment. 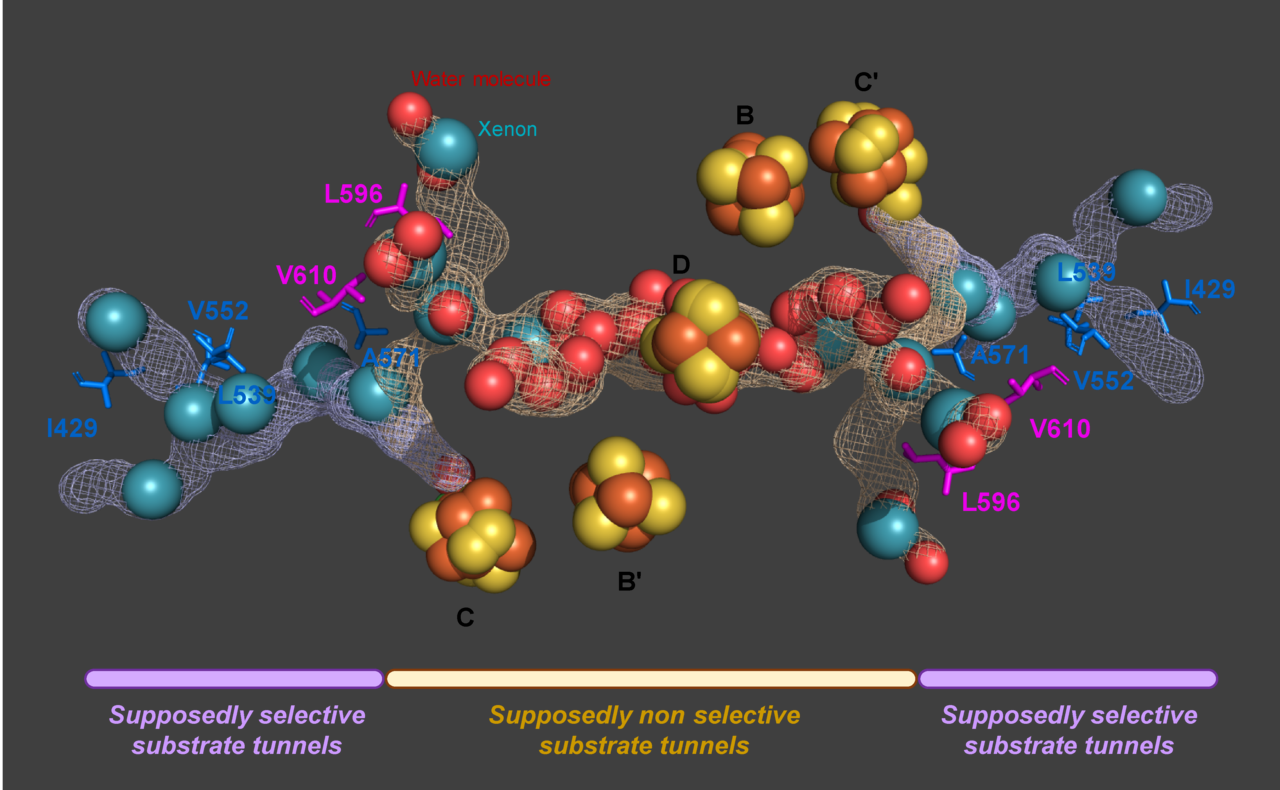 Finding a chokepoint of oxygen transfer in Ni–Fe CO dehydrogenase

Ni–Fe CO dehydrogenases (CODHs) can oxidize CO at a high rate, but their O2 sensitivity is a drawback for industrial applications. Revealing an essential residue in substrate tunnels of CODHs is the key to the development of biocatalysts capable of selectively removing CO from industrial flue gases.