Epoxides are important structural elements found in a wide variety of natural products and reactive intermediates in biosynthetic pathways. Epoxide ring opening reactions can proceed via nucleophilic addition under acidic or alkaline conditions, to generate products with inversion of stereochemistry. In biological systems, most canonical epoxide ring opening reactions are catalyzed by epoxide hydrolases (EHs), involving cofactor-independent hydrolysis of epoxides to vicinal diols. In some cases, oxidoreductases (ORs) can transform an epoxide to an alcohol in a cofactor-dependent stereoselective reductive manner. In this study (https://doi.org/10.1038/s41467-022-32641-1 ), we report that flavin can mediate epoxide ring opening reactions in both reductive and oxidative ways to generate multiple products.

Fluostatins (FSTs) belong to benzofluorene-containing atypical angucyclines with a highly oxidized A-ring and were recently isolated from the marine actinomycete Micromonospora rosaria SCSIO N160. The 2,3-epoxide ring in FSTs, such as FST C (1), is thought to be precursor for several FSTs with diversely oxygenated A-rings containing trans-vicinal diols or mono-hydroxylated analogs. However, the underlying epoxide ring opening mechanism or enzymology remains mysterious.

We have previously demonstrated that the epoxide hydrolase Alp1U from the kinamycin biosynthetic pathway can catalyze non-regioselective epoxide ring opening reactions of FST C (1) at either C-2 or C-3 to afford two trans-vicinal products. However, the Alp1U homologue FlsH from the FST biosynthetic pathway was inactive in performing epoxide hydrolyzing reaction of 1. In contrast, FlsH was characterized as a deacylase. We initially hypothesized that FlsH might require a protein-partner or an exogenous cofactor to assist the epoxide hydrolysis reaction. Indeed, incubation of 1 with FlsH and Fre (flavin reductase of E. coli origin) in the presence of NADH led to multiple products. However, it was evaluated that flavin reductase alone was able to mediate similar reactions, as well as several non-FST related flavoenzymes. These observations led to the discovery that FAD and NADH are both sufficient and necessary to facilitate the nonenzymatic decomposition of 1 to similar multiple products. Subsequently, the products were structurally characterized to have a single hydroxyl group at C-2 (7 and 8), or a vicinal diol at C-2 and C-3 (3 and 9), or undergoing rearrangement to have a contracted five-membered A-ring (10) or a bridged and expanded seven-membered A-ring (11)  (Figure 1). To probe the underlying mechanism, efforts were taken to examine the effects of pH values, D2O labeling, 18O labeling, time-course experiments, the presence and absence of different flavin cofactors and/or NADH.

The cumulative experimental data support a reaction mechanism of opening the 2,3-epoxide ring in 1 by both a reductive manner via a putative enol intermediate (13), and an oxidative manner through a hydroperoxyfluostatin intermediate (14) with molecular oxygen as the oxidant (Figure 2). To the best of our knowledge, this is the first study to show that flavin cofactors can independently catalyze reductive and oxidative epoxide ring opening reactions. In addition, we have compared these nonenzyme reactions with the reductive epoxide ring opening reactions catalyzed by the oxidoreductase RslO5 from the rishirilide biosynthetic pathway, and have provided evidence to support distinct mechanisms.

Fiugre 2. The proposed mechnism for the epoxide ring opening reaction.

Finally, we have demonstrated that this in vitro flavin-enabled nonenzymatic epoxide ring opening reaction can be generalized to other natural products and organic compounds harboring an epoxide adjacent to a carbonyl group that is conjugated to an aromatic moiety. In conclusion, the chemistry of flavins is expanded to epoxide ring opening reactions and the flavin chemistry identified in this study may be applicable to other epoxides and thus holds promise as a useful tool in organic synthesis. 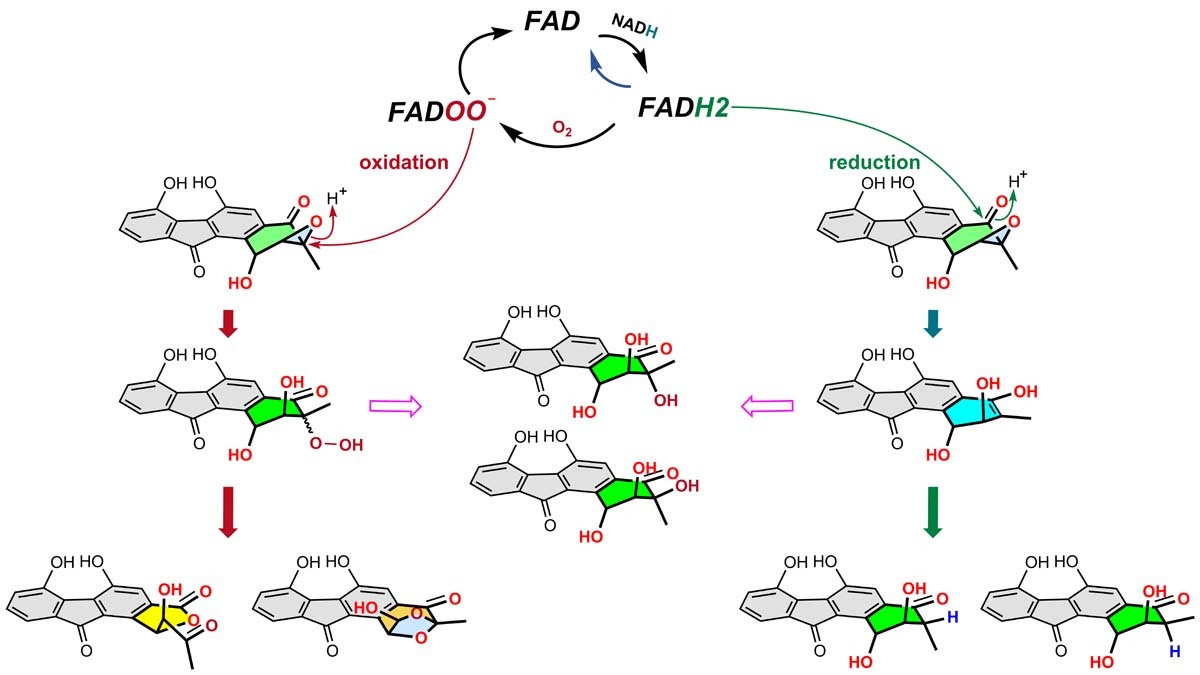