From a glass of beer to modified DNA

2,6-diaminopurine is an alternative DNA base that could act as an adenine analog. In our work, we demonstrated that it could efficiently repair DNA lesions. This photostable version of DNA could have been important on early Earth, or could find applications in nanotechnology or synthetic biology.

“Wait, what paper was this exactly?” Dominik asked after I had explained my favorite read in recent months. It was in Cambridge MA, during a warm May evening in 2016 and I was visiting the Harvard-Smithsonian Center for Astrophysics for the first time. My host invited me to a dinner at Harvard Square to introduce me to several local colleagues and Dominik was one of them.

“It was a JACS paper published this year. The authors showed that specific damaged DNA fragments, like GATT, could repair themselves after continuous exposure to light.” I said, taking another sip from the glass of Belgian ale. “It was a German group from the LMU in Munich.”

“Wow, it seems that you’re talking about my paper!” Dominik exclaimed with a surprised smile. He had just moved to Harvard for a postdoctoral position and it didn’t occur me that he could be one of the co-authors of this fascinating article1. That evening and during the remaining days of my visit, we had lively discussions about the possible mechanism of DNA self-repair and ways to study it in the future. It also inspired me to look much deeper into this phenomenon.

When exposed to ultraviolet light, DNA is prone to the formation of photodamages, which can prevent its fragments from biochemical activities. The most common damages are undesirable linkages between adjacent nucleobases, i.e. DNA building blocks, which significantly distort the structure and function of DNA. These linkages are frequently formed between thymine (T) bases and are often called T=T dimers. Nature developed complex enzymes, which can locate and repair the damaged sites of DNA. However, such complicated machinery likely evolved after the emergence of first living organisms, therefore, the first RNA and DNA oligomers formed on Earth were vulnerable to the deleterious effects of UV. Dominik’s work implied that DNA sequences, capable of performing self-repair without enzymes, could be selected from a rich pool of less photostable oligomers1.

During the next two years after meeting Dominik, I focused on studying the DNA self-repair process by means of quantum chemistry. Thanks to Dominik’s support, we also contacted the rest of the experimental group from Munich to corroborate our computationally derived model. Eventually, in 2018, we published a mechanistic rationale demonstrating that the GATT sequence could undergo charge separation after the exposure to UV light2. This in turn enables sequential transfer of an electron from guanine (G), through adenine (A) to the damaged thymine bases (T=T) and restoration of the native structure of the DNA fragment (Fig. 1)2. 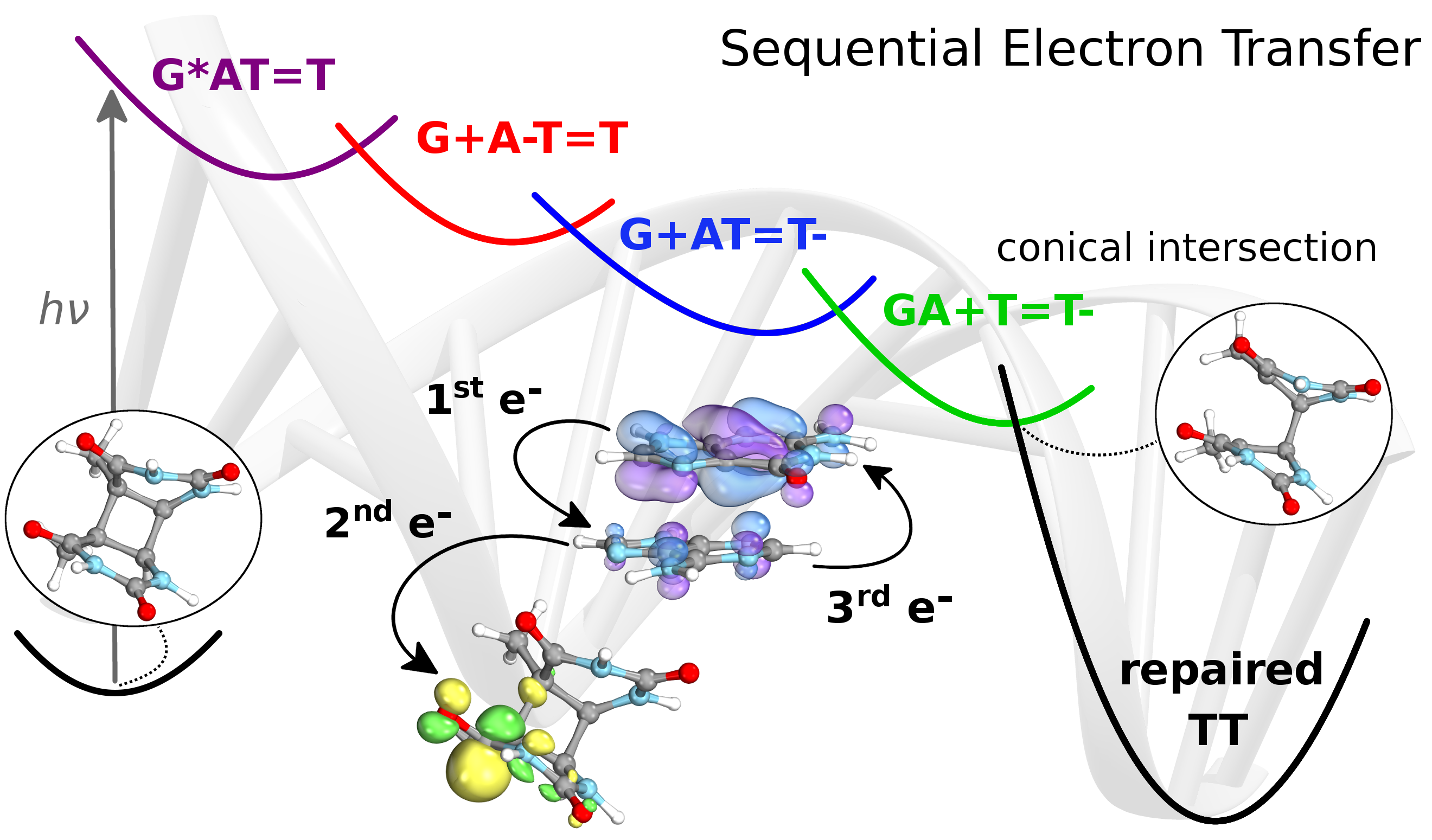 Although Dominik’s work was the most prominent example of DNA self-repair, GATT was capable of repairing only 25% of its damages1. Hence, I kept asking myself the question “Could we find a DNA fragment, which is much more efficient at repairing itself?”. Eventually, I realized that this could be achieved only for DNA fragments, which undergo charge separation at much lower energies than canonical DNA. We needed an alternative DNA component that could easily donate electrons. After quick computational pre-screening of various modified nucleobases, I discovered that 2,6-diaminopurine possessed some of the most promising electronic properties. In addition, it could act as an excellent adenine analog by selectively recognizing its Watson-Crick partner, thymine. 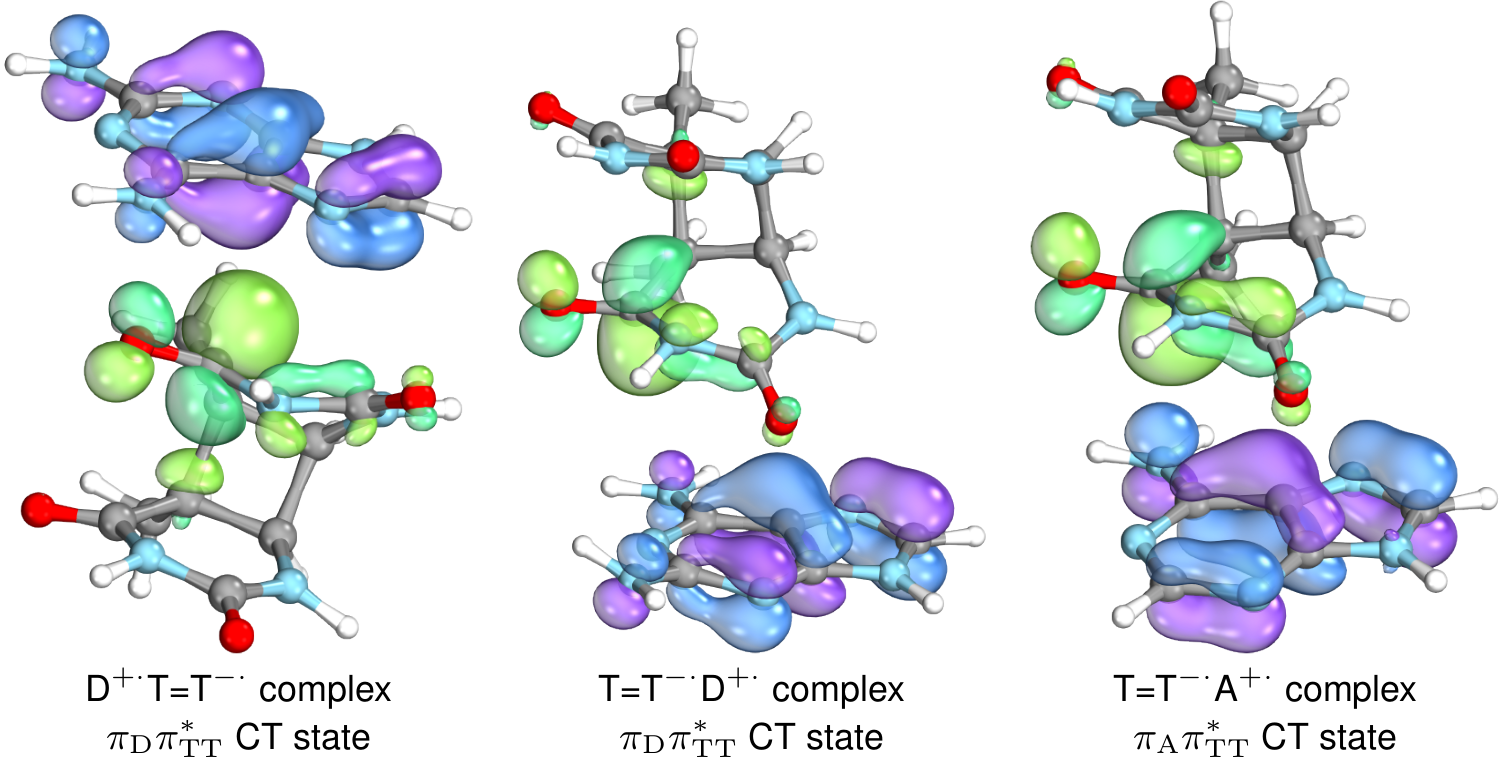 Together with Petr Stadlbauer and Holger Kruse from the Czech Academy of Sciences, we soon gathered more computational data for DNA trimers containing 2,6-diaminopurine. We knew that we were onto something, since electron transfer seemed to be the most energetically favorable process occurring in these molecules after absorption of a photon (see Fig. 2). Our predictions were soon validated by our collaborators from the University of Gdańsk, including Magda Zdrowowicz and Paulina Spisz, who performed UV irradiation experiments demonstrating self-repair yields of 85-92% for the modified DNA trimers (see Fig. 3). In fact, the modified DNA trimers were so photostable that the generation of photodamages was only possible after long hours spent on accumulation of the photoproduct and numerous repeats of the same experiments. In contrast, the canonical (biological) counterparts of these DNA trimers exhibited the opposite trend, namely, high photodamage and minor self-repair yields. In addition, our colleague Nick Green from the MRC LMB in Cambridge was able to show a proof-of-principle synthesis of 2,6-diaminopurine nucleosides under prebiotically plausible conditions3. This diverse pool of results became the basis for the first draft of our research article that I wrote during the first lockdown of the COVID-19 pandemic. Most importantly, its publication could only be achieved thanks to this wonderful team with truly diverse expertise and backgrounds. 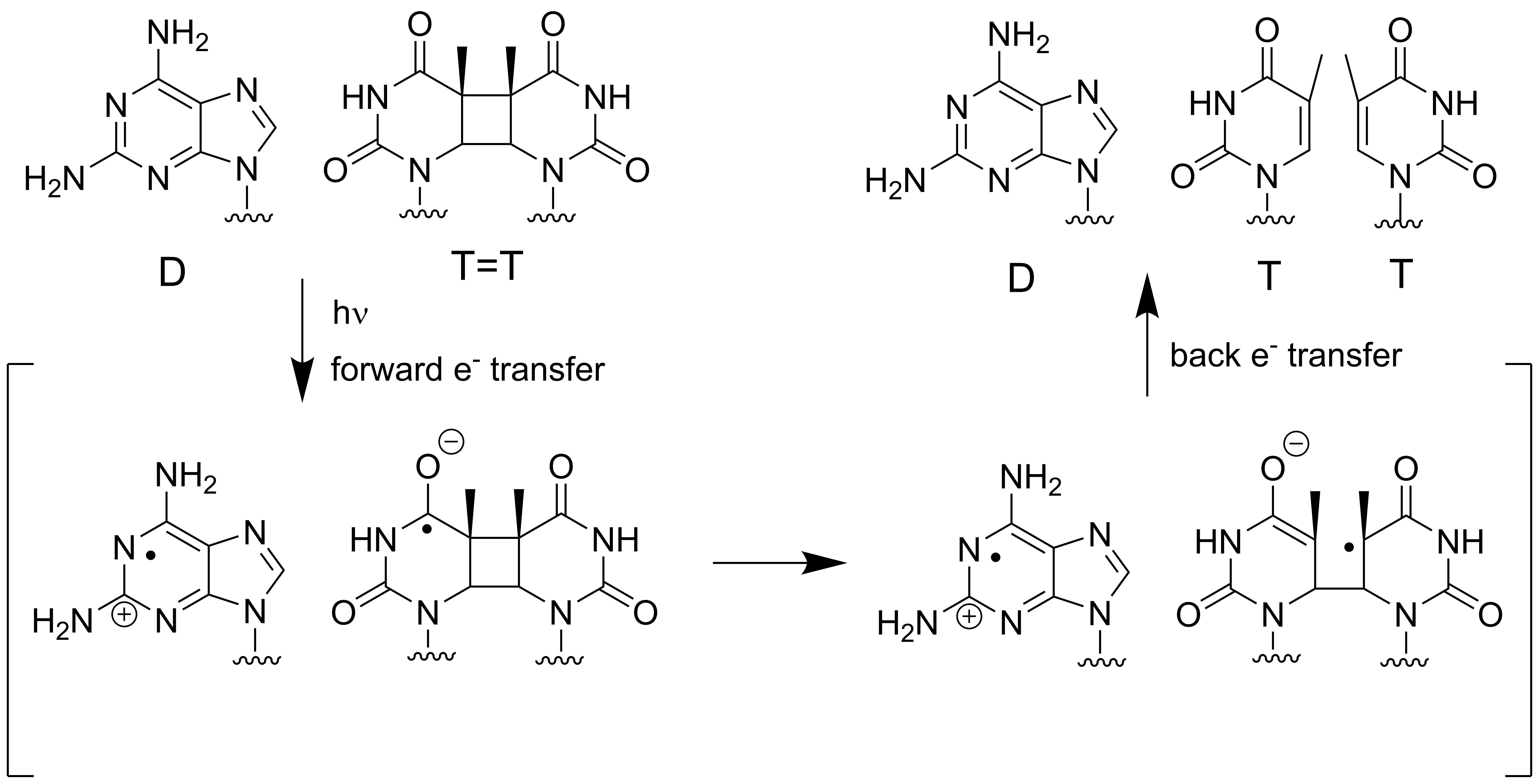 Potentially prebiotic role of 2,6-diaminopurine and other implications

2,6-diaminopurine was suggested as a potentially important alternative nucleobase even before we started considering it for DNA self-repair. It was previously discovered in meteoritic materials4 and was even suggested to enhance the rate of nonenzymatic RNA and DNA replication5. Only two weeks before the final publication of our manuscript in Nature Communications3, the journal Science released a series of three research articles about bacterial viruses (bacteriophages) that have adenine replaced with 2,6-diaminopurine in their entire genomes6. This discovery showed that 2,6-diaminopurine can be compatible with biology as we know it. In addition to the enhancement of photochemical and thermal stability of DNA strands containing this nucleobase, it implies possible applications in fields such as synthetic biology, phagotherapy or DNA-based nanotechnology. It also reinforces the plausible role of 2,6-diaminopurine at the advent of life. However, much more work is still needed to verify these suggestions.

Sometimes, I ask myself the question “Would I ever decide to explore this research direction, if it hadn’t been for this one serendipitous meeting in the restaurant at Harvard square?” It is remarkable, how a simple chat with a cup of coffee or a beer can sometimes spark new ideas and lead to intriguing discoveries. Although the pandemic taught us how to get the best from video calls and optimize our international collaborations, we are all aware of the limitations. I genuinely hope that COVID vaccinations will allow us to come back to some of these inspiring in-person visits and meetings. 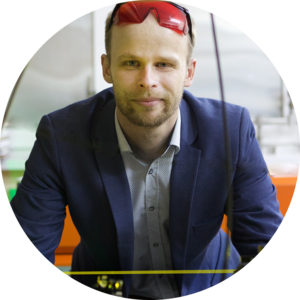