Crystal nucleation processes are difficult to probe experimentally because of the spatial and temporal scales involved. Now, the heterogeneous nucleation of three different metals has been observed by electron microscopy with atomic resolution—using single-walled carbon nanotube as test tubes—and, i…

About 2450 years ago, ancient Greek philosopher Democritus proposed the theory that everything is composed of "atoms". With the development of science and technology, the existence of atom is proved. We are even able to directly observe the atoms by aberration-corrected transmission electron microscope (AC-TEM). Metal crystals are composed of their atoms lined up in neat lattices. But, how the metal crystals form from single atoms is still a mystery.

Till now, two theories including ‘classical nucleation theory’ and ‘two-step nucleation mechanism’ have been developed to describe the nucleation of crystals1. The classical nucleation theory describes crystal formation in a single step, by attachment of individual monomers (a single atom) to an ordered structure overcoming a single free-energy barrier, just like stacking Lego building blocks. Two-step nucleation mechanism is more complex. It involves the initial formation of an amorphous ‘precursor’ phase, which is then subsequently superseded by a more stable crystalline phase, or formation of stable species which never dissociate. Because the in-situ and atomic observation of nucleation process of metals at the atomic level has been impossible, the mechanism of the metal crystallisation remains unknown.

In our current work2, we combined in situ low-voltage AC-TEM with single walled carbon nanotube (SWNT) as nano test tube (Figure 1), which has been previously applied for investigating the catalytic reactions between carbon and metal 3,4 and dynamics of dirhenium molecules.5 The nano test tube is very thin and transparent for in-situ TEM imaging of the metal atoms, which helps us to achieve unprecedented spatial resolution. In addition, we employed a mobile capsule of amorphous carbon as ‘atomic injector’, delivering metal atoms within the nano test tube to the site of crystal nucleation. This method enabled recording the atomistic mechanisms of the nucleation of metal, step-by-step, allowing us to not only to detect distinct nucleation stages, but also film the atom gathering process during nucleation or atomic cluster coalescence in real time – important stages preceding the crystallisation step. This methodology sheds light on the underexplored area of crystal nucleation at the sub-nanometre level.

Figure 1, Applying SWNT as nano test tube, the nucleation of metal has been observed with atomic resolution.

We have determined that the nucleation of metal crystal proceeds via a two-step mechanism in the case of three different metals: γ-Fe, Au and Re5. The main difference between the metals is that the heterogeneous nucleation can be triggered by different causes: the gathering of individual atoms (Fe), ordering of atoms in an amorphous nanocluster (Au), or coalescence of two separate amorphous sub‑nanometre clusters (Re) (Figure 2). We have directly observed the existence of a liquid-like metastable precursor – a fundamental component of the two-step nucleation mechanism, and demonstrated an additional energy barrier, which the amorphous precursor has to be overcome in order to crystallise. In addition, atomic resolution of AC-TEM allowed us to estimate the number of atoms in the nucleating metal clusters. We found in the case of all three metals the critical size is below 2 nm, and the number of atoms necessary for successful crystallisation of γ-Fe and Re lies between 10 and 20.

Figure 2, the nucleation processes of γ-Fe, Au and Re in SWNTs.

The above results were recently published in Nature Chemistry: 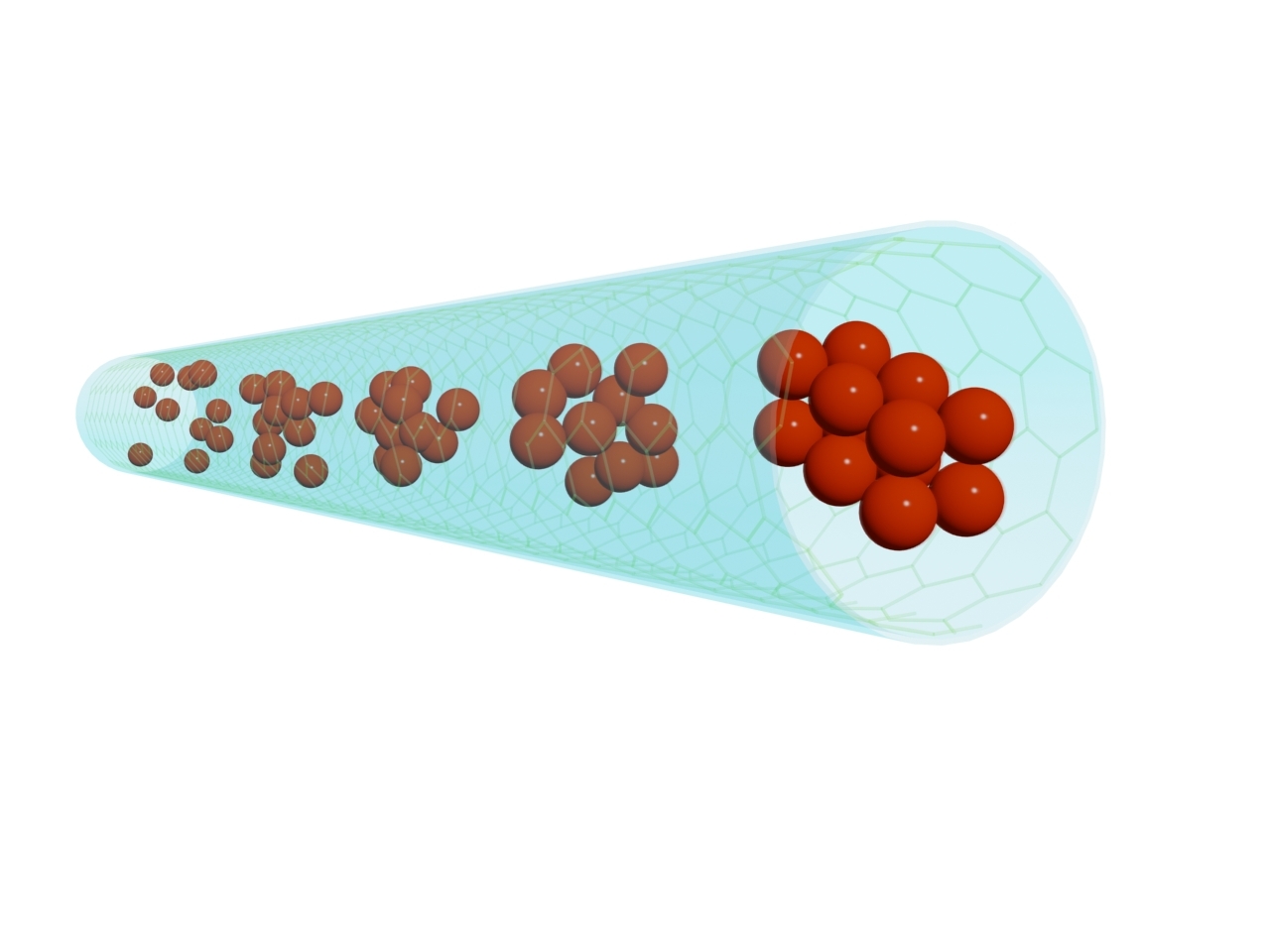 How metal nucleates from single atoms?