The transformation of amides have attracted tremedous attention in synthetic community. However, the activation of amides is challenging, majorly devoted to the resonance stability of N−C(O) bond (15-20 kcal/mol). Although a few transition metal catalyzed C-N activation of some activated amides have been achieved in cross-couplings (Fig. 1a), the major transformation of amides were initiated by the addition of highly active organometallic reagents such as organolithiums and Grignard reagents onto their carbonyl groups to generate a tetrahedral intermediate Int-I (Fig. 1b). The transformation of this Int-I intermediate is vital for the following chemoselective synthesis. Intermediate Int-I is generally easy to eliminate amino group to produce more reactive ketone, in which the addition of the organometallic reagent to ketone would in situ occur to give overaddition product tertiary alcohols, although the elimination of oxyl group might also occur to finally generate tertiary amines in some special cases. To chemoselectively obtain ketones, efforts have been devoted to stablize the Int-I intermediate to overcome the overaddition obstacle. However, these strategies required structurally special tertiary amides to achieve chemoselective ketone synthesis from amides. Another powerful activation approach is the pre-O-acylation of amides using Tf2O to generate highly electrophilic intermediate Int-II. In this mode, reactive organometallic reagents R-M were required to react with Int-II to form intermediate Int-III, which gave ketones by acidic work-up or produced amines by another nucleophilic attack (Fig. 1c). This strategy was limited to secondary and tertiary amides. 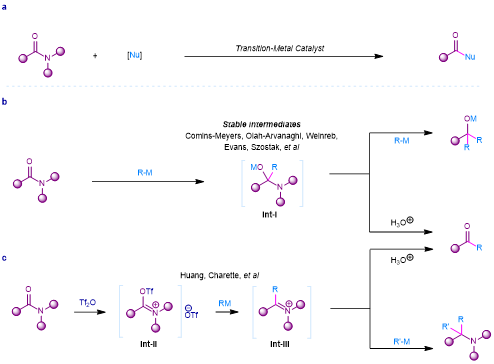 1,1-Diborylalkanes as a special type of gem-dimetallic compounds, which could provide α-boryl carbanion synthons via deprotonation or Lewis base coordination. The addition of α-boryl carbanion to amides may give tetrahedral intermediate Int-IV. Differently, this intermediate bears a β-boryl group which may result in chemodivergent B-O or B-N eliminations to generate enamine En-I or enolate En-II. This enolization effect will provide advantages in blocking second nucleophilic attack. Moreover, enamine and enolate are newly generated nucleophiles, and further electrophilic functionalization will provide more functionalized ketones or enamine derivatives from widely accessible amides (Fig. 1d).

If you are interested in the chemodivergent activation of primary, secondary and tertiary amides, check out our article at "Chemodivergent Transformations of Amides using gem-Diborylalkanes as Pro-nucleophiles " in Nature Communications (https://www.nature.com/articles/s41467-020-16948-5).